Singers, poets and volunteers try to revive pluralism in Mosul but old wounds, particularly between different religious groups, linger on. 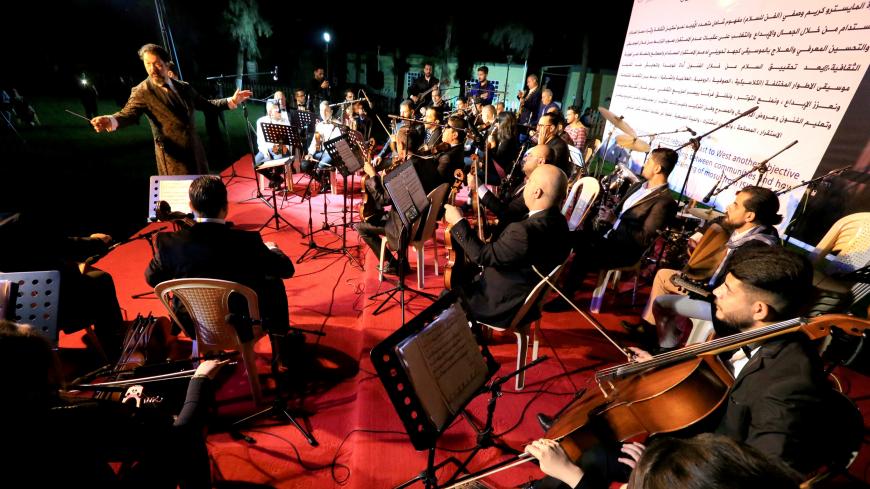 MOSUL, Iraq — The youth in Mosul are using music, art, poetry and volunteer projects to breathe life back into the multicultural city, after its liberation from the Islamic State (IS).

The city’s first music festival took place Nov. 1-2, which featured musicians from all over the country, including Yazidi, Assyrian, Chaldean, Shabak and Syriac groups. One of the main attractions was the Basra Band for Folkloric Arts, an internationally acclaimed group that performs traditional regional and national folk dances.

Young artists, folk dancers, poets and volunteers are organizing festivals, workshops and initiatives that shape civic culture in Mosul. Many of these young people had wanted to leave the city — and the country — during the IS rule that lasted three years between June 2014 and July 2017.

Bandar al-Okeidi, a 22-year-old university student, remembers how his spirits lifted after the liberation of Mosul. Living through the harsh times under the control and oppression of IS and the brutal practices of its fighters against the residents, Okeidi had wanted to leave his hometown. But once Mosul was liberated, he decided to stay and help get the city back on its feet.

He told Al-Monitor, “On New Year's Day following the liberation of the city, I wore the outfit of Santa Clause in the old town and moved between destroyed houses to distribute gifts to the children.”

He said, “One month after the liberation of the left bank [of the Tigris River] young volunteers started cleaning up a hospital. Their initiative quickly spread to social media. Thousands of volunteers started working to bring life back to the city. A competition was organized to clean up streets, schools, hospitals and universities. Within a few months the landscape of the city had completely changed."

Jameel al-Jameel, a Christian blogger and poet who grew up in Mosul, told Al-Monitor that he could not believe the changes the city went through. He had moved to Baghdad in 2012, but returned to Mosul in late 2017.

“I signed my poetry book titled ‘Displaced No. 7’ at the University of Mosul in early 2018. I hadn’t entered the university for six years. I felt free [from my own hatred and anger toward Muslims] despite having hundreds of Muslims around me asking for my book,” Jameel said. “For me this was tantamount to feel liberated from all previous hate.”

Even before IS took control of Mosul, Jameel experienced discrimination based on his religion. Fascinated by the Arabic language and poetry, Jameel enrolled in classes in the Arabic Studies program at the University of Mosul. However, in 2008 extremists had threatened him, saying that a Christian had no business learning the language of the Quran. In May 2010, his school bus, which was carrying Christian students, was attacked on the outskirts of Mosul. Jameel survived, but he was left with burns on his face and body. Another student died in the blast.

During the IS rule, visiting Mosul was impossible; two of Jameel's cousins ​​were kidnapped, raped and killed.

But now Jameel feels optimistic again. “My negative feelings [have been replaced by] a positive energy — a desire to promote peace among the different components of the city,” he said.

In fact, he joined the Bridging Communities of Ninevah Governorate project, which is supported by the Italian organization Un Ponte Per. The project brings together young people for volunteer initiatives, such as workshops about social cohesion, art exhibitions, a soccer tournament and a tree planting event.

Lydia al-Sheikh, a young Yazidi, also took part in some of the volunteer activities. “My aim was to overcome the intolerance and fear [I felt] toward Muslims,” she ​​told Al-Monitor. “After the genocide [by IS] our perception of Muslims changed. It became difficult for us to accept them. But the joint voluntary activities will slowly rebuild confidence between us.”

Although restoring full confidence is complex amid fear of a repeated scenario, such activities offer the youth opportunities to accept each other, Sheikh explained. “Once I finished the workshops, I became convinced that coexistence is possible and that I can influence others. It is true that the past is painful but dwelling on it will make us prisoners of hatred. We must free ourselves from this feeling.”

Yet some of Mosul’s youths have deep fears. Evelyn Yacoub, 19, is from Bartella, an Assyrian town in northern Iraq, about 21 kilometres (13 miles) east of Mosul. She believes the remnants of war in the city can be erased. “The city’s ruined infrastructure and destroyed houses can be rebuilt. But rebuilding the culture is the biggest challenge,” she told Al-Monitor. “Life is returning to the city and people have returned to their jobs. But the IS ideology and its terrorist ideas planted in the minds of some of the city’s residents need more effort to be wiped out.”

Yacoub added, “Mosul’s residents suffered intensely under IS. But precisely because of this suffering young people thought of alternative tools to defeat IS. While confined to their homes, they took courses online from their peers through social media; they read books and learned English; they turned their imprisonment into an opportunity to learn. When the city was liberated from IS, a new generation of young self-educated volunteers emerged — and they are at work now."