From dangerous migrations by sea to the prevalence of plastic waste, young Iraqi artists highlight past and present troubles through street art. 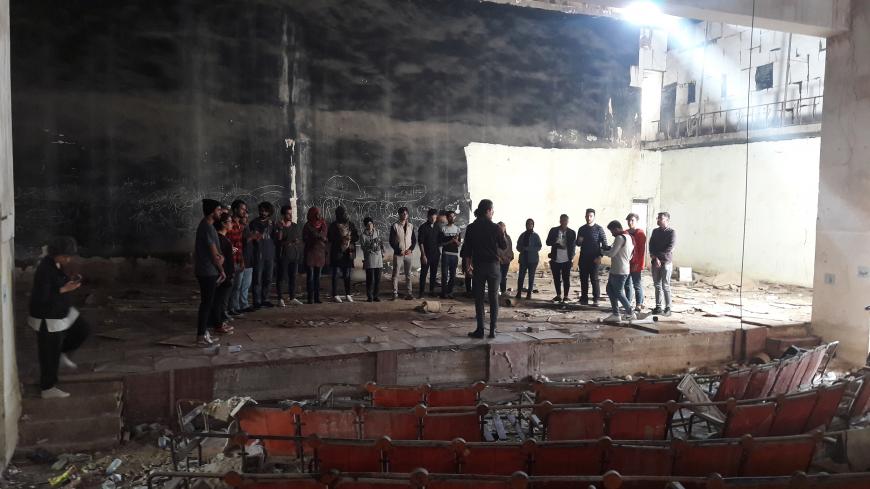 Participants in Baghdad Walk in the abandoned Abu Nawwas Theater, which was bombed by US forces in 2003, Baghdad, Nov. 17, 2018. - Marta Bellingreri

BAGHDAD — “One day Baghdad will go back to its glorious times of beauty,” Hussein Motar, an engineering student and photographer, told Al-Monitor during Baghdad Walk, a narrative walking tour and exhibition about the Iraqi capital. “We are trying to tell the history of Baghdad and raise our voices, to reach the government, to make some major adjustments and changes in historical places destroyed or abandoned.”

Motar chose Rasheed Street, one of the main thoroughfares in downtown Baghdad, as the location to exhibit his photographic project. The street dates to the Ottoman era.

“It took me seven months to take all 20 pictures,” Motar told Al-Monitor. “I first chose 20 old images of Baghdad, and then I took the same ones in 2018. I tried to take them from the same angle as the old photos. I also contacted the families of some people in the old pictures, to visit them and tell them about my idea. It’s not only the photos that are brilliant but the stories behind them.”

Walking along Rasheed Street with other emerging Iraqi artists, as well as passers-by and journalists in tow, Motar stopped at the site of each image and at every historical place to explain the story behind them.

“When I was a child I used to come here with my father,” Motar explained. “The building of the Central Bank of Iraq here on Rasheed Street changed the street. The blocks surrounding it and the Abbasid mosque in front has cut the street in two.”

Motar’s large photographs hang on the walls of various old buildings and mosques along the steet. The group stops to take a close look at each one, and the artist speaks about them and provides information about the area.

“In the beginning, in 2015, Tarkib came together to organize the Festival of Contemporary Arts, for which we had little means,” Ali Amer al-Mikdam, coordinator for public information and media for Dar al-Tarkib, told Al-Monitor. “When the festival started to grow, and the number of artists increased, we needed a space. We have had our space for a year, a place for young artists to meet, organize workshops, exhibit artistic works and other cultural events. Baghdad Walk is one of our events. It is a first in Iraq.” 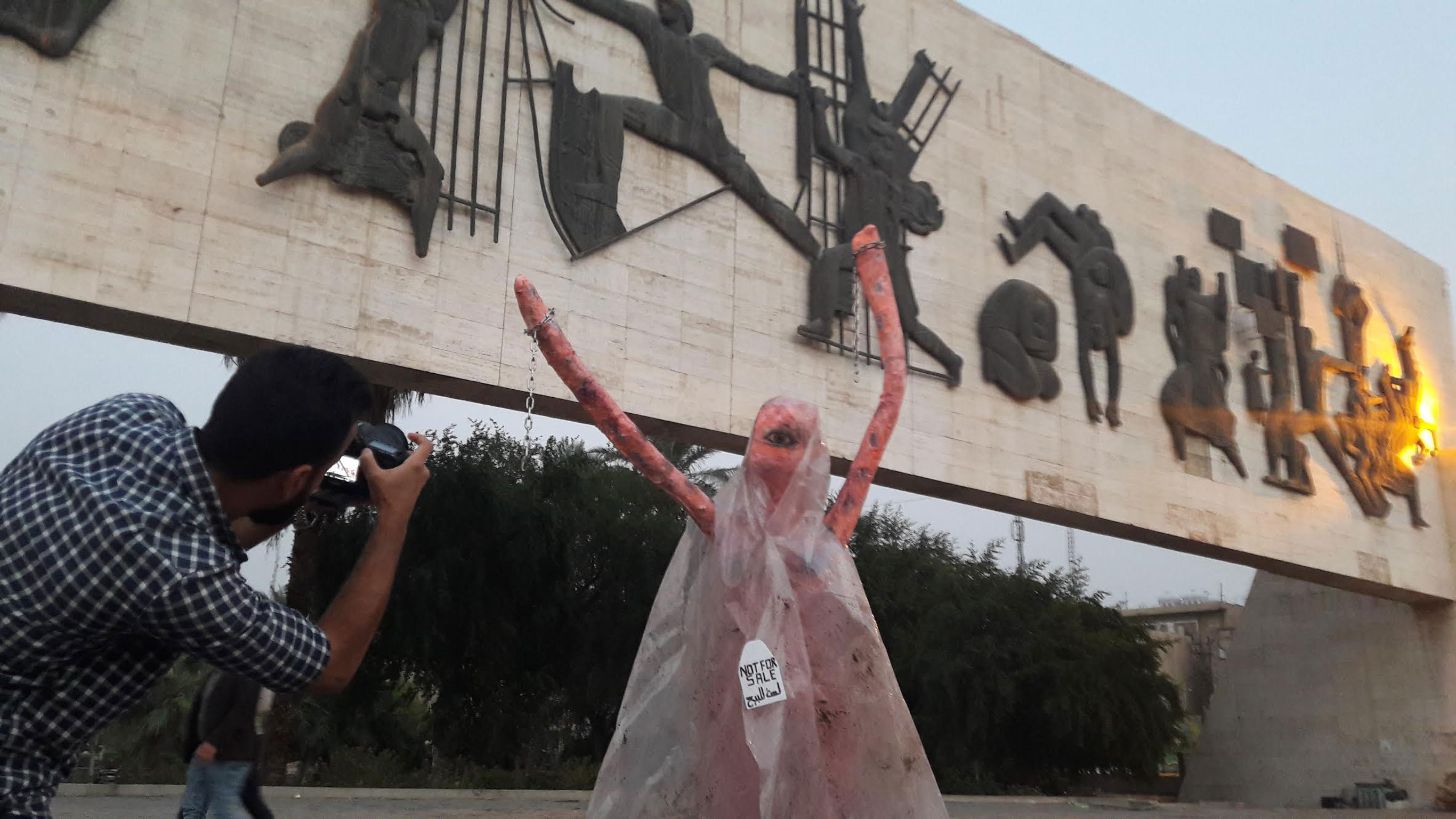 A large number of Iraqi contemporary artists live abroad, and the younger generations at Tarkib felt it was time to work in their city rather than leave. This is the message of Zaid Saad’s piece, which combines installations and sound on the shores of the Tigris River in the Karrada area, near a bombed and abandoned old theater on Abu Nawwas Boulevard.

The work, “Sanduq” (or “Box”), looks at the attempted migrations that took hundreds of Iraqis and thousands of others from all over the Middle East to their demise at sea in the last few years. Eleven stacked cardboard boxes, prepared as packages, are addressed “From Iraq to the Sea,” from insecurity to death. Inside each of the 11 boxes — the 12th package is missing, “because it was never found” — are recordings of people telling stories about their loved ones who left Iraq.

“My message is that we Iraqis have to stay in Iraq for two main reasons,” Saad told Al-Monitor. “First, we need to rebuild our country, and second, Europe treats us like boxes to send and receive, not as human beings seeking protection. They need workers, and so they admit us, if we survive the journey.”

Tabarek al-Atrakchi, a painter and performer, chose to exhibit her work downtown in front of the Kulbankian Gallery, which belonged to a famous Armenian Iraqi. Although the gallery is officially open, it has not held an exhibition in years.

“I chose children’s drawings to represent the future,” Atrakchi said, explaining that she collected drawings from children selling chewing gum and bottles of water on the streets. Most of them had lost their parents in a terrorist or other attack or were simply economically marginalized and therefore working in the streets.

Atrakchi further remarked, “I put bottles and chewing gums next to their drawings. They are living difficult childhoods, but they have a lot of dreams.”

Some of the Baghdad Walk artists, among them the musician and sculptor Ameen Moqdad, staged street performances to involve members of the public with the aim of encouraging them to take a stand or to reflect on something. Moqdad made a huge ball out of a thousand empty plastic water bottles he found in the street. Calling it “1000 Iraqi Lip Prints,” he put it in the middle of a street to denounce waste and garbage.

“It was not difficult to find a thousand bottles,” Moqdad told Al-Monitor. “They are everywhere in Baghdad. I decided to put it in front of the Rida Alwan Cafe, where intellectuals and artists usually meet, because I want them to be the ones to launch the change!”

On iconic Tahrir Square, where Iraqis hold demonstrations, Loay Al Hadhari installed a statue of a woman with chains on her wrists. A tag attached to her shroud-like, nylon attire reads, “Not for sale.” It stands as a reminder of the fate of the Yazidi girls kidnapped, sold and raped by members of the Islamic State (IS).

Hadhari explained, “I covered the body to also highlight the contradiction of Daesh [IS], which wants women to cover up, but they don’t think that it is ‘haram’ — a sin, forbidden by religion — to sell and rape them.”

After participating in the two days of Baghdad Walk, some of the artists involved had a new outlook on life. “I feel like I realized a dream, walking in old Baghdad and telling its stories,” Motar said. “And when you are not alone, but with a team like Tarkib, dreams come true.”