Many Arab artists — Lebanese, Syrian and Iraqi — have been inserting terrorism and violence into their paintings, to show the world the suffering of the Arab peoples. 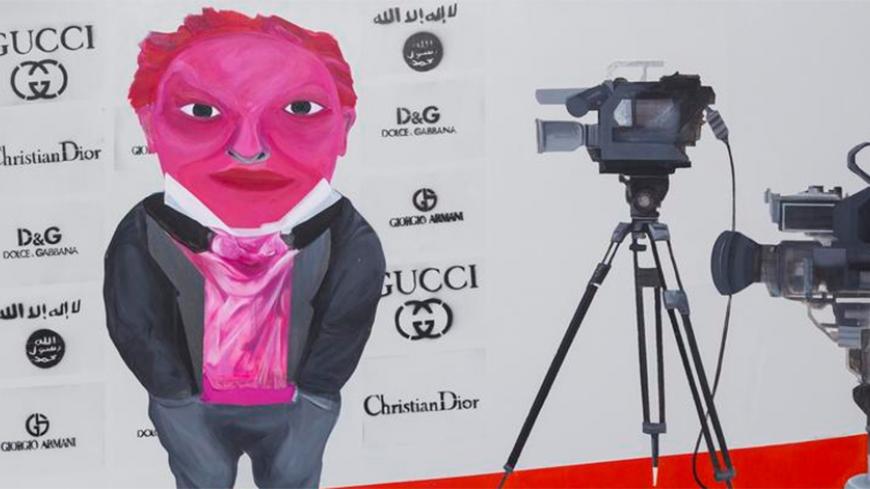 "Brands," a 2014 acrylic on canvas painting by Syrian artist Kais Salman, is currently on display at the Ayyam Gallery in Beirut as part of the "Civilized Society" exhibit. - Ayyam Gallery

A large painting has been sprayed in deep red; others feature figures that look like they were made by children, as well as headless ones. One “sculpture” made with shoes, strings and zippers is striking in both its innocence and gloom. These pieces made by artists from Iraq, Lebanon and Syria have one thing in common: They have all been inspired by the wave of terror destroying their nations and reshaping regional borders.

A large canvas hangs on the wall featuring a man, his mustache shaven, and a long black beard. The art piece belongs to a collection created by Lebanese artist Raouf Rifai featuring the local Darwish (Arabic referring to a simple man) and portraying various social archetypes, including the jihadist Darwish. Rifai’s Darwish refers to the Lebanese male stereotype faced with all sorts of situations; one of the artist's acclaimed pieces is the "Darwish Flambeur," the high roller.

“The idea of Darwish is rooted in Islamic and Ottoman cultures,” said Rifai, who adds that events plaguing the region have influenced his sense of perception and his art. 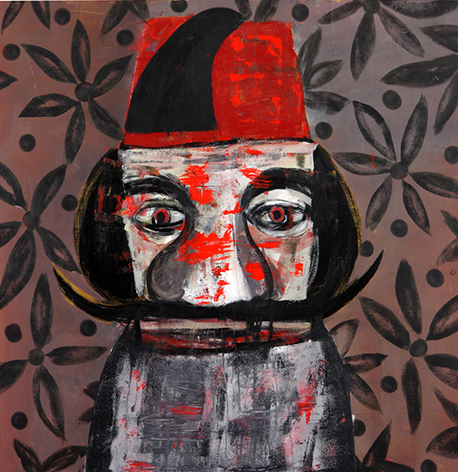 The Darwish jihadist image portrays the cruelty and savagery of organizations that are expanding in our region. But Rifai has also tackled other figures of Lebanese and Arab society: Abu Abed is another typically Lebanese character who faces lifelong challenges.

In the past three years, following the inception of the Syria war, Lebanon has been shaken by a wave of terror; the country has been rocked by bomb blasts and suicide attacks, which have become part of the Lebanese daily life.

Rifai believes that modern terrorists are the "new Hashishin" — the word assassins originates from this group, an order of killers active in the 11th century Abbasid and Fatimid empires who targeted their political opponents using suicide operations.

Today’s terrorists get high on drugs to commit their acts of terror, Rifai said; many believe the Hashishin did the same.

For some artists, terrorism is seen as a means of communication as well as of self-assertion that allows one to exist by eliminating others. Rifai’s “Circus” collection includes a set of artwork that depicts the political events in the wake of the Arab Spring.

“Circus was the title for one of my exhibitions in Saudi Arabia. I used the Karakoz — the Arabic version of a joker — to depict the region’s nationals who are often manipulated like marionettes, with a violent crackdown on activists while terrorists roam free,” Rifai said.

Two other artists of Iraqi origin have also tackled the issue of terrorism and more specifically that of the Islamic State (IS). The organization has taken over, since the end of June 2014, large swaths of Syrian and Iraqi territory and is responsible for the killing of the Sheitat and Abu Nimr tribes, the enslavement of thousands of Yazidi women as well as the crucifixion and burning of people it considers apostates.

IS’ rampage has been evoked in the work of Iraqi artist Nada al-Hasnawi, whose exhibition tells these stories of violence, and more particularly that of the enslavement of women. Her paintings are covered in red, dotted here and there with other colors attempting to break the unity of the bloody canvas.

“I tried to use red-colored spaces to refer to all kinds of violence from which women and Baghdad suffer. The viewer still feels that with these spaces, a glimpse of hope remains and they are not sad paintings,” the artist said in an interview published by Al-Shirfa. Her exhibition "Baghdad will not die in pain" featured 73 paintings that, for the most part, tackled the suffering of women from their displacement to their rape at the hands of terrorist groups. She said her painting "The Virgin of Baghdad" embodies “Baghdad and its steadfastness in the face of tyranny and waves of violence.”

Another Iraqi painter, Aqeel Khreef has used objects from scrap metal to shoes to depict the impact of IS on his country. One can only keep in mind the parallel that can be established here with the famous shoe incident that targeted President George W. Bush. 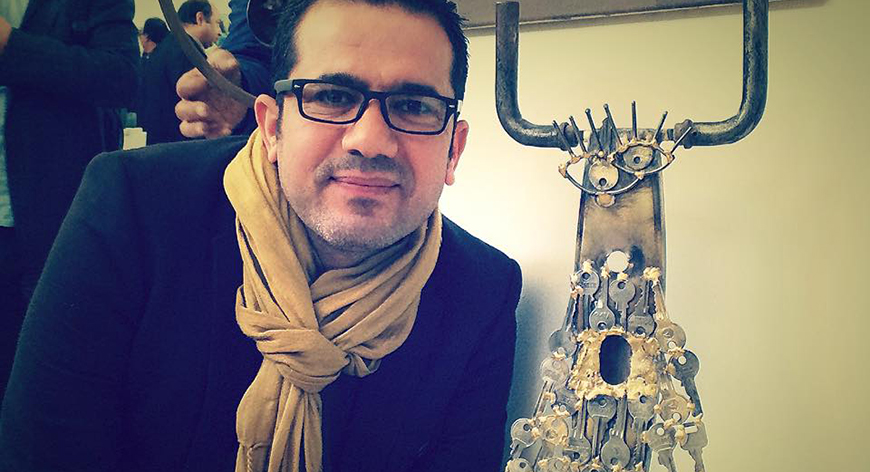 Aqeel Khreef is pictured next to one of his sculptures in this undated photo. (Photo by: Aqeel Khreef)

The artist, who obtained a degree from the Academy of Fine Arts in Baghdad in 2011, uses waste materials to reflect reality and to convey his interpretation of the world to the general public. “Shoes are damaged by walking and they refer to the emergence of IS, which is rooted in the Islamic dispute that we have been carrying for more than 1,000 years,” Khreef said.

Khreef compares his work as an artist to that of a soldier, which was triggered “by the invasion of his home country by foreign terrorists.”

Kais Salman’s resolutely contemporary art pieces have also been inspired by his country — Syria — and the everyday reality torn up by a civil war. In his "Civilized Society," at Ayyam gallery, paintings in the artist's latest exhibition explore the world of Arab politics, often in a satirical way.

His "Anonymous Arab" (2014) painting shows a large man outfitted in a tuxedo lounging on a long beige sofa, a reference to a life of privilege. Another artwork, "Brands" (2014), features a man attending a red-carpet event posing in front of a wall covered with famous fashion-brand logos such as Gucci and Dior, as well as IS — the terror group seemingly becoming an international brand among many others.

All these artists have learned to scrutinize the country’s political and social reality, deconstructing art by using irony. With a lot of creativity, intelligence and humor, they underline with their paintings and sculpture the political and social corruption the Arab world is facing and the depravity and hypocrisy of terror organizations, which are killing innocents in the name of religion, as well as their ability to morph into an international recognized cliche.