Can Turkey mediate Russian-Ukrainian conflict on the Black Sea?

President Erodogan has been on the phone with the Ukrainian, Russian and US presidents and has called for Ukraine and Russia to peacefully resolve their conflict. 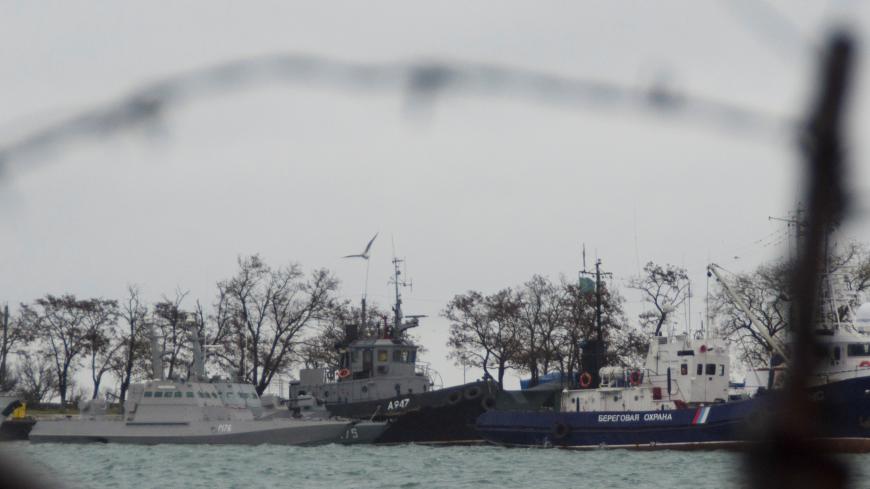 A new wave of tensions between Russia and Ukraine has made headlines this week. On Nov. 25, Russia seized two small Ukrainian armored artillery vessels, a tugboat and some 23 crew members. The incident took place near the Kerch Strait, a narrow artery that connects the Black Sea to the Sea of Azov and runs between the Crimean Peninsula and Russia. Three Ukrainian servicemen were wounded.

Moscow described the incident as a “provocation.” “The fact that it was done under the goodwill and direct order of the [Ukrainian] leadership is undoubtable,” said Russian Foreign Minister Sergey Lavrov. “When the Ukrainian side was planning this provocation, they must have calculated the additional benefits they wanted to derive from this situation expecting the US and Europe to blindly support the instigators, as usual,” Lavrov added. Russian President Vladimir Putin preferred to maintain silence for some time — his first comments were made Nov. 28, three days after the incident. The Russian leader accused Ukrainian President Petro Poroshenko of the provocation. According to Putin, Poroshenko took the step because it could bring him benefits ahead of an election in March.

The Ukrainian side took an opposite view of the situation. Kiev called Russia’s action an “aggression.” The day after the incident the Ukrainian parliament voted to impose martial law for 30 days in the provinces that are most vulnerable to an attack from Moscow. Poroshenko has warned that his country is under threat of a full-scale war with Russia. “We have clear data that this [the attack on Ukrainian navy boats] is only the beginning,” Poroshenko said at a meeting with journalists, according to the Ukrainian news agency UNIAN.

The prospect of a full-scale war between these two former Soviet states scares its neighbors in the Black Sea region. The day after the incident, Turkey, a key power in the region, made a statement calling for a peaceful solution to the conflict.

“We [are following] the developments and the escalating tensions in the Sea of Azov and Kerch Strait. In this context, we are concerned about reports that shots were fired at Ukrainian vessels which caused injury of some personnel. As a littoral state of the Black Sea, we emphasize that freedom of passage at the Kerch Strait should not be hindered. We urge all parties to refrain from steps endangering regional peace and stability, to respect international law and to act in common sense and restraint to avoid increasing the tensions,” Turkey’s Ministry of Foreign Affairs said in a statement.

Turkish President Recep Tayyip Erdogan called on both Russia and Ukraine to resolve their dispute through dialogue, saying Turkey wants the Black Sea — which it also borders — to become a “sea of peace.” Addressing his party members, he said Turkey is interested in maintaining cooperation with both countries.

“At a time when the world is in the claws of serious threats, we would be pleased to see Russia and Ukraine standing together, not against each other,” said Erdogan.

In Turkey, some experts even predict a bigger war in the region than a two-state confrontation. Ibrahim Karagul, a political commentator from Turkey’s pro-government daily Yeni Safak, wrote in his column that the crisis between Russia and Ukraine is not a crisis between the two countries alone. “It is a situation that can lead all the way to the occupation of Ukraine if the world leaves it alone, and this can be sparked suddenly through such small clashes. This is one of the most important fronts of the power struggle between the East and the West. Ukraine is the West's east and the East's west border; it is one of the most important fault lines on earth. Hence, it will be — and already is — one of the acutest fronts of the East-West power showdown,” wrote the Turkish journalist.

However, the crisis between Russia and Ukraine could also bring some benefits for Turkey. Turkish historian Ilyas Kemaloglu believes that the situation opens huge opportunities for Ankara. “Turkey is the only country in the region that has good relations with both Russia and Ukraine, and is also strong and active in the international arena. Ankara has a chance to prove itself in the diplomatic sphere.”

Turkey is one of the few countries that has managed to keep good relations with both Russia and Ukraine after the Crimean crisis and conflict in eastern Ukraine. Ankara did its best not to take sides: Although Turkey doesn’t recognize the annexation of Crimea, at the same time it didn’t join anti-Russian sanctions.

Turkey and Ukraine cooperate closely in defense industry, software transfers, armored car projects, space, and aircraft design. Since 2012 a visa-free regime between the two states has been in force. During a recent official visit of Ukrainian leadership to Turkey, which took place Nov. 3-4, Poroshenko opened the Ukrainian Consulate in Turkey’s resort city of Antalya. He mentioned that more than 1.3 million Ukrainians visit Turkey every year and this number is growing. Turkey supports Crimean Tatars, an ethnic Turkic group speaking a similar language to Turkish. At the meeting with Poroshenko, Erdogan promised to continue to protect the rights of Crimean Tatars.

Turkey’s neutrality and Erdogan’s good relations with both Russian and Ukrainian leaders were used by the Turkish president when the recent escalation of conflict took place. On Nov. 28, he had three phone calls with the Russian, Ukrainian and American leadership to discuss the tensions in the Black Sea. According to the Kremlin’s press service, the sides exchanged opinions on matters of stability and security in the Black Sea Region. Putin and Erdogan have also discussed the situation in Syria, particularly in Idlib. According to Ukrainian media, Erdogan and Poroshenko agreed that the Turkish president would raise the Ukrainian issue at the G-20 summit in Buenos Aires, which will take place from Nov. 30 to Dec. 1. In his call with Trump, Erdogan shared details of his earlier phone calls with the Russian and Ukrainian presidents.