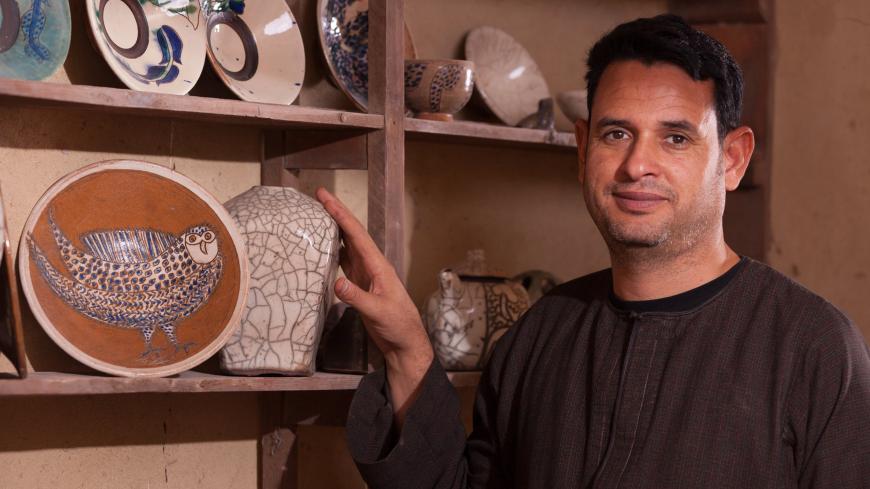 Local and foreign tourists, many with a taste for pottery and other handcrafts, flock every year to Tunis, a small, picturesque village in Egypt’s Faiyum governorate. Today, the village is one of the stopping points of most tours in Egypt, but a mere 50 years ago, it was an untouched hamlet. In 1980s, Swiss potter Evelyn Porret opened her studio there and quickly turned it to a pottery school, the first step toward turning the village into a center for pottery and ceramics.

Porret, who still lives in the village and and continues to run her school, told Al-Monitor that the village could draw a lot more visitors. “Advertising and word of mouth by visitors need to go in parallel. Using the internet and social media for campaigns should be coupled with good feedback from the visitors to the festival.”

“It is also necessary to invite world artists to transform this festival into an international one,” she said. “In fact, the festival’s organizing committee invited world artists and offered them specific slots for their exhibitions. However, the advertisement should reach more pottery, ceramic, and handicraft artists around the world to make this festival competitive.”

The village's products are not limited to pottery — it's just as famous is its caricature museum, opened by artist Muhammad Abla in late 2000s as the first of its kind in Egypt and the region. Most of the cartoons are from Abla’s own collection as he has been gathering the works of the caricaturists from Egypt and abroad for decades.

The village also hosted an initiative called Al-Kalam, which trains artists to use Arabic calligraphy on pottery and ceramics as well as in logos and banners. During the festival on Nov. 1-3, the artists displayed their works and held workshops for children.

The festival also features workshops for whole families on drawing, making ornaments with recycled materials and origami. Family-based activities play an important role in the everyday life of the village, as some of the artisans have settled with their families and they work together with their children. Mohamad Jaafar left the bustling city of Cairo in 2015 with his wife and children to establish Gloria, one of the most famous stores for wood carvings in Egypt. His workshop was decorated to for the visitors to the festival.

Al-Monitor visited the festival and witnessed the preparations by the whole village to welcome the tourists. The walls of the red brick houses were painted with “Welcome to Egypt” in different languages and drawings expressed Egyptian art, customs and fashion.

Mohamad Abdel Fatah, a tourism consultant for several travel agencies, told Al-Monitor that local art festivals have a positive influence on tourism in Egypt. He said that tourists from countries that have strong artisanal traditions — such as Malaysia, Indonesia and Thailand, where woodcarving is strong — will find a lot of interest in this festival, which focuses on so much more than pottery.

Abdel Fatah told Al-Monitor, “The festival helps boost revenues for all of the artisans here. It does not end with the festival — those who did not make it to the festival are still visiting the village right into mid-November.”

He added that the government should help the festival financially and with marketing. For the time being, most of the sponsors are private — Egypt Innovate, Bank of Alexandria, the Egyptian Export Council for Handicrafts and Ghorfat Sinaat al-Hiraf al-Yadawiya (the handicrafts chamber affiliated with the Federation of Egyptian Industries). There is the Alwan company, which supports artistic talent and initiatives, Altwasul, the American University of Cairo's student union and Makouk, which supports education and culture.

Henri the tourist said that the festival, which she discovered by chance, was fantastic. “If the organizers work more on on advertising, e-marketing and social media campaigns, thousands of European tourists could have heard about it and come,” she told Al-Monitor.

David Longueville, another French tourist on the same tour with Henri, told Al-Monitor, “The organization of the festival was high caliber and the residents were very cooperative and sold their products for reasonable prices although what they were offering was great art.”