The Palestinian Museum hosted a workshop for young artists interested in creating the "Palestinian posters" popular in recent decades, lending new life to the compelling images and deep symbolism of the art form. 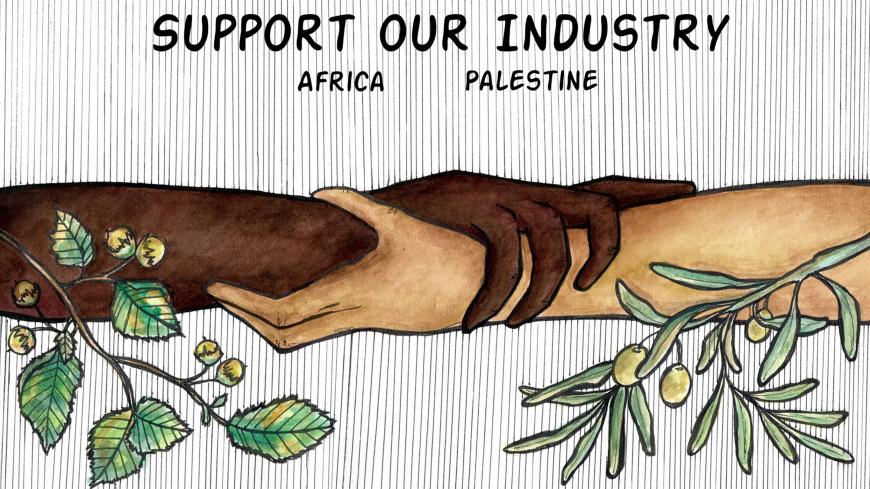 RAMALLAH — Posters have been an important tool of the Palestinian National Movement throughout the 1960s, 70s and 80s. Different Palestinian factions printed and distributed their own posters, which used Palestinian liberation symbols such as raised fists or olive branches and doves to draw attention to their plight and resistance. Palestinian artists' posters, popular at home and abroad, were not only tools to create a narrative about the Palestine liberation, but a means to forge solidarity with other countries, revolutions and people under oppression.

Interest in the so-called “solidarity posters” or “Palestine posters” has waned in the last two decades, but a small exhibition that opened Nov. 13 in the Palestinian Museum aims to revive the tradition through the works of young artists. The posters are the results of a three-day “solidarity revival workshop” in October at the museum, located north of Ramallah in the West Bank.

The young artists created 12 posters that focus on several causes, though solidarity with the peoples of Yemen and Syria are recurrent themes. Haya Kaabneh's two posters express solidarity with Syria, while one of the posters by Haneen Nazzal focuses on Yemen and another on Syrian detainees. A poster by Ahmed Mufeed shows a dagger with the names of Arab capitals inside. “With Yemen until victory” reads its slogan. Visual artist Majd Masri's poster expresses solidarity with exploited African workers and links their plight to that of Palestinian workers, whom she calls "victims of similar persecution.”

Masri tried to create solidarity posters for the first time two years ago but was unhappy with the results. After the workshop instructed by well-known artist Amer Shomali, she was more confident. She told Al-Monitor, “It was important to develop my capacities and widen my experience in creating posters. The workshop showed me how to express my ideas in a [more impactful] way.” Her current poster is simply two hands — one black and another white — gripping each other.

Ahmad Mufeed, a sociology student at Birzeit University and poster aficionado, told Al-Monitor that the workshop helped him decipher the symbolism in posters, especially solidarity ones, and learn how to design his own.

Since the 1960s, Palestinian posters have rallied Palestinians around different causes, such as refugees, the first intifada, the closure of Palestinian universities and attacks by the Israeli forces. The medium was taken up by many other Arab artists, who created hundreds of “Palestine posters” to express solidarity with the Palestinians’ struggle and to support the liberation-oriented Palestinian rhetoric.

Palestinian artists such as Mustafa al-Hallaj, Ismail Shammout, Abdel Rahman al-Muazin, Vladimir Tamari, Tawfik Abdel Al and Adnan Al-Sharif have drawn hundreds, if not thousands, of posters in diverse styles that were popular at home and abroad and later became collector's items or subjects of academic or archival projects. Other artists from the region, such as Izzat from Egypt, Imad Issa from Lebanon or Metin Akin from Turkey, have worked in this genre, expressing their own solidarity with the Palestinian cause or drawing parallels between the Palestinian cause and their own national causes. Some Europeans also became involved, such as Swiss artist Mark Rudin, who produced hundreds of Palestine posters since the late 1960s. His work helped propagate the Palestinian revolution’s rhetoric in the world through stark and forceful imagery.

Media coordinator at the Palestinian Museum Hanin Saleh told Al-Monitor, “The exhibition and the workshop aims to revive the idea of solidarity through posters that entwine the Palestinian cause with other causes.”

Saleh said that reviving this art requires continuous work and efforts from different parties and expressed hope that the exhibition will rekindle interest. She noted that the archival work on the old Palestinian posters show that there was wide solidarity with the Palestinians among artists of different countries throughout the 1960s into the 80s.

He added, “But we, as designers, work now on producing some contemporary posters to revive that solidarity with persecuted people.”

Poster designers must think clearly and focus on similarities, he said, explaining, “Solidarity with African workers is [parallel to] the unjust treatment of Palestinian workers, and solidarity with Syrian refugees stems from the fact that Palestinians have been refugees for 70 years.”

Shomali said social media provided a unique platform for global solidarity. “People have their own ways to show solidarity with each other, like social media platforms, which can become a museum for posters.”