"I will wait for you even if it takes 60 years," a young man from Gaza promised his Syrian fiancee before an Israeli airstrike delayed their long-awaited marriage. 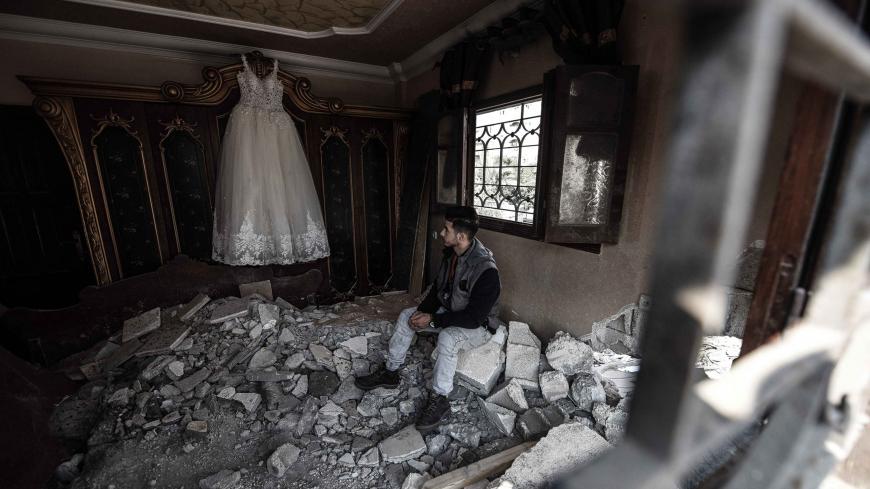 The wedding dress of Fadi al-Ghazali's fiancee hangs on the wall of his heavily damaged apartment in the Sheikh Radwan district of Gaza City, Gaza, in a picture uploaded Nov. 15, 2018. - Facebook/Abed Zagout 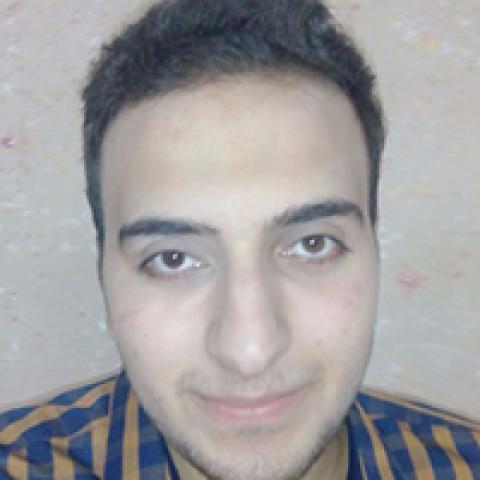 “We thought our love was hopeless, but we continued nonetheless,” Fadi al-Ghazali told Al-Monitor, standing in his heavily damaged apartment in the Sheikh Radwan district of Gaza City. As he and his mother went about clearing the rubble in their apartment from the Nov. 12 Israeli airstrike, on the wall hung a wedding gown, an object that has dominated social media as the symbol of the touching love story of Fadi and Yara, a young woman from Syria.

Fadi had met Yara al-Zoubi on Facebook five years ago, just like many other youngsters of their generation. What set their relationship apart from the millions of other keyboard romances, however, was that they had very little hope of ever meeting in person. One was living under an Israeli blockade that made traveling nearly impossible, and the other spent her life moving from city to city to escape the fighting in Syria's civil war. Yara is originally from Khan Sheikhoun, the city in northwestern Syrian that made headlines in April 2017 as the site of a poison gas attack that killed at least 86 people.

“Our common experience and the harsh circumstances we lived under brought us together,” Fadi said. “I knew she was my soulmate.” They fell in love three years ago and got engaged online.

“A lot of people called our love story hopeless and delusional, because of the blockade on Gaza and the war in Syria, but we persevered, and we believed that our love is worth all the challenges,” Fadi said, noting that several attempts to get Yara to Gaza had failed. “Over the past three years, we moved heaven and earth to get Yara here.”

Fadi’s family had contacted Egyptian authorities on numerous occasions, including at the embassy in Damascus, to try to get Yara a visa to enter Gaza, but their efforts appeared to be in vain. In the meantime, Yara’s parents had advised her to end her engagement to Fadi, believing that the relationship was hopeless. Yara brushed aside their remarks and remained faithful to the young man who assured her that he would wait for her “even if it takes 60 years.”

In late September, the Egyptian Embassy finally contacted Yara to tell her that she had been granted permission to enter Gaza through the Rafah crossing. After three years of trying, Yara finally arrived in Gaza, on Nov. 8. As Fadi describes it, they can't remember what their first conversations were about, because when they first met in person, they both “blacked out” from extreme joy and excitement.

On Yara's first day in Gaza, there was a celebration, with fireworks, a live band and a lavish meal to welcome the Syrian bride-to-be. Her parents had not obtained permission to accompany her, but she had brought with her a gown from Syria to be worn for her wedding in 10 days time.

The next few days were filled with shopping for the wedding. Fadi and Yara were to be married on Nov. 18, the same day Fadi was to turn 22. They would then begin their life together in a new apartment in Sheikh Radwan. The couple had furnished it together before Yara arrived. Fadi sent photos of the rooms to Yara, and the two spent hours online discussing where to put the furniture and what curtains to buy.

Fadi and Yara knew that life would be difficult in Gaza, but they were nevertheless hopeful. They were young, happy and in love. They had a wedding to look forward to and would have a roof over their heads.

The couple's euphoria lasted for four days, until Nov. 12, when Israeli F-16 airstrikes leveled al-Rahma Tower, next to the couple’s apartment. Residents had been warned beforehand to leave the area, so there were no casualties, but Yara and Fadi's newly decorated apartment was severely damaged.

“Just before the shelling, we were having the days of our lives as we were preparing for our wedding,” Fadi said. “We thought that we had left the sad days behind, but the strike turned our happiness into misery. The apartment is in shambles, and we have no choice now but to postpone the wedding.”

The attack also delivered a heavy blow to Yara, especially when she saw her wedding gown in the middle of the destruction. “Yara was devastated and became severely depressed after the Israeli strike,” Fadi explained. “She said that wars, pain and destruction will follow her wherever she goes. I stood shocked and helpless.”

As the couple's story began to spread around Gaza, offers of assistance began pouring in from fellow residents and even from abroad. Gazan businessmen, philanthropists, neighbors, and people who read about them on social media rushed to help, offering small and large sums of money so they could buy new furniture and paint the walls of their apartment. One businessman generously offered to shoulder their wedding costs, down to hiring a good DJ and buying flowers.

“The same way our love endured countless hardships, I have no doubt that it’ll endure this tragedy as well,” Fadi remarked. “Our love has proved to be resilient and powerful beyond what anyone could have imagined.”