Palestine's oldest olive tree symbolizes both the country's resilience and its culture. 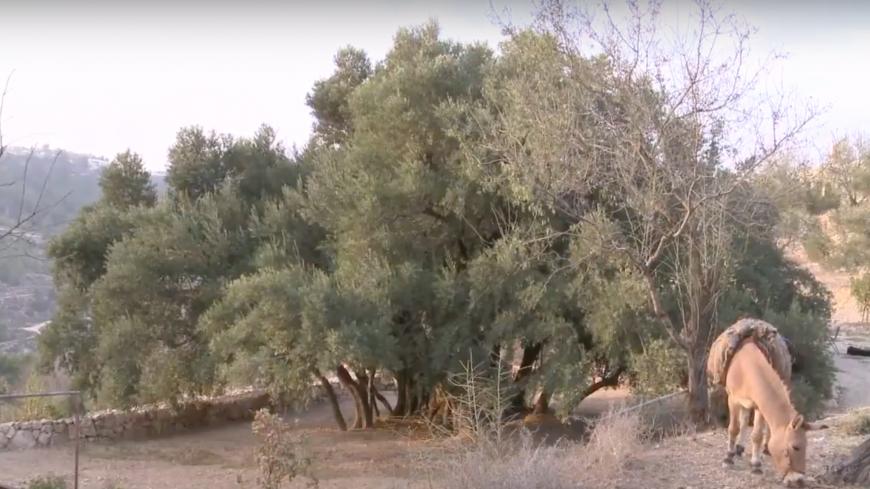 RAMALLAH, West Bank — Stories about al-Badawi olive tree, the oldest olive tree in Palestine, emerge with every olive season, as people debate its age and how long it can live.

The tree is located in the village of al-Walaja, 5 kilometers (3 miles) west of Bethlehem, and extends over roughly 250 square meters (2.7 square feet), is 12 meters (39 feet) high and has a trunk that measures 25 meters (82 feet) in diameter.

Despite the lack of accurate scientific information about its age, both the owner and guardian of the tree and the Palestinian Ministry of Agriculture estimate that it is 4,000-5,000 years old. News articles and academic papers often describe it as the oldest olive tree in Palestine and one of the oldest in the world.

In 2009, the Ministry of Agriculture appointed Salah Abu Ali, who is the owner of the land where the tree is located, as the guardian of the tree. Abu Ali calls it the “Mother of all Olive Trees” and compares it to “a queen surrounded by soldiers,” because it is surrounded by smaller olive trees.

Abu Ali told Al-Monitor that the tree was named after Ahmad al-Badawi, a 13th-century Sufi imam who is said to have spent many hours sitting in the shade of the tree. Some refer to it as “the tree of our master Ahmad al-Badawi.”

Every morning, Abu Ali, who lives in al-Walaja village, makes his way to the farm where the tree is located, about 500 meters (0.3 mile) from his house.

He admits that he has grown fond of the tree over the last nine years. “It has become part of my life. I am proud to guard and fertilize it and clean its soil. I welcome tourists and students who come to visit it and offer them coffee,” he said. “The tree has become one of the most prominent landmarks in the city of Bethlehem and Palestine."

Abu Ali said that the monthly salary of 1,500 Israeli shekels ($406) he receives is low, but that he is proud of guarding this national treasure and he would not quit the job. “Some years this tree has produced 600 kilograms [1,323 pounds] of olive oil. This year, however, it only produced 250 kilograms [551 pounds, due to lack of rain],” he said.

According to Abu Ali, the tree has been part of many social rites over the years. Locals say that Sufis performed their rituals in its shade. Before the founding of the State of Israel in 1948, it was also a place where religious vows were performed, babies were circumcised and food distributed to the poor.

There is a superstition whereby locals collect seven olive leaves of the tree believing that these leaves would ward off envy. Oil extracted from the leaves is also said to cure diseases. This is why the residents of the village would help pick olives in the harvest season. However, many of these practices have disappeared over time. This harvest season, which kicked off Oct. 12, the olive pickings relied solely on Abu Ali and a few others who helped him out.

Abu Ali said the tree has become a popular tourist attraction as the residents of Bethlehem and the West Bank visit it and spend time in its shade. Foreign tourists also visit the tree and some organize spring festivals around it.

According to researcher and novelist Osama al-Issa, al-Badawi olive tree faces several challenges. The most crucial one is the drought, which caused the nearby Ein al-Juweizah spring to dry up. Spring rains provide water, but the artesian wells that the Israeli authorities have dug in the area cause the groundwater to flow into them.

Issa told Al-Monitor, “The Ein al-Juweizah spring used to be the main water source for the tree. The spring is connected to a nearby tunnel discovered in the 19th century. It is one of the largest water tunnels in rural Palestine; it is 220 meters long and is estimated to be 3,000 years old. It used to provide water to the area, but this is no longer the case.”

“Al-Badawi tree — of the Nabali Baladi variety — is one of the oldest olive trees in Palestine, but we do not have accurate information about its age. Although the tree is between 4,000 and 5,000 years old, no official scientific research has been conducted,” Obaid said.

He added, “We are trying to provide the necessary funding to implement the project and determine the real age of the tree, and this research will take a long time. The olive tree is alive and its cells are renewable, so the technique needed to determine its age would be different than that used to determine the age of fossils."

The Palestinian Ministry of Culture, in cooperation with the Ministry of Agriculture, has been preparing a file on al-Badawi olive tree for submission to UNESCO, to have it included on the World Heritage List.

Amani al-Junaidi, the director of the National Heritage Register at the Ministry of Culture, told Al-Monitor that the file they are working on focuses on the social, cultural, economic, technical and popular customs— that is, the intangible heritage — surrounding the tree. It will also include the olive tree culture of Palestine, in agriculture, in the arts and in popular culture, such as songs and proverbs.