The online journal Haberturk provides more details on recordings inside the Saudi Consulate when Jamal Khashoggi was killed, including quotes from one the man who put on the journalist's clothes in hopes of creating a diversion. 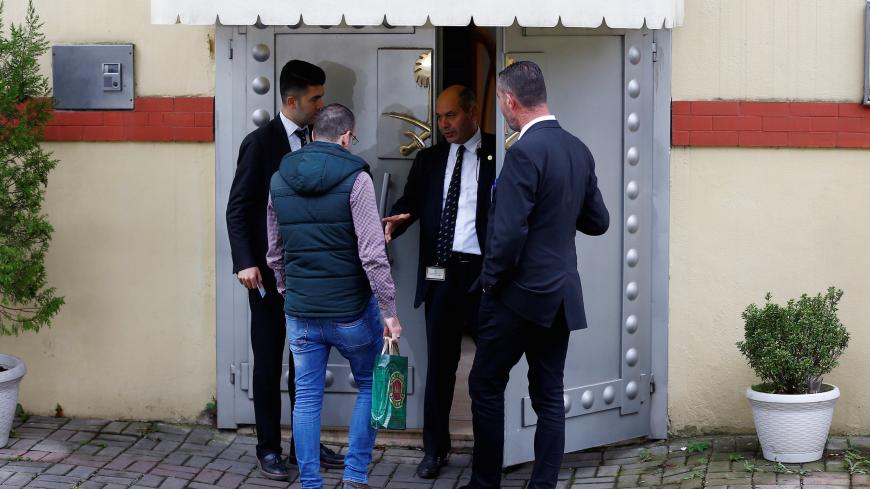 A man enters to Saudi Arabia's consulate as security officers stand at the entrance in Istanbul, Turkey Oct. 31, 2018. - REUTERS/Osman Orsal

ANKARA, Turkey — Shortly after dissident Jamal Khashoggi was murdered in the Saudi Consulate, a man of similar appearance put on his clothes. His aim was to deceive the world into thinking the Washington Post contributor had left the consulate unharmed.

As he headed to the consulate door, Mustafa al-Mudaini said to his accomplices, “It’s spooky to be wearing the clothes of the man we killed 20 minutes ago.”

The remark is one of many details of Khashoggi’s last moments revealed by a newspaper columnist who was given access to Turkish intelligence’s recordings.

Cetiner Cetin of the online journal Haberturk provides the most extensive account of the contents of the recordings, which have been shared with Western governments but not with the public. His column appeared a day before President Donald Trump was due to receive an interdepartmental report on Khashoggi’s killing.

Turkey undoubtedly opened the files to Cetin in a bid to increase the pressure on Saudi Arabia to disclose who ordered the killing and what the killers did with Khashoggi’s body.

Last week Saudi Arabia charged 11 people with the killing but said the order to kill was a spur of the moment decision made by the leader of the team that went to Istanbul to bring Khashoggi back to the kingdom. Ankara does not accept that theory.

Ankara argues the team came to Turkey in order to kill Khashoggi, and for that reason team members carried equipment used to dismember his body, such as a bone saw, and they included a forensic scientist.

Cetin says the recordings do not reveal the moment of Khashoggi’s death nor the dismemberment of his body. The cutting of the body apparently happened in the upper floor of the consulate where Turkish intelligence did not have a bug.

But Cetin says that in their inspection of the consulate, Turkish prosecutors found traces of human tissue on the baseboards of an upper floor room as well as the fingerprints of the forensic scientist on electrical sockets in the wall.

One is left to conjecture that the scientist touched the socket as he connected his bone saw to the power supply.

For Saudi Arabia’s position, the most damning element in Cetin’s column is his saying that the leader of the team, Maher Abdulaziz Mutreb, made four calls to Saud al-Qahtani during the incident.

Mutreb is a member of the security squad of Crown Prince Mohammed bin Salman, and Qahtani was also a member until he was fired in the fallout over Khashoggi’s killing, a chief aide to the prince. Qahtani tweeted last year, “I am an employee and a faithful executor of the orders of my lord the king and my lord the crown prince.”

Mutreb’s voice was apparently identified by matching it with his comments to Turkish immigration officials as he passed through the Istanbul airport. Cetin does not reveal how Turkey concluded he was calling Qahtani, but it is possible the national telecommunications company Turkcell obtains the destination of the calls for which it provides a roaming facility so it can charge for them.

The last the world saw of Khashoggi was when he walked confidently into the consulate, exchanging a greeting with a man standing at the gate.

The recordings show his demeanour changed seconds later. As soon as he entered, a member of the team grabbed him and we hear Khashoggi saying, “Let go of my arm! What do you think you are doing?”

An argument breaks out and Khashoggi is taken into the consulate’s administrative offices, where a second recording device takes over.

Mutreb says to Khashoggi, “You traitor. You will pay for it.” One also hears the voice of the consul general himself, Mohammad al-Otaibi. Cetin writes the altercation degenerated into a brawl and then into something worse.

“According to the information I was given, the beating that Khashoggi was subjected to in (the administrative offices) was so intense as to constitute torture.”

Khashoggi is taken upstairs. After an hour and 50 minutes of silence, the recording bugs catch three members of the team as they come down the staircase. One orders the consulate’s reception area to close down for the day. Another man busies himself with deleting the closed-circuit camera footage. (Turkish prosecutors found that none of the 19 closed-circuit cameras in the consulate had any images of Khashoggi’s visit.)

And the third man, Mudaini, makes his comment about wearing Khashoggi’s clothes and complains that Khashoggi’s shoes are too tight. He receives permission to wear his own trainers.

“After that,” Cetin writes, “they all agreed he looked like Khashoggi, nobody would notice the shoes, and he obeys the team’s instructions: Walk for four blocks, get into a taxi, go to Sultanahmet, get rid of the clothes and meet them at the consul’s residence.”

Turks regard the Khashoggi murder as a Saudi slap in the face. There is the suspicion the Saudis did not dare kill him in America, his home since he went into exile last year, because the FBI would have found out and Washington would have been furious. The Saudis seemed to have believed they could get away with it in Turkey.

But Turkey was not fooled by Mudaini posing as Khashoggi. Long before Saudi Arabia admitted to the ploy, Turkish newspapers were publishing photographs comparing Mudaini's sports shoes to Khashoggi’s black leathers. Another difference was that Mudaini has hair on his head whereas Khashoggi was almost completely bald.

While Turkey has earned the world’s respect for cracking the cover-up of Khashoggi’s killing, it was censured on Tuesday for its prolonged detention of its leading Kurdish politician, Selahattin Demirtas.

The European Court of Human Rights found that Turkey had kept Demirtas in detention without trial for an inexcusably long period.

Prosecutors detained Demirtas in November 2016 and quickly charged him with multiple counts of terrorism. But it was only in September of this year, after several acquittals, that a court convicted him of promoting terrorism in a speech delivered in 2013. He was sentenced to four years in jail.

Demirtas campaigned from his cell for the "no vote" in the constitutional referendum of April 2017, and for the presidency in the June 2018 elections — in which he finished a surprising third with 8.4% of the vote.

The court ruled that Turkey should “take all necessary measures to put an end to the applicant’s pre-trial detention” — a confusing form of words as Demirtas is now a convicted prisoner.

Demirtas’ lawyer Mahsuni Karaman told Reuters he had already applied to a court in Ankara for his client’s immediate release.

President Recep Tayyip Erdogan dismissed the Strasbourg ruling as being “not binding.”

“Whenever they have a decision about the organization,” he said, referring to Kurdistan Workers Party (PKK) insurgents, “it is against us. We have many things to do in response to this. We will take counter measures.”

Erdogan has often accused Demirtas’ party, the Peoples' Democratic Party (HDP), of being part of the PKK — an association the HDP strongly rejects.

The head of the HDP’s foreign department, Nazmi Gur, told al-Monitor that Erdogan’s dismissal was “completely unacceptable” and a challenge to the court’s authority.

“Since 1992 Turkey has recognized the European Court of Human Rights,” said Gur, a former legislator. “If you recognize the court, you cannot say ‘I don’t recognize its decisions.'”

He predicted the party would ask the Council of Europe’s executive to take action against Erdogan. The body could impose sanctions on Turkey, Gur said.

Demirtas issued a statement from prison saying the European Court of Human Rights had recognized him as “a political hostage.”

“The tutelage of politics over the judiciary is a great threat to both democracy and the future of the nation,” he said.