Changes over the last few months in Israel, the United States and the Palestinian Authority make it all the more realistic for the Trump administration to submit its Palestinian-Israeli peace plan soon. 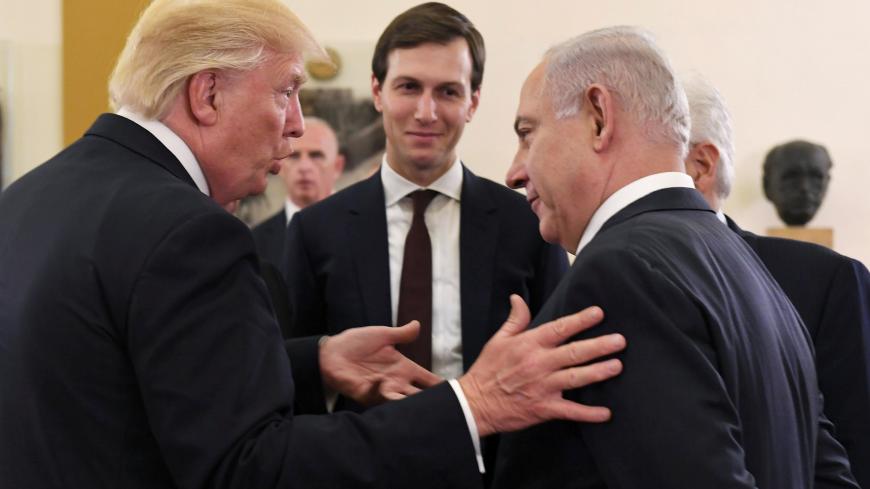 Israel's Prime Minister Benjamin Netanyahu and US President Donald Trump chat as White House senior adviser Jared Kushner is seen in between them, during their meeting at the King David hotel in Jerusalem May 22, 2017. - Kobi Gideon/Courtesy of Government Press Office/Handout via Reuters

At a press conference Sept. 26 on the margins of the meeting of the UN General Assembly, President Donald Trump was asked a question that he may not have been prepared for. His response included the claim that in two, three or maybe four months, he would present his administration’s plan for peace between Israel and the Palestinians. It was the first time he ever referred to his peace plan in terms of time. On the other hand, the world has long gotten used to hearing the leader of the free world say things that he doesn’t usually mean, so no one will be standing there with a stopwatch, counting the days until Jan. 26, which would mark exactly four months since his off-the-cuff remark. At the same time, it is also certainly possible that this statement was more serious than his other remarks, largely because of three changes that occurred since this past September.

The first took place in Israel. Conventional wisdom just two months ago was that once the Knesset’s summer recess ended, Prime Minister Benjamin Netanyahu would bring a proposal before the Knesset to hold early elections in the spring of 2019, just a few months before they are officially scheduled. Pundits believed that it would be in his interest to hold early elections before his coalition falls apart, and that he would take advantage of one contentious issue or another (such as the conscription of ultra-Orthodox yeshiva students, which has been on the government’s agenda for over 70 years) to announce that he prefers to hold early elections than to surrender to the ultra-Orthodox. This would be a particularly easy issue for him since the vast majority of Israelis are uncomfortable with the idea that young ultra-Orthodox men are exempted from three years of military service, while Israelis who are not ultra-Orthodox are required to serve.

Since then, the Knesset’s winter session has begun, and the ultra-Orthodox seem likely to accept the revised Conscription bill (even if they will vote against it for their own reasons). They do not want to give Netanyahu an excuse to break apart a government that is otherwise so convenient for them because of its right-wing, ultra-Orthodox composition. At the same time, it is also possible that Netanyahu himself has gone back on his desire to hold early elections. The polls seem to favor him, and Attorney General Avichai Mandelblit is in no hurry to indict him for bribery. In other words, the cases being built up against him will only be ready in 2020, when he is — he hopes — starting his fifth term.

The second change took place in the United States. Trump may use his Orwellian language to describe every defeat as a victory. Still, the fact is that he lost the Republican majority in the House of Representatives. It doesn’t matter that other presidents lost the House two years after they were elected or in some cases lost both the House and the Senate. It will now be very difficult for him to pass laws affecting internal affairs, so it is only natural that he will find himself focused more and more on foreign affairs instead. This will happen regardless of his very limited understanding of international affairs and his even more limited enthusiasm for these issues. Trump needs victories over the next two years to prove that he is a capable president before the 2020 election, and he feels that he and his staff — led by his son-in-law, Jared Kushner — can succeed where all their predecessors failed. In other words, they can resolve the Palestinian-Israeli conflict.

Trump could not allow himself to get involved in this kind of adventurism before the midterm elections. After the elections, it is much easier for him, particularly if the plan itself has been ready for a while. Trump would like to toss a new “Oslo Accord” onto the world stage. He believes that this is what will distract people from the growing tide of violence in the United States and the expanding deficit, which threatens the economic future of the country in the mid-term and the stock market in the short term.

It is in Trump’s interest to release his diplomatic plan. He hoped that he could rely on Saudi Crown Prince Mohammed bin Salman and present a plan tailor-made to Netanyahu’s specifications without any commitment to a two-state solution and a Palestinian capital in East Jerusalem. Then he lost Prince Mohammed as an esteemed regional partner over the Khashoggi affair. Upon realizing that there is nothing to read into Arab leaders’ denigrating tone regarding the Palestinian issue because, in the end, they listen to the masses sympathetic to the Palestinians, Trump realizes that the plan that he offers will have to resemble previous plans but with greater emphasis on the economic angle. Such a plan is more likely to be accepted by the PLO and by Palestinian President Mahmoud Abbas.

In fact, the third and most significant change took place on the Palestinian side. A senior member of the PLO told Al-Monitor this week, right after the US midterm elections, that they expect the Trump plan to be submitted. He said that despite all of Abbas’ warnings after the relocation of the US Embassy to East Jerusalem this past May that he would not even be willing to look at Trump’s proposal, the Palestinian leadership realizes that as soon as the plan is submitted — and particularly if it includes the principle of a two-state solution and a willingness to recognize a Palestinian capital in East Jerusalem — Abbas will announce that the Palestinians will not be satisfied with anything less than full sovereignty within borders based on the lines that separated Israel and Jordan up to the 1967 Six-Day War, mutual agreement to a solution for the refugee problem and a capital in al-Quds (Jerusalem). Nevertheless, Abbas will not avoid engaging in negotiations based on the American plan and won’t condition talks on his own red lines. After the recognition of Jerusalem by Trump, Abbas hurried to declare that he won’t resume ties with the American administration unless it withdraws from moving the embassy to Jerusalem. Now he knows that his condition is not feasible.

If there is, in fact, Palestinian willingness to take part in the emerging peace process, and if Netanyahu feels that his situation makes it impossible for him to turn Trump down, there will still be very limited time to act. Israel’s next election, if held on time, is scheduled for Nov. 5, 2019. It is reasonable to assume that Netanyahu will want to avoid diplomatic negotiations continuing right up to the very last moment of an election campaign.

Over the course of such negotiations, Netanyahu will undoubtedly come under sharp criticism from HaBayit HaYehudi — but not from only them. It will therefore be incumbent on him to select one of two options some reasonable time before the election. He will either have to announce that he tried to reach a historic solution to the conflict but was disappointed anew by the Palestinians’ failure to “rise” to Israel’s demands, or the less likely option of reaching a statement of principles in the spirit of the American proposal and to take that to the public in a new election.

Regardless of what happens, the changes that have taken place since Trump’s off-the-cuff “two, three or maybe four months” remark make the idea that such a peace plan will actually be submitted all the more realistic. If it is, Israel and the Palestinians will be obliged to face the kind of dilemmas that both parties wished they would not have to confront.