Israel's ultra-Orthodox draft crisis seems likely to be resolved, leaving the governing coalition intact until the next scheduled elections. 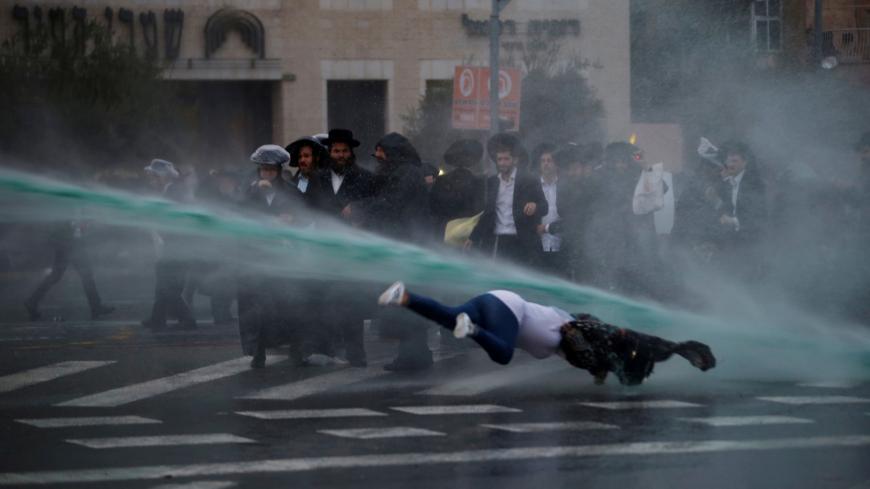 A bystander falls as Israeli police spray water during a demonstration by ultra-Orthodox Jews against the detention of members of their community who failed to report to a military recruiting office, Jerusalem, Nov. 26, 2017. - REUTERS/Ronen Zvulun

If we ignore for a moment the sword of Damocles hanging over him in the form of criminal investigations and potential indictments, it would seem that Prime Minister Benjamin Netanyahu has succeeded in dismantling the land mines threatening his coalition, increasing the likelihood that the next election will take place in November 2019 as originally scheduled.

One of the main threats that Netanyahu neutralized was the conscription law, intended to manage the enlistment of yeshiva students to the Israel Defense Forces (IDF). For many years, ultra-Orthodox leaders resisted the drafting of their youths, considering the topic a red line for the coalition.

While politicians involved in the issue are being very cautious, with most of them refusing to even talk about it on the record, there is a feeling of optimism among those who will. Deputy Defense Minister Eli Ben Dahan (HaBayit HaYehudi) told Al-Monitor that he is confident that the defense establishment will submit legislation that will be approved by all parties and passed by the Knesset in the next few weeks.

Ultra-Orthodox Shas leader Aryeh Deri told Al-Monitor that elections are entirely unnecessary right now. Given that a basic outline for the conscription law has been reached, Deri believes that there will be no elections in the near future and that Netanyahu will finish his term.

Until just two months ago, the conscription law was the kind of obstacle that could have taken down the government. The crisis began to gain momentum in September 2017, when the Supreme Court overturned an amendment to the law, which had just been approved by the current Knesset. That amendment revoked all punitive measures against ultra-Orthodox yeshivas that fail to meet the recruitment targets promoted by Yesh Atid leader Yair Lapid and approved by the previous Knesset in 2014.

Young ultra-Orthodox Israelis can postpone their enlistment as part of an arrangement with the state and do not have to serve at all if they continue to study in a yeshiva. Amid growing public criticism of this unequal treatment, there have been two main attempts to legislate a change. The resulting conscription law passed by the previous Knesset set quotas for how many ultra-Orthodox must serve. The law was amended under the current government as part of the coalition agreement with the ultra-Orthodox parties, but the Supreme Court overturned it. The justices gave the government one year to fix the amendment to ensure that it accords with the country’s Basic Law. Health Minister Yaakov Litzman was unwilling to wait and sparked a coalition crisis over it three months ago.

The crisis was resolved temporarily with an unequivocal commitment to pass an amended law in the Knesset’s 2018 summer session with the agreement of all coalition partners, including the ultra-Orthodox parties. A committee put together by the Defense Ministry has been meeting since October. Over the past few weeks, it has also held private meetings with several party leaders, presenting them the new law proposal. A May 28 article in Yisrael Hayom claimed that the party leaders saw the basic principles of the outline and found them acceptable. A small group of ministers will now work together to formulate a final law draft.

A senior government official confirmed to Al-Monitor on condition of anonymity that discussions about the issue are underway, a basic understanding has been reached and the overall direction is positive. At the same time, he warned that there is no final agreement, saying, “It’s not over until it is finally passed by the Knesset.” Details of the new outline include enlistment targets for young ultra-Orthodox men, but without any sanctions against them or the yeshivas. These targets would be set by the army in accordance with its needs and its ability to meet the conditions required by ultra-Orthodox soldiers such as special kosher food and set times for prayer.

A military source explained to Al-Monitor, also on condition of anonymity, that the law is intended to integrate young ultra-Orthodox men in the IDF and then in Israeli society and the economy without coercion. He said that previous attempts to do so saw the rate of enlistment drop in those years during which the conscription law included sanctions. The source added that as part of the proposed outline, the IDF will significantly expand the enlistment possibilities for young ultra-Orthodox men, including the creation of new units adapted to their particular lifestyle.

For instance, the IDF is planning to create ultra-Orthodox units to secure military facilities, allowing the IDF to relieve other combat units of this responsibility and free them up for other assignments. At the same time, existing tracks for ultra-Orthodox soldiers in combat units will be expanded. The IDF is also prepared to create special military service tracks for ultra-Orthodox soldiers who enlist at a later age, when most of them are already married. This population would enlist for a shorter service term. Their service will include professional training for jobs needed by the army, and the soldiers will receive additional benefits such as economic assistance.

To pass the Supreme Court hurdle, the IDF will declare that the conscription targets are based on its own needs and not determined by the political leadership. The military source said that he has no doubt that the number of ultra-Orthodox recruits will continue to grow each year, not least because of the economic benefits that come with military service, including the opportunity to acquire a profession and enter the workforce.

One senior ultra-Orthodox politician told Al-Monitor that it is perfectly obvious that it is not in the interest of the ultra-Orthodox parties to bring down the government just to prevent the conscription law from passing, if only because of the political gains that Lapid would stand to make from the return of inequitable military service to the public agenda. According to the politician, if the government does fall over this issue, Yesh Atid will get many more seats in the next election, but if the topic drops off the agenda, Lapid will weaken.

According to the most recent polls, Lapid will be Netanyahu's main rival in the next election. He is competing for the votes of centrists, who lean to the right on security and diplomatic issues but do not like the blatant partnership between Netanyahu and the ultra-Orthodox. A poll conducted soon after the Israel air force launched attacks in Syria earlier this month, when security issues were at the top of the agenda, gave Lapid just 18 seats, compared to 42 for the Likud. In January, when the headlines focused on the criminal investigations and the crisis surrounding proposed legislation to close supermarkets on the Sabbath (a move seen as surrendering to the ultra-Orthodox), the polls gave Lapid 27 seats, compared to just 22 for the Likud.

But the standing of the ultra-Orthodox parties hardly changed in these polls. If the ultra-Orthodox politician who spoke with Al-Monitor is right and the leaders of these parties do not want to bring down the government and strengthen Lapid, it is reasonable to assume that Netanyahu will get through this crisis, too.