Iranians have cautiously welcomed reports that France and Germany are establishing a channel for trade with Iran and help salvage the nuclear deal. 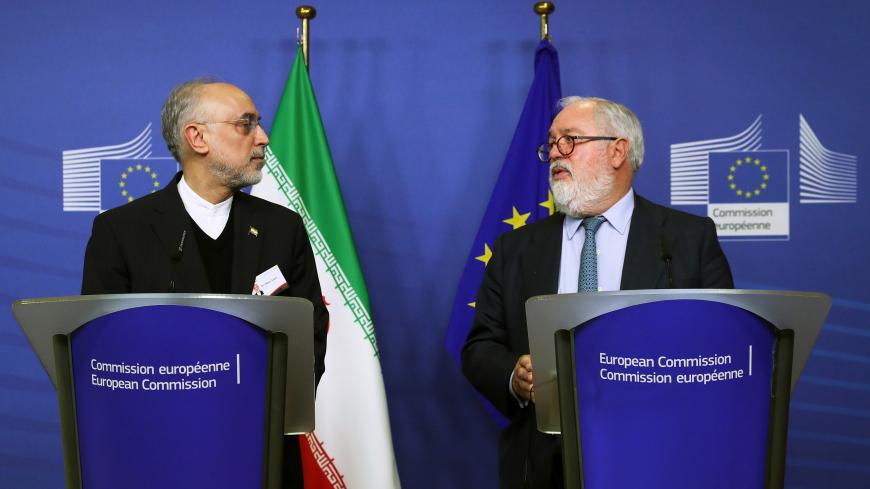 The Wall Street Journal reported Nov. 26 that Paris and Berlin are about to create a payments channel to maintain trade with Tehran in defiance of US sanctions. The news has been largely received in Iran as a signal that the Joint Comprehensive Plan of Action (JCPOA) will yet be salvaged. The channel, known as a Special Purpose Vehicle, has been under discussion for months by Iranian and European negotiators.

Printing a picture of French President Emmanuel Macron and German Chancellor Angela Merkel hand-in-hand on its front page, Reformist newspaper Aftab praised their two governments’ "step forward" in bypassing US sanctions on Iran. "The French and Germans are rolling up their sleeves to implement the mechanism," read another editorial in Iran, a paper echoing the official agenda of President Hassan Rouhani's government. "Once implemented, the mechanism will prevent Iranian financial isolation," the article stated.

Since the US pullout from the JCPOA on May 8, Iranians have been looking to Europeans to rescue the pact with practical steps beyond political support. In an interview a day after the report, Ali Akbar Salehi, the head of Iran's Atomic Energy Organization, expressed Tehran's frustration with delays in European action and made it clear to Europe that failure was not an option. He said he would convey to the EU Foreign Policy Chief Federica Mogherini ahead of a meeting between the two in Brussels that Iranians' patience is running out. Salehi also renewed a warning that Tehran would resume its 20% level uranium enrichment program if it finds the deal is no longer working.

While largely viewed as positive, the plan left many with unanswered questions. This "first step from word to action," according to pro-reform daily Ebtekar, sill faces hurdles that include guarantees to immunize European firms from US punishment.

Hamid Reza Asefi, a senior former Iranian diplomat and ambassador, threw pessimism at the plan, noting that it's simplistic to think that a financial mechanism with Europeans is workable. "Europe is determined to keep the JCPOA but without paying any price," he said. "From a realistic point of view, if they have to pick one between Iran and the United States, Europeans will definitely go for the latter."

In the wake of the report, Iran's national currency, which has taken several sharp drops in the past few months, mainly due to US sanctions, regained value against the greenback on Nov. 28. The governor of the country's Central Bank heralded better days for the rial, but did not elaborate on whether the intensified Iran-Europe diplomacy had helped the troubled currency get back on its feet.

Iran's hard-liners have been warning that Europe's ties with the United States are too important to be sacrificed for Iran. Although they have largely ignored the Wall Street Journal report, the message has always been clear: "Mr. foreign minister! Write this note down on a piece of paper: the lesson from the US," cautioned Javan, which represents Iran's Islamic Revolutionary Guard Corps. "Keep it before your eyes while sitting down with Europeans, so that the same [experience] does not have to be repeated."