While Iran is unlikely to have been happy about Israeli Prime Minister Benjamin Netanyahu’s visit to Oman, it has tried to remain pragmatic in order to prevent tensions with a longstanding Arab friend. 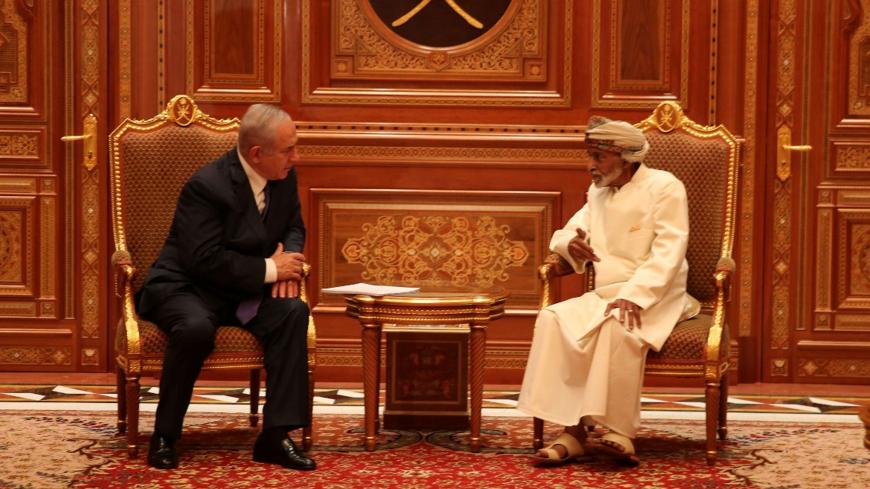 Oct. 26 was marked by a rare development in the Middle East: Israeli Prime Minister Benjamin Netanyahu visited Oman, the first official trip by an Israeli leader to the Persian Gulf nation since 1996, where he was welcomed by Sultan Qaboos bin Said.

News of Netanyahu’s trip made waves in Iranian media. Regardless of Iran’s turbulent relations with other Arab states, Oman has for years maintained warm and friendly ties with the Islamic Republic. As part of this posture, Muscat has remained neutral toward the political rivalry between Iran and Saudi Arabia. Thus, at a time when Israel and Saudi Arabia are more than ever before moving closer to each other, Oman’s welcoming of Netanyahu could have many different implications for Iran.

Despite the reactions in local media, Iranian officials have reacted cautiously to the visit. On Oct. 27, Foreign Ministry spokesman Bahram Ghasemi said, "Muslim states should not allow Tel Aviv to create further trouble for the region under pressures from the United States.”

Iran’s foreign minister adopted a softer tone. In an interview Nov. 13 with the London-based news network Al-Araby Al-Jadeed, Mohammad Javad Zarif said, “Israel wants to create a rift between Iran and Arab countries. Arab governments should be aware of this. But we will not meddle in Oman’s foreign policy, just as Russia and Turkey also have relations with Israel [without meddling from Iran].”

But the analysis coming out of Tehran was very different. While most politicians believed that Netanyahu’s visit to Muscat was aimed at influencing the Israeli-Palestinian peace talks, others said Iran was also on the agenda.

Former Iranian Ambassador to Jordan Nosratollah Tajik told Al-Monitor, “This trip has different dimensions for different players. On the one hand, unlike the era of [former US President] Barack Obama, the White House has not been paying attention to Oman since Donald Trump took office and Muscat does not mind being more in focus.” Tajik noted that Netanyahu’s aim with his visit was diverse. “The official recognition of Israel by an Arab capital is surely a victory for Netanyahu. This is not to mention that he is aware that Oman is one of the few Arab countries that has close relations with Iran and will surely try to influence this [dimension to Omani foreign policy],” he said.

But even assuming that this is indeed Israel’s aim, how would it seek to influence matters related to Iran? In this vein, most Iranian experts think Netanyahu’s trip was aimed at pressuring Iran while discouraging one of Tehran’s Arab allies from maintaining normal ties.

Qasem Mohebali, former director-general of political affairs for the Middle East at Iran's Foreign Ministry, thinks otherwise. Appearing to dismiss the extent to which the Saudi-Israeli warming of ties is genuine, he told Al-Monitor, “It is possible that Israel has sent a positive message to Iran through Oman, because the Israelis in their foreign policy act in accordance with a policy of ‘the enemy of my enemy is my friend.’ Both Iran and Saudi Arabia as well as other Arab countries are Israel’s enemies, and Tel Aviv in accordance with this situation is trying to get close to at least one of them.”

According to Mohebali, such a supposed Israeli policy is nothing new. “During the [1980-88] war between Iran and Iraq and the McFarlane situation a similar story was seen. With any advance Iraq made, Israel moved closer to Iran. And when Iran succeeded [on the battlefield], it helped Iraq avoid defeat.”

A high-ranking official at Iran’s Foreign Ministry who spoke on condition of anonymity refrained from confirming or denying this line of analysis, telling Al-Monitor, “We were not surprised by what happened in Muscat. It is natural for any country to decide what players it should have relations with based on its national interests. This is not to mention that in the past decades, Oman has shown its commitment to maintaining close ties with Tehran and will not move toward destroying this.”

The rarity of Netanyahu’s trip to Muscat along with Oman’s historic role in issues to do with Iran have prompted many analysts to look for a link between the visit and Iran. At the same time, some Iranians believe the visit should be viewed within the framework of domestic Israeli politics, especially since Netanyahu visited Oman shortly after Palestinian President Mahmoud Abbas embarked on a similar trip.

Whatever the aim of the visit, it is likely that Iran was at the very least mentioned in the conversation between Netanyahu and Sultan Qaboos. In such a situation, how is Tehran likely to react toward an old friend?

The senior source at Iran’s Foreign Ministry said, “We have experienced similar situations before and among non-Arab neighboring countries. For example, Azerbaijan has close ties with Israel — although from our point of view, no key or new development emerged [from the dialogue] between Israel and Oman, not to mention that for us, [the visit] was not unpredictable. Therefore, we have no intention of changing our relations with Oman.”

But where does this pragmatic Iranian approach — and especially in the Foreign Ministry — stem from, and how can Iran reduce the Israeli pressures on it?

Iranian journalist Kamran Karami told Al-Monitor, “The reality is that we are witnessing a key development in relations between Israel and neighboring Arab countries. It seems that full relations have been established between Israel and Arab countries, and the only thing left is the official announcement of these ties and the opening of embassies.”

Karami, who is an Arab affairs expert, added, “What Iran can do in the current situation is to refrain from hasty measures regarding Arab countries, and especially Oman. We must accept the developments in the Middle East while at the same time very intelligently remind Arab countries about their failed experiences and negotiations with Israel.”

Iranian officials may not have been happy with Netanyahu visiting the capital of a friendly country in the Persian Gulf. However, they have tried to address the matter in a pragmatic way in order to prevent tensions with Oman, with which they have enjoyed close ties for decades. As such, will the Israeli-Omani engagement be limited to the Israeli-Palestinian issue? Or will there be a change in Oman’s policy toward Iran? Only time will tell.