Intel: How Turkey sanctions relief risks leaving remaining US prisoners out to dry 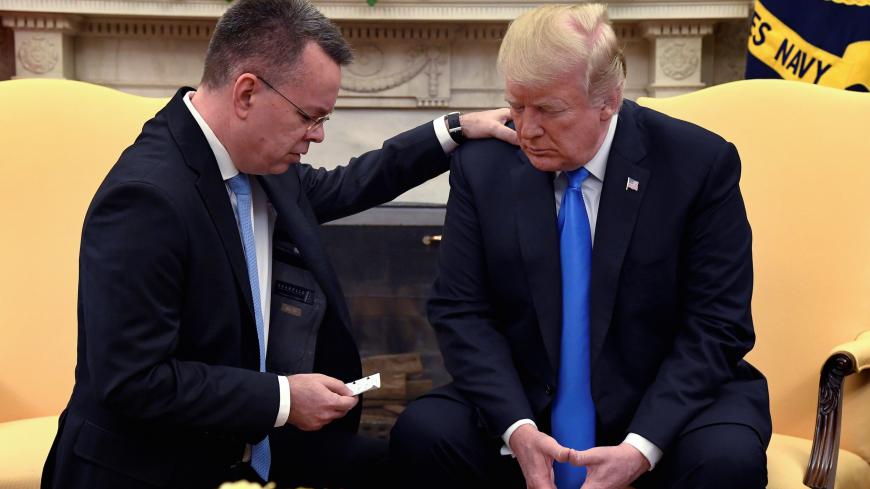 US President Donald Trump closes his eyes in prayer along with Pastor Andrew Brunson after his release from two years of Turkish detention, in the Oval Office of the White House, Washington, US, Oct. 13, 2018. - REUTERS/Mike Theiler

After securing Turkey’s release last month of a detained US pastor, the Donald Trump administration is lifting sanctions on two Turkish ministers. But the sanctions relief could disincentivize Ankara from releasing several other American prisoners and Turks locally employed by US consular facilities. In return, Turkey has also removed sanctions it placed on US officials in retaliation.

Why it matters: In August, Trump sanctioned Justice Minister Abdulhamit Gul and Interior Minister Suleyman Soylu over the detention of Andrew Brunson, a cause celebre among Trump’s evangelical base. Ankara was likely expecting today’s action as Trump had expressly tied the sanctions exclusively to Brunson and not the other prisoners. Their removal now gives the US less leverage in securing the other prisoners’ release.

Iran sanctions: Turkey is also seeking an exemption from pending US oil sanctions on Iran so that it can keep importing Iranian petroleum. Energy Minister Fatih Donmez told reporters today that Ankara may get a waiver amid reports that the United States intends to give waivers to at least eight countries.

What’s next? Trump also doubled steel and aluminum tariffs on Turkey in August, citing poor bilateral relations. White House spokeswoman Sarah Sanders said the same month that Brunson’s release would not result in tariff relief. And in July, Congress advanced a bill intended to cut Turkey off from certain international lending streams until Ankara frees the remaining prisoners. In the meantime, renewed Turkish attacks on US-backed Kurdish forces in Syria threaten to become the next major irritant in the two allies’ troubled relationship.

Know more: Read congressional correspondent Bryant Harris’ report on how Trump’s singular focus on Brunson helped him rally his evangelical base ahead of next week’s mid-term elections. And for an indication of how Congress may seek to free the remaining prisoners, read his earlier report on the Senate’s Turkey International Financial Institutions Act.