Many streets and squares in Egypt carry the names of Muslim Brotherhood leaders and members — but for not much longer. 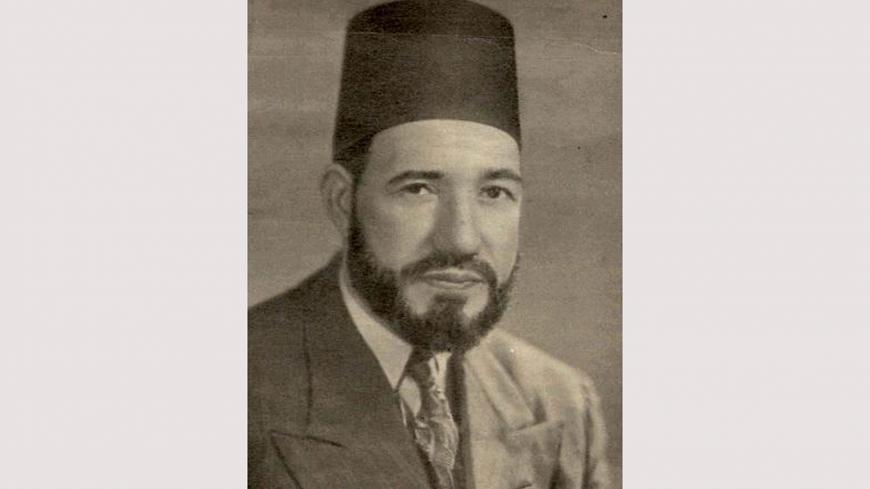 Hassan al-Banna, the founder of the Muslim Brotherhood, seen in an undated photograph. - Wikipedia

The Egyptian government has started a campaign to remove the street name signs that carry the names of leaders and prominent members of the Muslim Brotherhood, the Islamist group that was designated as a terrorist organization following the ousting of President Mohammed Morsi in 2013.

On Oct. 21, Minya Gov. Qassem Hussein changed the name of a street in the governorate from Hassan al-Banna, the founder of the Muslim Brotherhood, to Umar Ibn al-Khattab, one of the companions of the Prophet Muhammad.

Hussein signaled that every name of a street and square across the governorate would be subject to review. “Streets that carry the names of Muslim Brotherhood members will be changed and named after fallen soldiers as well as historical and public figures who have had a positive impact on society,” he said.

Lawyer Ayman Mahfouz filed a complaint Oct. 23 with Public Prosecutor Nabil Sadek, saying that there are tens — if not hundreds — of streets named after leaders and members of the Muslim Brotherhood in Cairo and other governorates.

Mahfouz said that Google Maps shows that tens of streets in Cairo, Qalubiya, Alexandria, Gharbiya, Daqahliya, Menoufia, Beni Sueif and Minya are named after Hassan al-Banaa and former leading member Sayyid Qutb. He noted that there are many more small streets, squares and alleys in Egypt named after Brotherhood figures, but they do not show up on Google Maps.

The Muslim Brotherhood, which was established in March 1928 in Ismailia governorate, gained momentum and popularity among the public after launching charitable and social services projects in communities. With the rise in the popularity of the group, many streets, especially in underprivileged areas, were named after its founder.

“[The fact that the streets are named after Brotherhood members] undermines the state’s policy of fighting this banned group,” Mahfouz said. He added that maintaining the names makes these figures appear as heroes in the eyes of the public.

Street names started being renamed in the various governorates about two years ago. In August 2015, Cairo governorate renamed Rabia al-Adawyia Square, where the Brotherhood held a popular sit-in in 2013, after former Public Prosecutor Hisham Barakat, who was killed in an attack targeting his convoy in 2015.

Many have praised the decision to rename the streets, saying that it should have been taken sooner.

Gamal Abdel Gawad, a professor of political science at the American University in Cairo, told Al-Monitor that the streets named after Brotherhood members reflects the group's influence in society and the impact it has on citizens.

“Giving streets the names of those people also reflects that they are being revered by some in society, and that the state did not have an ideological disagreement with the Muslim Brotherhood in the past,” he said.

Gawad noted that Egypt has entered into a political and ideological conflict with the Muslim Brotherhood, especially following the ousting of Morsi in 2013.

Parliamentarian Mohamed Abu Hamed said that the decision to rename the streets makes sense because the Muslim Brotherhood is a terrorist group. “It was irrational that names of Brotherhood members and leaders appeared on the streets of Egypt. How can these terrorists' names appear on street signs?” he told Al-Monitor.

Abu Hamed noted that the removal of the names of Brotherhood members comes as part of a wider crackdown on terrorism and extremism. “We should not honor those people, but rather we should honor the soldiers who were killed in terrorist attacks,” he added.

Ordinary citizens have welcomed the move to rename some of the streets in Cairo and other parts of the country. However, they said that it would be difficult for many to start using the new names, as the old names have been used for decades.

“In the short run this will not be effective, but in the long run people will start to use the new names that the state has given to the streets,” Ahmed Essam, a trader who lives near Hisham Barakat Square, told Al-Monitor.

Essam said that although Rabia al-Adawiya Square was renamed in 2015 people are still using the name. “But future generations will definitely use the new names, especially because the Muslim Brotherhood has been stigmatized in society for its hostile and terrorist acts,” he added.

Soheir Ismail, a housewife and resident of the square, said that supporters of the Muslim Brotherhood will keep using the names of their leaders while opponents will do the opposite. “It shows how divided society has become with the creation of a name-focused conflict,” she told Al-Monitor.