Uncertainty remains over whether the American pastor will be released from detention next week by a Turkish court. 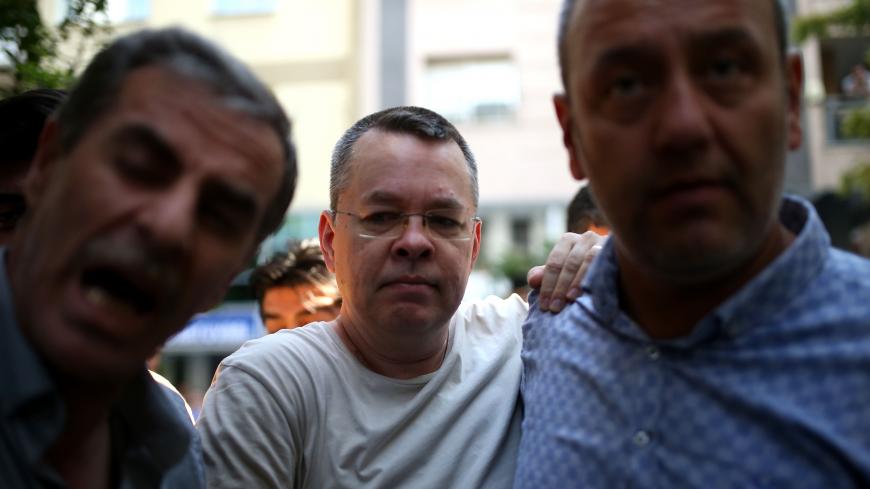 US pastor Andrew Brunson (C) is escorted by Turkish plainclothes police officers as he arrives at his house on July 25, 2018, in Izmir, Turkey. - AFP/Getty Images

The strategic relationship Turkey has had with the United States for over half a century is in danger today over an issue of no strategic importance in itself, but which has turned into a war of nerves in which neither side is prepared to blink first.

The case of American pastor Andrew Brunson is not the main reason underlying present tensions between Ankara and Washington, of course. The sides are at odds over multiple issues that have not been resolved but that do have strategic significance.

Turkey’s vehement opposition to US support for the People's Protection Units is only one example. Ankara says the Syrian Kurdish group is a terrorist organization that poses an existential threat to Turkey's security.

The Brunson affair has, nevertheless, turned into a litmus test for the future of a relationship that both sides hailed as a “lasting strategic partnership” until not so long ago.

The focus now is on Brunson’s Oct. 12 court hearing. That will effectively determine whether ties take a turn for the better or deteriorate further. Brunson, who has been detained in Turkey for two years, will answer espionage charges.

He is also accused of involvement with the outlawed Kurdistan Workers Party (PKK), and the group headed by Fethullah Gulen, the self-exiled Turkish preacher in Pennsylvania whom Ankara accuses of masterminding the abortive coup attempt against President Recep Tayyip Erdogan in July 2016.

Turkey wants Gulen arrested and extradited, but Washington has refused to do so on the grounds of insufficient evidence. This is another sore point between the two countries.

Remarks by US Secretary of State Mike Pompeo in New York last week reinforced the expectation in some quarters that Brunson will be allowed to go free next week. “He could be released this month. He should have been released last month — and he should be released today, in fact,” Pompeo told reporters during the UN General Assembly session.

Washington says the charges against Brunson are baseless and is demanding his immediate and unconditional release. It has refused to negotiate with Ankara until this is done.

Prior to Brunson’s previous court appearance July 18, US hopes were raised that he would be released the way Turkish-German journalist Deniz Yucel was earlier this year.

Yucel, who was also accused of involvement with the PKK, was unexpectedly set free by a court and allowed to return to Germany, while the case against him continues.

The general belief was that Ankara took this step to ease some of the pressure that had built up in Turkish-German ties.

Contrary to widespread expectations, though, the court in the Aegean port city of Izmir ruled that Brunson should remain in prison.

Washington was outraged and angry. President Donald Trump characterized the ruling as a “total disgrace,” and referring to Brunson as a “hostage,” called on Erdogan to “do something to free this wonderful Christian husband and father.”

Such an intervention, however, would have meant a loss of face for Erdogan at home that he could not risk. He would appear to have bowed to foreign pressure, while tens of thousands of people facing charges similar to Brunson’s remained in prison.

Erdogan also has other difficulties to contend with. In 2017 he essentially called for an exchange of Gulen and Brunson, under a “preacher for a preacher” deal, which Washington rejected out of hand.

Other demands by Ankara in exchange for Brunson's release were also rejected.

These included the release of Turkish bank executive Hakan Atilla, who is in prison in New York for circumventing US sanctions on Iran. Ankara also wants a waiver of a fine expected to be imposed by the US Treasury on the Turkish Halkbank, which is accused of facilitating this circumvention.

Turkey says it is not bound by US sanctions, which have no UN endorsement, and is demanding — in what has become a legal tit-for-tat between Ankara and Washington — the immediate and unconditional release of Atilla.

This has left Erdogan in a situation where he cannot afford to release the pastor if he gets nothing substantial in return. Otherwise he provides his domestic opponents with fodder.

Erdogan continues to argue that the court is independent in its decisions but his opponents counter by saying that the judiciary in Turkey looks to the executive in such cases under the presidential system introduced by Erdogan.

Most analysts agree that the Brunson case is more of a political than a legal case at this stage.

The only concession Ankara was prepared to make was to move Brunson from prison July 25 and place him under house arrest in Izmir. This was clearly designed to relieve some of the pressure the United States was putting on Turkey.

It had the opposite effect, though, and resulted in more pressure from Washington. The United States slapped sanctions on Turkey’s interior and justice ministers and doubled the tariffs on Turkish steel and aluminum imports.

As the value of the Turkish lira went into a nosedive against the dollar, Erdogan accused the United States of declaring economic war on Turkey. He was defiant and said Ankara would not bow to such pressures.

In his address opening the legislative year earlier this week Erdogan held his ground. “A pastor who is being tried for his dark ties to terrorist groups is being used [by the United States] to slap sanctions on our country,” he remarked angrily.

There was no hint in his words that would encourage those hoping for Brunson’s release next week.

The current state of Turkish-US ties was also evident in the lack of any contact, other than a handshake in passing, between Erdogan and Trump during last week’s UN General Assembly in New York. Turkish Foreign Minister Mevlut Cavusoglu did not meet with Pompeo in New York either, which diplomats say is also uncharacteristic.

Having been proven mistaken after Brunson’s last court appearance, diplomatic wagerers are hedging their bets this time on how the court will rule Oct.12. Turkish analysts remain divided.

Cansu Camlibel, the daily Hurriyet’s representative in Washington, reported that the American side is still adamant regarding Brunson’s release before moving on to other issues. She added that the Turkish side was also sticking to its position.

“The impression I got from President Erdogan’s circle is that it is difficult for Brunson to be released on Oct. 12 as long as Washington continues to issue ultimatum-like statements,” Camlibel wrote.

“If Ankara can’t pull a rabbit out of the hat over the next two weeks, there are more [US] sanctions on the way,” Camlibel said.

Hurriyet columnist Abdulkadir Selvi, who stands close to the government, is not that pessimistic. He pointed to the damage to Turkey’s economy because of the Brunson affair, and underlined the reassuring remarks by Erdogan to American investors in New York last week.

Selvi said Ankara is actively seeking a formula to resolve this crisis, saying the court next week could decide to release Brunson while his case continues. “In that event we could see Brunson disembarking from a plane in the US on Oct. 13,” he wrote.

Can Atakli, a columnist for the opposition daily Sozcu, also believes that Brunson will be released because Turkey can’t afford the economic damage his case has caused.

Atakli pointed out that Brunson’s lawyers were preparing to take their case to Turkey’s Constitutional Court, and argued that the formula for securing Brunson’s release would be provided by the high court.

Huseyin likoglu, a columnist for the pro-government Yeni Safak newspaper, wrote that Brunson should be released precisely because he has been charged with espionage, thus removing a thorny issue for Turkey.

“Under international practices, agents are generally declared persona non grata and deported,” Likoglu argued, using a somewhat dubious logic. He said this would not involve a loss of face because Turkey would have successfully unearthed an American spy.

Whichever way the Brunson episode ends, many believe that the damage to ties has already been done. A speedy recovery for the “strategic partnership” also appears unlikely because of the backlog of serious issues that have yet to be resolved.

If the Brunson affair is resolved, though, the sides can return to working on this backlog. For the moment, however, that remains a big if.