Is Turkey’s 'strategic partnership' with America coming to an end?

An expert maintains that if solutions to the structural factors poisoning ties cannot be found, Turkish-American relations will continue to deteriorate. 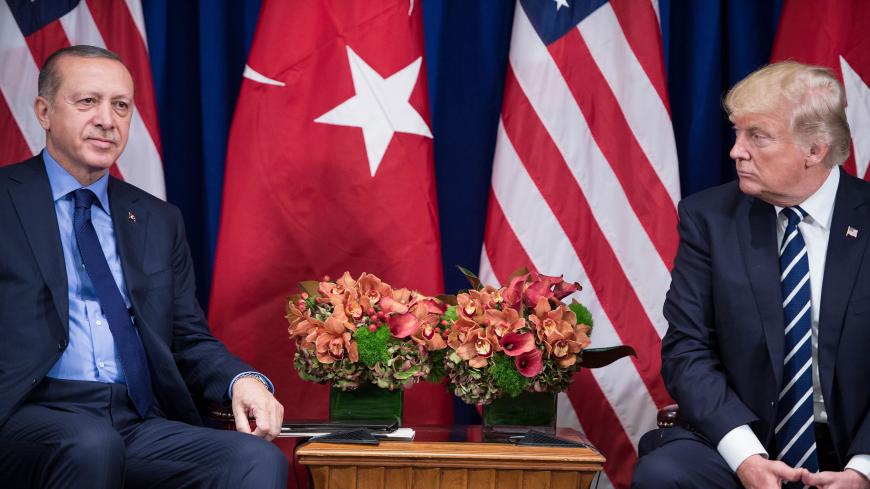 President Recep Tayyip Erdogan has ratcheted up the rhetoric against the United States, after the delegation he dispatched to Washington last week failed to secure a diplomatic solution to the crisis over American pastor Andrew Brunson.

Erdogan is threatening now to end Turkey’s alliance with the United States and to develop strategic ties with Russia and China.

“Before it is too late, Washington must give up the misguided notion that our relationship can be asymmetrical and come to terms with the fact that Turkey has alternatives,” Erdogan wrote in an opinion piece for The New York Times on Aug. 10.

“Failure to reverse this trend of unilateralism and disrespect will require us to start looking for new friends and allies,” he added.

Russian Foreign Minister Sergey Lavrov was in Ankara on Tuesday for talks and told reporters after meeting Foreign Minister Mevlut Cavusoglu that Russia was ready to develop strategic ties with Turkey.

Brunson, who remains under house arrest in Turkey, has effectively become the litmus test for the future of Turkish-American ties.

The Brunson affair, however, is not the cause of the current state of affairs; many say his case only acted as the final trigger, given the backlog of serious differences over multiple core issues.

These include the refusal by Washington to act against Fethullah Gulen, the Turkish preacher residing in Pennsylvania whom Ankara accuses of masterminding the abortive coup attempt against Erdogan in 2016.

Washington’s dithering as the coup attempt was unfolding, without condemning it outright, has also left many Turks believing that the US government wanted to see Erdogan toppled.

Also fueling tensions are US support for the Kurdish People's Protection Units in Syria, a group that Turkey considers to be an existential threat to its security, and Ankara’s decision to purchase the Russian-made S-400 defense system against ballistic missiles.

Turkey is also demanding the release of Hakan Atilla, a senior executive from the Turkish state-owned Halkbank, who received a 32-month sentence in New York for circumventing US sanctions on Iran. Ankara is now bracing itself for a heavy fine against Halkbank.

The meeting in Washington last week reportedly collapsed when the Turkish delegation’s efforts to exchange Atilla for Brunson, under a deal that would also see the US Treasury drop its fine against Halkbank, fell on deaf ears.

The American side is said to have demanded the immediate and unconditional release of Brunson before proceeding further.

Brunson, who was arrested two years ago, is charged with sympathizing with the group that tried to topple Erdogan in 2016, and also with aiding and abetting the outlawed Kurdistan Workers Party.

Washington says these charges are baseless and wants Brunson's immediate release, as well as the release of other US citizens and US consular employees held in Turkey on similar charges.

The United States imposed sanctions against Turkey’s justice and interior ministers over these cases.

Brunson’s release under these conditions has become all but impossible, given the massive loss of prestige this would entail for Erdogan in Ankara if he appeared to be caving in to US pressure.

The value of the Turkish lira took a nosedive after the tweet, appearing to corroborate Erdogan’s assertion that the United States has declared economic war on Turkey.

In his Twitter message, Trump also said, “The Turkish Lira slides rapidly downward against our very strong Dollar,” and added, “Our relations with Turkey are not good at this time!”

Hurriyet columnist Abdulkadir Selvi argued that this crisis with Washington has turned into an arm-wrestling match between Erdogan and Trump. “The key to solving it lies in the hands of these two leaders,” Selvi wrote.

Erdogan, however, is on the warpath, accusing the United States of “betrayal” and calling on citizens to show their patriotism by resisting Washington’s efforts to harm Turkey.

He maintains that the United States is using “economic weapons, instead of cannons, bullets and missiles” and called on Turks from all walks of life to trade in their dollars and shore up the lira.

Erdogan, during a visit to the Black Sea province of Ordu over the weekend, said it was a pity that America had swapped its strategic partner for a pastor.

“Whatever our stance was until now, this is what it will be from now on,” he said, indicating in so many words that Brunson’s release is not in the cards.

Erdogan also announced Aug. 14 that Turkey would impose tariffs on American electronic imports. “If they have iPhone, there is Samsung on the other side. In our country we have Venus and Vestel,” Erdogan said during an address in Ankara. Venus and Vestel are domestic manufacturers of electronic equipment.

Meanwhile, Turkey’s national carrier THY announced it would no longer accept advertisements from US companies.

This requires a review by the Pentagon within 90 days on Turkish-US relations before F-35 fighters can be delivered to Turkey.

According to a statement by While House spokeswoman Sarah Sanders, the detention of Brunson was discussed.

The Turkish side reportedly asked for the meeting with Bolton. If its intention was to talk about multiple issues, including the F-35s, Sanders’ brief statement showed that Washington continues to demand Brunson’s release before other matters are discussed.

However, news of the Kilic-Bolton meeting signaled that diplomatic channels remain open and reportedly contributed to the slight gains by the Turkish lira against the dollar.

The problems that have besieged Turkish-American ties appear insurmountable, though, without major compromises on both sides. There was a time when the mutual strategic interest would carry Turkish-American relations through thick and thin. That is no longer the case.

Foreign policy expert Galip Dalay pointed out that the strategic Turkish-American relationship was a product of the Cold War. “There was no major effort to adjust ties to the post-Cold War period,” Dalay wrote in an article for the daily Karar.

He underlined that the gap in the threat perception of the two countries after the Cold War has been widening, and referred to developments in Syria as the most recent example.

“There is also a weakening in support in the US and in Turkey for Turkish-American ties, both on the structural level, and among elites,” Dalay wrote.

Traditionally the Foreign Ministry and the military in Turkey, and the Pentagon and the military in the United States played central roles in maintaining good ties, and prevented differences from spilling over, but this is no longer the case, Dalay said.

“If solutions to the structural factors poisoning ties cannot be found, Turkish-American relations will continue to deteriorate, independently of the quality of the US president,” Dalay argued.

Yasar Yakis, a founding member of Erdogan’s Justice and Development Party (AKP) and a former foreign minister, believes that Washington may wind up bruised because of the current crisis with Turkey, but that Ankara will come out battered.

“If the damage done to the US is 1%, the damage to Turkey will be 50%,” Yakis, who was expelled from the AKP for his political apostasy, said in an interview with the Deutsche Welle media company.

Yakis said Ankara had also mismanaged the Brunson affair because competent diplomats were not tasked with trying to sort out this crisis.

He added that searching for new allies would be a “historic mistake” for Turkey. “Turkey should remain a strong partner in NATO, instead of seeking new allies and alternatives. … Otherwise it is obvious that it will drift into dangerous waters,” Yakis said.

However, with two determined — some would say stubborn and impetuous — leaders on both sides, it is hard to see either side making a great effort to salvage what is left of their “strategic partnership."