Gulf countries concerned as Turkey cozies up to Kuwait

Turkey’s military cooperation accord with Kuwait raises eyebrows in the Gulf. 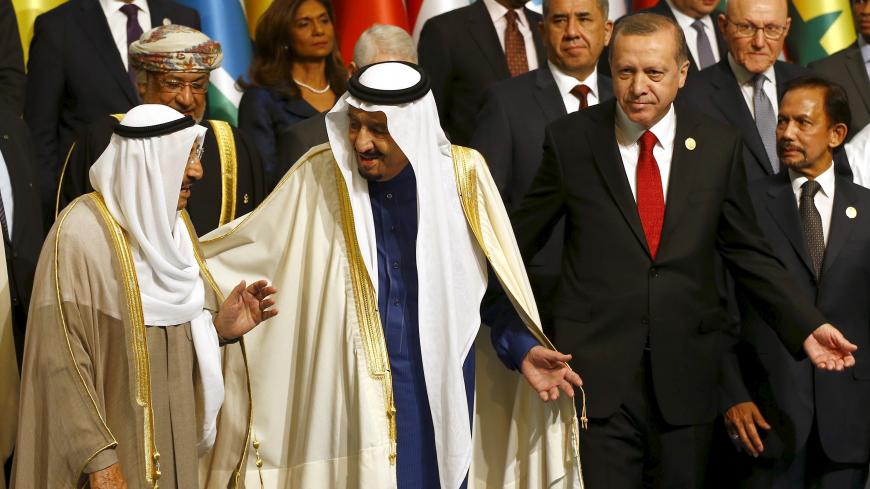 As repercussions from Turkey's move to set up a military base in Qatar continue to resonate, Ankara is going ahead with adding a military dimension to relations with Kuwait. Ankara, whose relations with Kuwait have been warming for the past two years, recently signed a military cooperation agreement with the Persian Gulf nation bordering Iraq and Saudi Arabia.

According to the agreement signed by deputy chiefs of staff of the two countries during the Turkey-Kuwait Military Cooperation Committee meeting, the two nations are planning to share their military experiences and coordinate their activities beginning in 2019.

The agreement occurs amid the backdrop of Turkey’s close ties with the Muslim Brotherhood, Turkish moves to become a shield for Qatar against the Saudi-United Arab Emirates alliance, the decision by Riyadh to assist Kurds in Syria and the tensions that erupted with this month's disappearance of the Saudi journalist Jamal Khashoggi in Istanbul.

Kuwait became concerned about the intentions of Mohammed bin Salman after he was named Saudi Arabia's crown prince last year. Moreover, the decision by the Trump administration to support Riyadh took away some of Kuwait's defenses.

Mohammed's visit to Kuwait on Sept. 30 to discuss the recurring problems between the two countries and the Qatar issue did not go well. The meeting, designated to last some two hours, was cut short.

The crisis between the two countries escalated in 2014 due to disputes over their common oil fields of Khafji and Wafra. Kuwait had opposed the inclusion of Chevron in the operation and the Saudis unilaterally ceased production. Kuwait says it was denied $18 billion in revenue and wants to be compensated. US President Donald Trump wants for there to a Saudi boost to the world oil supply in lieu of an expected drop in Iranian production, and Mohammed wants to resume production in the common oil fields as soon as possible. In Kuwait's political corridors, Mohammed is now referred to as “little Saddam.”

To cope with these pressures, Kuwait has been approaching actors such as Turkey who could help provide some form of protection. One Saudi prince voiced Riyadh's discomfort with the Kuwaiti moves by openly calling for the country's occupation. Prince Khalid bin Abdullah bin Faisal bin Turki, in a tweet, called "for a new ‘Determined Storm Operation’ to free Kuwait from the dictates of Ihvan [the Muslim Brotherhood] and Hamads [a derisive term for Qatar's leadership].”

The enmity between Kuwait and Saudi Arabia dates to the border dispute during the collapse of the Ottoman Empire. Saudis had rejected the 1913 British-Ottoman Accord that drew the borders of Kuwait, Qatar, Bahrain and the Shatt al-Arab and declared war on Kuwait. In 1922, under the Uqair Protocol imposed by the British, two-thirds of the Kuwait territory was given to the Saudis. Kuwaitis, who were not invited to the bargaining table, were represented by British envoy Percy Cox. Kuwaitis have never forgotten this stab.

A military accord with Turkey now raises the question of whether Kuwait, like Qatar, is looking for military protection. Editor Abdul Bari Atwan of Rai al Yawm newspaper, in a story based on Kuwaiti sources, wrote that the Kuwaiti-Turkish accord could lead to deployment of Turkish troops in Kuwait. “The accord doesn’t rule out deployment of Turkish troops in Kuwait and purchase of Turkish weapons, including armored vehicles, along the lines of the Qatar-Turkey accord that defends Doha against Gulf countries,” Atwan wrote.

Turkey’s efforts to sell defense industry products to Kuwait are not a secret. Turkey participated in the 2017 Kuwaiti Defense and Aeronautics Fair with 23 companies.

Lebanese researcher Ali Mourad said Kuwaitis are seriously worried about being invaded. He told Al-Monitor, “Kuwaitis need a regional force like Turkey to deal with Saudi ill intentions. They are truly afraid of a Saudi invasion because of a hegemony crisis in the oil fields, Kuwait’s ties with Qatar and the blank check Trump has issued to MBS [Mohammed bin Salman].”

Mourad said, “Because of his prevailing fears, Sheikh Al-Sabah went to Washington in September 2017 to beef up ties with Trump. For the past three years the Kuwaiti ambassador in Washington has been hosting the Kuwaiti National Day receptions at the Trump International DC hotel. They are of course trying to take steps to free themselves from Saudi hegemony.”

Mourad added, “But the situation is not the same nowadays. Kuwaitis fear a critical threat from a rogue clique in Saudi Arabia. This is why they call MBS ‘little Saddam.’ Emir Sheikh Sabah is in a weak position. This is why he is looking for alliance with Erdogan. This is not really what they want but they have no other choice. As a regional force they can’t ask for help from Iran. There is no regional power other than Turkey.”

The Kuwaiti emir, because of his country's fragile position, has been pursuing ways to avoid troubles by resorting to “mediation diplomacy.” Kuwaiti mediation had helped during the 2014 crisis with Qatar. But Trump’s affinity with the Saudi-UAE camp in the 2017 crisis made Kuwait’s mediation efforts seemingly useless.

Sabah, thinking Kuwait is next after Qatar, had angered Saudi Arabia and the United Arab Emirates by telling Trump that the Saudis and Emiratis want a military solution to the Gulf crisis. Saudis claim Qataris are influencing Kuwait via the Muslim Brotherhood, while Kuwaitis accuse Saudis of employing Kuwaiti Salafis who graduated from the University of Medina as “agents of influence.”

Relations between Turkey and Kuwait gained momentum because Kuwaitis were grateful to Turkey for its position against Iraq's 1990 invasion of Kuwait. After 2011, Turkey’s Justice and Development Party received the support of Kuwaitis who sympathized with the Syrian opposition. Both Salafi and Muslim Brotherhood groups were able to transit to Syria via Turkey. The number of Kuwaiti tourists to Turkey increased manyfold. Relations gained further momentum with the signing of six agreements during the Ankara visit of Kuwaiti Prime Minister Sheikh Jaber Al-Mubarak Al-Sabah in September 2017.

Kuwaiti parliament Speaker Merzuk Al-Ghanim surprised everyone at the 2018 Assembly of Eurasia Parliamentary Leaders at Antalya by saying, “Turkey is not a banana republic. Those who want a economic war against it will not succeed.’’ This remark, seen as a response to the Saudi-UAE camp, was widely reported in the Gulf media.

In recent years Turkish construction companies in Kuwait have been awarded 30 projects worth $6.5 billion, including the Kuwait international airport. Ankara is now working to hard to get a bigger share of contracts from Kuwait’s 2035 Development Plan.