In a statement Friday night, Saudi Arabia said Jamal Khashoggi died in an Oct. 2 fistfight at the country’s Istanbul consulate, after days of denying knowledge of the dissident journalist’s whereabouts. 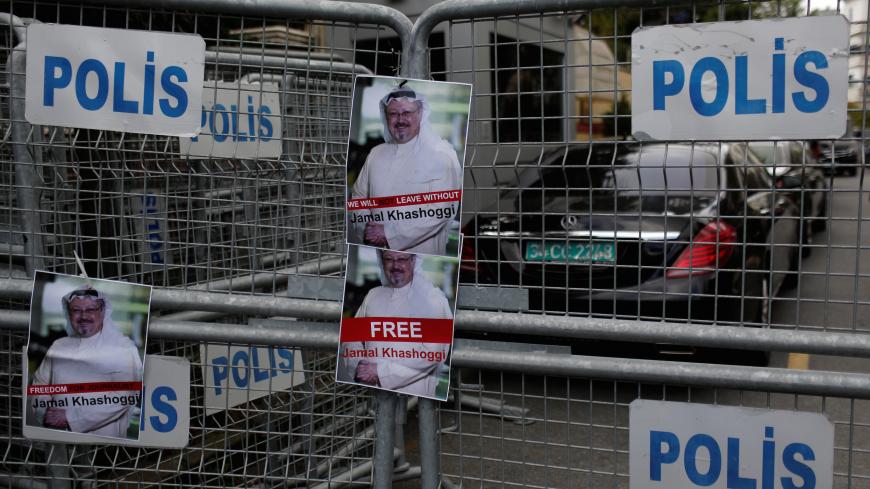 Pictures of Saudi journalist Jamal Khashoggi are placed on security barriers during a protest outside the Saudi Consulate in Istanbul, Turkey, Oct. 8, 2018. - REUTERS/Murad Sezer

More than two weeks after Jamal Khashoggi's disappearance from the Saudi Consulate in Istanbul, Saudi Arabia said late Friday that the journalist was killed in an altercation in the diplomatic facility.

The official confirmation of Khashoggi’s death, following mounting international pressure and a steady drip of leaks from Turkish sources, will come with a house-cleaning of top leadership, the Saudi Attorney General's office said in a statement. Riyadh had maintained until now that Khashoggi left the consulate safely Oct. 2 and that it had no idea of his whereabouts.

In all, 18 Saudis have been arrested in connection with Khashoggi’s case, though none were immediately identified.

“The preliminary investigations conducted by the Public Prosecution showed that the suspect[s] had travelled to Istanbul to meet with ... Khashoggi as there were indications of the possibility of his returning back to the country,” the kingdom said in a statement carried by the official Saudi News Agency. "The results of the preliminary investigations also revealed that the discussions [between Khashoggi and the suspects] did not go as required and developed in a negative way [and] led to a fight and a quarrel [and] the brawl aggravated to lead to his death and their attempt to conceal and cover what happened.”

“Dismissing Saud al-Qahtani and Ahmad al-Assiri is as close to MBS as it is possible to go,” tweeted Kristian Ulrichsen, a fellow at the Baker Institute at Rice University who specializes in Arabian Gulf affairs. “Interesting to see if these moves prove sufficient. If the drip-drip of additional details continue, there's no buffer to shield MBS any longer.”

The kingdom said its investigation is still ongoing. And the king has also called for the formation of a committee led by Prince Mohammed to investigate the country’s intelligence community.

The inquiries will likely be dogged by international skepticism at the Saudis' changing storyline.

The description of Khashoggi's death does not mesh with numerous anonymous Turkish leaks that a kill team cut the journalist's body into pieces while he was still alive. The New York Times reports that many of the 15 alleged assassins identified by Turkish intelligence leaks had close ties to the monarch-in-waiting.

Skeptics in Congress — many of whom have complained about lack of access to US intelligence about the case — immediately pushed back after the announcement, as Riyadh offered few details to back up its statement.

“To say that I am skeptical of the new Saudi narrative about Mr. Khashoggi is an understatement,” tweeted Sen. Lindsey Graham, R-S.C. Graham previously said Prince Mohammed “has got to go” over Khashoggi's death.

“Where is the body,” tweeted Rep. Eric Swalwell, D-Calif., the ranking member on the House Intelligence subcommittee overseeing the CIA. “#Khashoggi’s family deserve immediate custody of the remains as they seek some measure of closure.”