Although the Palestinian Authority (PA) backs Saudi Arabia in the Jamal Khashoggi affair, reflecting the PA's concern with political relations and a desire for material support, journalists and intellectuals are calling for those responsible to be held accountable. 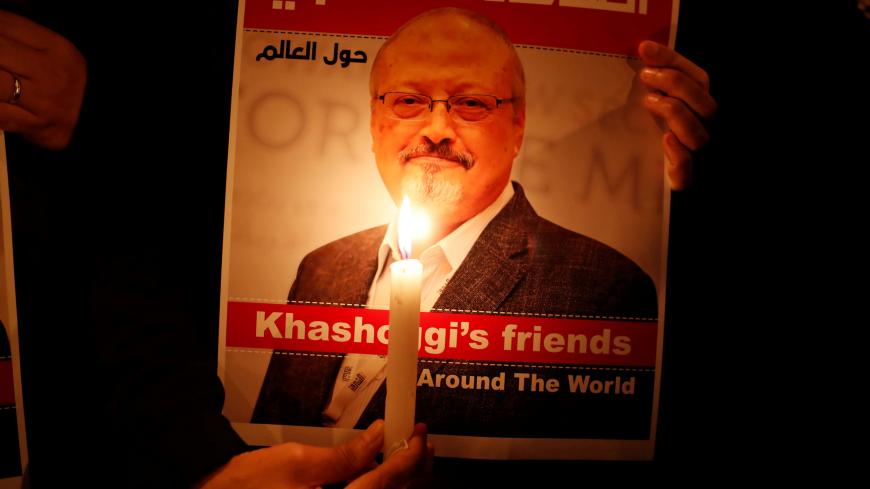 A demonstrator holds a poster with a picture of Saudi journalist Jamal Khashoggi outside the Saudi Arabia Consulate in Istanbul, Turkey, Oct. 25, 2018. - REUTERS/Osman Orsal

The entire world has been preoccupied with the slaying Oct. 2 of Saudi journalist and Washington Post contributor Jamal Khashoggi at the Saudi consulate in Istanbul. Some Palestinians support Saudi Arabia while others blame Saudi officials for what they believe was an assassination. A group of journalists has launched a campaign seeking justice for their colleague and protection for members of their profession. One prominent writer said the sorrow he felt moved him to resign.

Palestinian President Mahmoud Abbas had issued a statement Oct. 14 expressing his appreciation of Saudi support for the Palestinian cause and said Palestine is standing by Saudi Arabia’s side.

On Oct. 20, the Palestinian Authority (PA) announced it officially supports Saudi Arabia and the latter's narrative regarding Khashoggi's killing. The PA said Saudi Arabia, under the leadership of King Salman bin Abdul-Aziz Al Saud and Crown Prince Mohammed bin Salman, is a "state of justice, values and principles" and praised Saudi Arabia's efforts to uphold the law.

Turkish officials claim to have evidence that Khashoggi was tortured and his body dismembered with a saw in the consulate by a Saudi hit squad. His body hasn't been found, despite extensive searches.

The official Palestinian support for Saudi Arabia is inconsistent with that of many Palestinian writers, journalists and intellectuals who expressed their anger at Khashoggi’s fate, which they consider an assassination of free speech.

Palestinian journalist and novelist Rabai al-Madhoun, editor of Palestinian affairs at Saudi daily Asharq Al-Awsat, posted on his Facebook page Oct. 22, “Khashoggi has made me retire today. I resigned from the newspaper after 18 years because what happened with Khashoggi has turned my life upside down.”

Madhoun's resignation had a major impact on the Palestinian press and culture, be it because of the admiration he has won over the years or for his courage to express his position on this shocking incident. His post had received more than 1,700 likes, 215 comments and 200 shares as of Oct. 30.

Speaking to Al-Monitor from London, Madhoun said, “My stance is a matter of principle. Khashoggi’s death was shocking, horrifying, terrifying, painful, terrible and unprecedented, and all those who planned to kill him and had anything to do with the murder should be punished for their role in the crime.”

Madhoun, 73, is one of Palestine’s most prominent novelists and has worked for Arab, Palestinian and international newspapers.

Before Madhoun's resignation, a group of Palestinian journalists and writers on Oct. 19 launched an online petition calling for officials to “reveal the fate of Khashoggi, hold accountable those behind his disappearance, enact laws to protect journalists and ensure their freedom of action, and punish those who violate their rights.”

Daoud Kuttab, a Palestinian Al-Monitor contributor who initiated the campaign, told Al-Monitor the Khashoggi incident "prompted us to prepare a petition demanding that [those responsible] disclose what happened to him, even after his death was announced. The petition is still valid."

Fadi Quran is a senior campaigner at Avaaz ("Voice") in the Middle East, a 16-language global petition site that is similar in function to Change.org, which also has a Khashoggi petition that had about 65,000 signatures as of Oct. 30. Quran, who is overseeing the Khashoggi petition drive on Avaaz, told Al-Monitor the campaign seeks to gather signatures "from senior Palestinian authors" and demands "that such crimes be prevented."

"The petition has no expiry date; we are still collecting signatures and sending it to many who may share our opinion," he added.

The difference in the Palestinian positions on the Khashoggi incident has been obvious on social media and in articles by Palestinian writers who stood beside Khashoggi, despite the PA’s position in support of Saudi Arabia.

“A bone saw ended Khashoggi's life, but our pens will fight on his behalf. The chances of our pens winning this battle are greater than any bone saw,” author Wissam Afifah said in an Oct. 25 opinion piece on the Hamas-affiliated website Al-Aqsa.

Political analyst Ashraf al-Ajrami wrote Oct. 24 in the PA-affiliated al-Ayyam, “Khashoggi's death was a humanitarian and political disaster, and a fatal mistake committed by Saudi agencies. It caused a major scandal whose political and economic consequences will be hard for those involved to contain.”

Palestinian Minister of Culture Ehab Bseiso in Ramallah told Al-Monitor, “Palestinian intellectuals have the right to express their positions. In Palestine, we have multiple views in journalism, and we are keen on preserving the freedom of expression without interfering in the political aspect of any issue.”

Bseiso added, “The official Palestinian position was declared, and we stand against any violation against any journalist and writer because of their stances. In light of the Khashoggi incident, we demand justice and protection for authors, without interfering in the policies of neighboring countries.”

Khashoggi's positions were pro-Palestinian. His last tweet, on Oct. 1, read, “I have Palestine on my mind. … Despite the Israeli lobby’s power in limiting any sympathy with it, [Palestine’s] voice rises.”

On Sept. 30, he had tweeted, “Israel’s actions in the Palestinian territories show discrimination and apartheid.”

In an Oct. 16 YouTube clip, Khashoggi warned Palestinians against giving up Jerusalem to Israel and said the city is as important as Mecca and Medina in Saudi Arabia.

During Israel's war on Gaza in 2014, he had said Hamas proved that its modest rockets have become far more threatening.

Ahmed Zaghbar, head of the Palestinian Press Bloc in Gaza, told Al-Monitor, “We express our absolute rejection of the terrorist crime that took Khashoggi's life in the most brutal of ways. We believe that he paid with his life for the freedom that he always called for.”

Zaghbar added, “His assassination represents an attack on the free entities in the world. The press should condemn this crime, and those responsible should not go unpunished.”