A small home distiller wants to revive the long tradition of alcohol production in the Iraqi town of Bashiqa, which was once a center of multiculturalism and revered for its booze. 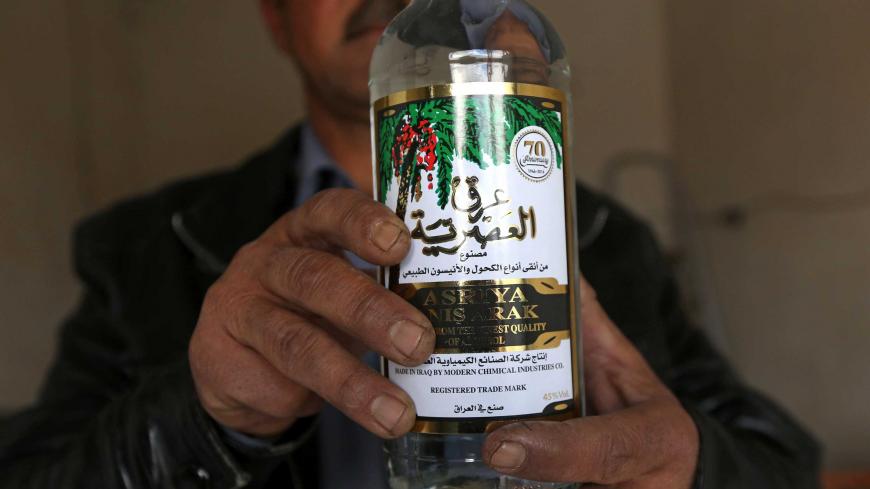 An Iraqi man shows a bottle of the popular anise-flavored spirit arak at his shop in the town of Bashiqa, Iraq, Feb. 17, 2017. - SAFIN HAMED/AFP/Getty Images

Distiller Amer ad-Doumali launched “Arak Bashiqa” in September, a new brand of the Levant's traditional anise drink whose recipe is centered on dates. It was a bold move in conservative Iraq, where a yet-unenforced 2016 law banned the production and trade of alcohol.

Doumali’s new brand is the product of his home distillery in the town of Bahzani in Iraq’s northern Ninaveh province. The town is very close to Bashiqa, once known as the booze capital of Iraq.

The distillery is the first to be inaugurated since the Islamic State was expelled from the province in 2017.

But Doumali said that production at the distillery “has never been interrupted,” even at the risk of death under IS. “The work secretly continued, although upon the rare demand of trustworthy people. Then we decided to go ahead with commercial production in September,” he told Al-Monitor.

But even with IS out of the way, the Sept.15 opening was a courageous move in the light of the prevailing conservatism in the country, which considers drinking alcoholic beverages against the teachings of Islam.

Despite the long tradition of arak — a transparent drink made with grapes or dates, with anise seed that give a distinct smell and taste — alcohol production in Iraq has suffered many blows since the 1990s. In a 1994 move to bolster conservative support, late President Saddam Hussein shut down the pubs that once characterized Baghdad. Though drinking at home was permitted, Muslims were no longer allowed to stock alcohol in stores and alcohol could not be sold in close vicinity to mosques.

Former judge Ali Tamimi told Al-Monitor, “Law No. 6 of 2001 prohibits the sale of alcoholic beverages, unless there is permit from the Tourism Board and the consent of the municipal council. Alcoholic beverages cannot be sold at home, but only in licensed liquor stores, whose conditions are specified in their permits. Also, Muslims can neither obtain the permit nor work in the sale of alcoholic drinks.”

Tamimi explained, “Sanctions could include closing the shop and fines up to 10 million Iraqi dinars [nearly $10,000].”

Bashiqa, a multiethnic town of Yazidis, Christians and Muslims located in the Ninevah Plains, felt the pressure against alcohol acutely. Nearly 400 arak distilleries closed their doors by 2012, and people who worked in the sector shifted to farming and other industries due to the widespread social prohibitions. Following an IS attack in summer 2014, most habitants, particularly Yazidis and Christians, were forcibly displaced. The remaining home-based arak distilleries shut down out of fear of persecution.

With the defeat of IS, some Iraqis are eager to resume the alcohol trade — both as a business and a way of maintaining their heritage. Many of the shops keep a low profile and display no signs, but they enjoy a brisk trade, particularly in the northern part of the country. The owner of a shop that opened in Mosul in February 2017 told AFP that his small shop served as many as 1,000 customers a day.

“I work in the transportation of different types of alcohol all across the country,” Hatem Hassan told Al-Monitor. “Of course, there is a risk. The goods are often seized at the security checkpoints in Baghdad as well as the central and southern parts.” So what does he do? “The distributor is required to pay a bribe,” he explained.

“The majority of Arak Bashiqa and alcoholic drink consumers are Muslims. It is clear that the conservatives failed to curb the social culture [around alcohol],” he added.

Kheder Khalat Bahzani, an activist and media figure residing in Bashiqa, is more pessimistic about the future of the alcohol production in Iraq. “IS' defeat does not necessarily imply that this industry will blossom,” he told Al-Monitor.

“The arak imports from Lebanon, Greece, Turkey and other countries sold at a low price, among other factors, caused hundreds of distilleries to cease operations,” he said.

Bahzani said that Arak Bashiqa will offer commercial opportunities to many people. “Even those living in the southern parts of the country will [benefit] because distilleries consume a daily amount of 1,000 tons of dates, which are transported in trucks from the south. This would generate jobs for the inhabitants of these regions as well,” he said.

Doumali explained, “Every 450 liters of arak require one ton of dates, 80 kilograms [176 pounds] of anise seeds and 20 kilograms [44 pounds] of apples, in addition to the hundreds of liters of fresh water and spices.”

The culture of alcoholic drinks dates back thousands of years in Iraq. The Sumerian myth tells the story of Enki, god of water, knowledge and mischief, who invited all other gods for a drinking party. But in October 2016, the Iraqi Parliament turned a blind eye to this rich history and outlawed alchohol production.

Speaking to Al-Monitor, sociologist Ahmad Dhahabi said that the law will not stop the practice “in the agricultural countryside, particularly in the northern parts of the country.” But, he warned, “The law is not the [only] problem — there is also a growing influence of the extremist social culture that targets this industry and demands that alcohol should be prohibited.”