The awarding of the Nobel Peace Prize to Yazidi survivor Nadia Murad has raised expectations and hopes for Iraqi minorities, and Yazidis in particular, to prevent suppression against them and to win their rights. 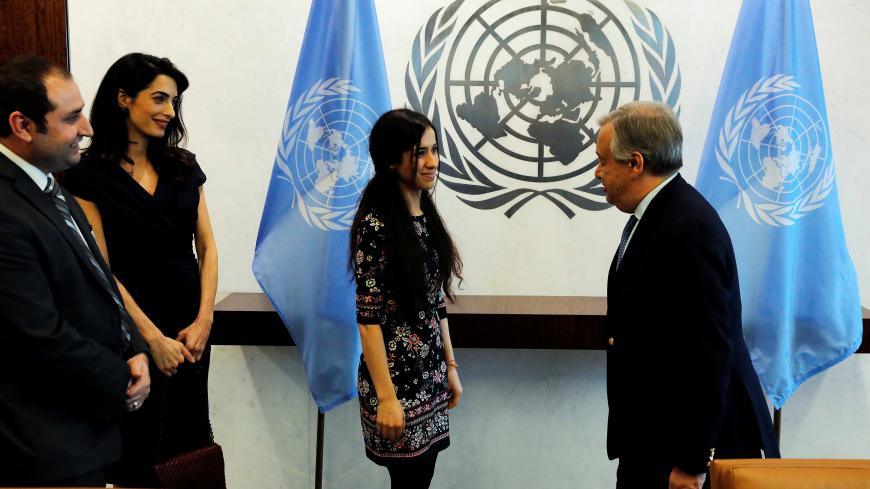 BAGHDAD — Nadia Murad, the Iraqi Yazidi, has been awarded the 2018 Nobel Peace Prize. This has raised the expectations and hopes of Iraqi minorities, especially Yazidis, since she is the first Iraqi to win the prize.

Iraqi political leaders welcomed the award as a tribute to the struggle of the Iraqi people against terrorism and extremism.

Iraqi President Barham Salih called Murad on Oct. 5 to congratulate her on the award. The president said the prize was a tribute to the Iraqis' struggle and steadfastness.

Prime Minister-designate Adel Abdul Mahdi congratulated Murad in an official statement. “I congratulate Iraq and Iraqis and the Yazidi brothers and sisters and I congratulate Nadia Murad for being awarded the 2018 Nobel Peace Prize. She is the Iraqi Yazidi activist, the goodwill ambassador for the dignity of survivors of human trafficking, one of the victims of terrorism, infidelity, mass murder, captivity and assault on the dignity and the right to life.”

He said the prize “is the least that can be offered to her after her suffering and struggle along with her sisters and the Yazidi people and the rest of the Iraqis.”

Part of the importance of the prize lies in that it was awarded to a female activist and genocide survivor who became the spokeswoman for a religious minority whose members were ethnically cleansed.

Murad Ismail, director of the Yazda Foundation, told Al-Monitor that Nadia Murad’s award for the Nobel Peace Prize was an exceptional event that has led to inscribing the name of Iraq in the Nobel records through the Yazidi minority community, and particularly through a woman. He believes the prize should carry a strong positive message to Iraq that all ethnicities are important, and that their rights and dignity matter.

Ismail, who accompanied Murad in her regional and international tours as director of her campaign since the end of 2015 until the beginning of 2018, hopes the prize will be the beginning of a new chapter in Iraq’s history, where religious minorities will be given sufficient attention so as to preserve their presence.

He said there have been warning signs “that these are the last years of having non-Muslim minorities in Iraq and that our country is witnessing the end of religious, ethnic and linguistic diversity.”

Omar al-Shaher, a board member at the Al-Rafidain Center for Dialogue, does not share the same enthusiasm as Ismail for the prize.

“For a society that had been stricken with many catastrophes and tragedies, what does it matter if one of its many victims was internationally honored? Did Murad’s prize turn the tragedies of the Iraqi community into an international affair? I don’t think so,” he said.

Shaher added, “The strong internal distinction between the various Iraqi components turns something such as Murad’s award into anger, even among the Yazidis. Many Yazidis feel angry at Nadia because they think she has risen because of their tragedies, forgetting that she was part of these tragedies.”

He said, “This event was ignored by the Muslim majority in the country for two reasons. The first is that [people are] bored with the condemnations at home and abroad of what happened four years ago and second is an attempt to get rid of the shame that the Islamic State (IS) brought to the country and the religion of Islam and Sunni Islam, in particular.”

Hana Edward, a women's rights activist and secretary of the Iraqi Hope Association, sought to dwell on the prize’s possible positive effects on some segments of society, such as women.

She said that Murad, as a woman, gives an example to Iraq as a whole for overcoming the difficulties faced by women in ethnic conflict areas, and also for overcoming the taboo of sexual violence, opening the door to debate and discussions on these sensitive issues in public and on a daily basis. This has happened in a conservative community where issues related to women are often raised in a careful way. She said Murad’s award provides people with motivation to fight religious extremism and to battle attempts to force Yazidis into converting to Islam.

“She provides hope that women can really make a change,” Edward told Al-Monitor.

The bishop of Chaldeans in Kirkuk and Sulaimaniyah, Youssef Touma, said Murad’s kidnapping and survival helped shed light on a religious minority that the world knew little about before the 2014 genocide. However, he said that at the domestic level, the prize has embarrassed some of the political elites, who have to reconsider their policies on minorities. Touma said the genocide that took place was the result of accumulated neglect and lack of protection for minorities.

In 2016, Murad was named the UN goodwill ambassador for the dignity of survivors of human trafficking and was awarded the Council of Europe Vaclav Havel Human Rights Prize and, along with fellow Yazidi abductee Lamiya Aji Bashar, the Sakharov Prize for Freedom of Thought.

“Her prizes came as a judgment of all the years of oppression and suffering of this minority and other minorities, and a blow to all those who try to empty Iraq of its diversity,” the bishop told Al-Monitor.

Murad’s award may help change the priority of addressing the issues of minorities at the level of state institutions.

Saeb Khadr, a member of the Iraqi parliament for the Yazidis, said Murad’s prize and her calls for preserving the rights of minorities, and of Yazidis in particular, will make it easier (albeit still complicated) to include this issue on the agenda of the Iraqi parliament and government. He said the same is true for the demands for the return of the displaced to Sinjar, four years after the genocide.

Al-Monitor met with several Yazidi activists in Erbil and Dahuk. Yazidis in the region amount to only a few thousand now, as opposed to 400,000 who lived in Sinjar prior to 2014. The main reason that many are not returning is the political struggle over influence between different political forces over these areas, especially between Baghdad and Erbil, according to Khadr and other activists.

Khadr said Murad’s award could open the door to the discussion of other issues, such as increasing the number of Yazidi seats in the federal parliament from one to three, holding accountable the perpetrators of the crimes against the Yazidis and working on returning the kidnapped Yazidi women who are still held captive by some IS members.