The right is trying to distance the Rabin family from the commemoration of assassinated Prime Minister Yitzhak Rabin as it plays down the incitement to violence that lead to his death. 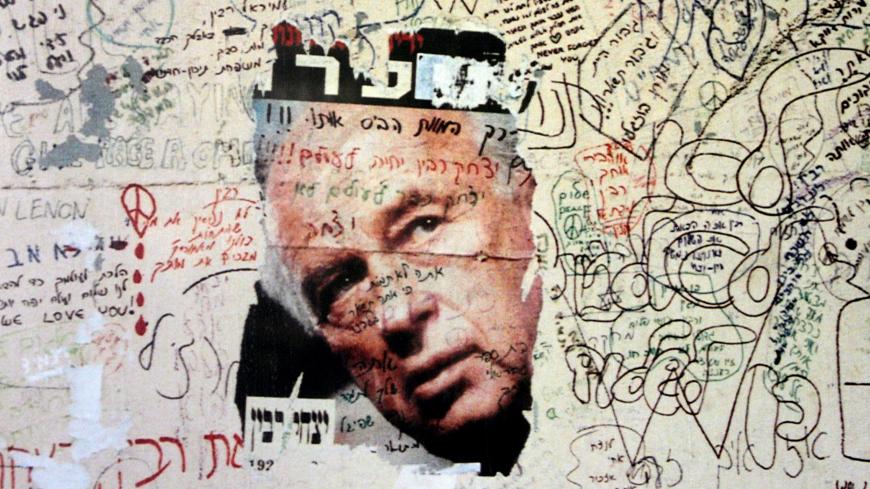 A poster of the late Israeli Prime Minister Yitzhak Rabin is seen on a wall near his memorial in Tel Aviv, Israel, Nov. 3, 2005. - REUTERS/Gil Cohen Magen

This week’s Memorial Day commemorating the assassination of Prime Minister Yitzhak Rabin showed that large swaths of the right deny that there was any incitement campaign against Rabin in the days and weeks leading up to his assassination. Their denial is part of a larger pushback against any criticism of the right’s dangerous policies under the government of Prime Minister Benjamin Netanyahu.

This effort culminated with Knesset member Bezalel Smotrich (HaBayit HaYehudi) launching a campaign to ban the Rabin family from speaking at the official memorial service for the assassinated prime minister. It came in response to a scathing speech by Rabin’s granddaughter Noa Rotman, in which she charged Netanyahu and his ministers with learning nothing from what happened, so that calls of “traitor” have been extended to anyone who criticizes the policies of Netanyahu and the right. “Don’t keep repeating here that Rabin wasn’t a traitor,” she said. “In Israel, criticism is considered treason. If you don’t stop the incitement path of division, partisanship and attacks, blood will be again spilled here.”

Earlier, Rabin’s grandson Yonatan Ben Artzi attacked the prime minister directly. At the lighting of a memorial candle at the president’s house, he echoed the disparaging statements used by Netanyahu to attack his critics, warning, “A leadership … that defines and catalogs anyone who thinks differently as a ‘sourpuss’ or a ‘leftist’ is breaking us apart and will bring about the next destruction.”

Smotrich then tweeted, “Unfortunately, there are plenty of people who are murdered in Israel, yet none of them gets an official memorial day. … On a personal level, the Rabin family is no different from the family of any other victim. They have no relevance whatsoever to the official memorial day or ceremonies.” He added that if the family feels a need to make verbal attacks, he would have no problem with them organizing alternative ceremonies of their own, where they can say whatever they want — to themselves.

If Smotrich were expressing his personal opinion, it could perhaps be dismissed as insensitive drivel. But he was giving voice to what many on the pro-settler right believe. Even today, 23 years after the assassination, the right has not taken back calling Rabin a “traitor.” Even today, anyone who takes a stand against the right or challenges Israel’s settler policy is immediately marked for derision and disgrace, called a deluded leftist at best or a traitor at worst. All that matters is that they shut up.

This week’s denial on the right focused on both the past and the future, while delving into whether Rabin committed treason (by signing the Oslo Accords). The discussion was led by Knesset members and ministers alike, with the right-wing media eagerly joining in. It included Channel 7, the media voice of the settlers. One of its representatives, Itamar Segal, is an ordained rabbi and a major in the reserves. He wrote that Rabin was not a traitor, because for that to be true, he would have to be judged for everything he did in his life. On the other hand, he continued, “The Land of Israel was certainly betrayed. It was sold for a pot of lentil soup” (a reference to Biblical Esau selling his birthright to Jacob for a bowl of lentils). He ended his article with, “Rest in peace, but Oslo and its consequences deserve to be buried like a dead donkey.”

Support for this narrative seems to come directly from the right-wing leadership. Justice Minister Ayelet Shaked, a member of Smotrich’s party, tried to downplay the intensity of the incitement leading to the assassination. She claimed that it could not be attributed to a single group and that violent discourse comes from both sides. Knesset member Shelly Yachimovich (Labor) responded to her from the Knesset podium, “When did anyone on the left pick up a gun and commit murder?”

Culture Minister Miri Regev (Likud) also claimed that there was no incitement from the right in the days leading up to Rabin’s assassination and went on to term the murder itself “a harsh event.” According to Regev, it is the left that not only incites against the right but also remains indifferent to the vicious attacks that the right still faces.

Netanyahu never apologized for participating in 1995 demonstrations at which people held up pictures of Rabin in an SS uniform or carried a coffin through the streets. Still, he attacked Rabin’s granddaughter, saying, “I would expect you to defend me from the people who call me a traitor with the same enthusiasm. This includes, for example, defending me from the person who recently said that Netanyahu is betraying the very nation that he should be serving.” Netanyahu was referring to former Prime Minister Ehud Barak's September statement, “Netanyahu is betraying the people.” Netanyahu failed to draw a distinction between a betrayal of trust and actual calls to kill "the traitors" such as the 1995 chants like “With blood and fire, we will throw Rabin out!”

If this exchange of accusations focused on the events leading up to the assassination and whether Israeli society has learned from them, it could be argued that this is how politics works. But the accusations are attempts to silence people and a daily reality for Israelis in the Netanyahu era.

Over three million Israelis have been born since Rabin’s assassination. Some of them have served and continue to serve in the military while adhering to the narrative that there is no chance for peace. They do not address the unrestrained incitement that preceded the assassination or that Israel was driven off course. The younger generation is being raised and educated with the very messages that Smotrich, Shaked and Regev want them to internalize.

This week I spoke with a young woman who is slated to begin her military service in two months. She told me on condition of anonymity that her high school in the center of the country, in a predominantly upper-middle-class neighborhood, doesn’t teach anything about the Oslo Accords. “What are they?” she asked me. I didn’t know what to tell her.