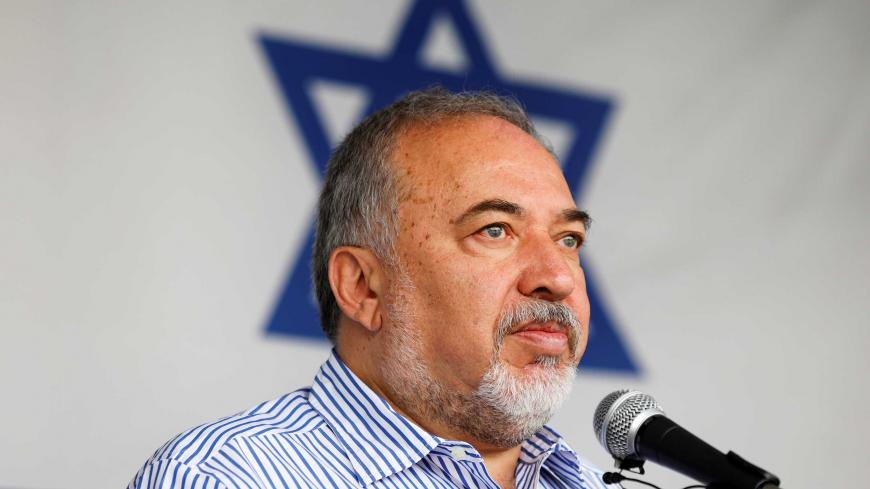 Defense Minister Avigdor Liberman announced Oct. 11 that he will seek government approval to build 31 housing units for Jews in the Hezekiah Quarter of the West Bank town of Hebron.

Why now? One might have thought that the escalation in Gaza would be enough, without him escalating the situation in the West Bank as well. Why did Liberman decide now was the time to prove his loyalty to “strengthening West Bank Jewish settlement in deeds, not words?” One year ago, on Oct. 16, the Israeli planning authorities issued a general building permit for the project. Couldn’t he have waited two or three months for US President Donald Trump to present his promised "deal of the century" as a gesture to the supportive American president?

The Hebron issue is close to the heart of Liberman, himself a settler from Nokdim. Shortly before the March 2015 elections, Liberman took his campaign to the Tomb of the Patriarchs in Hebron, a site holy to both Jews and Muslims.

There he declared on behalf of Yisrael Beitenu, "We have never given away Hebron; I always voted against the release of terrorists and we have always demanded the elimination of Hamas. We all voted against the withdrawal [from Gaza]. … It would be best for all the others [in a future government] to uphold the same principles: eliminating Hamas, capital punishment for terrorists instead of releasing them. Obviously, we will defend our principles: no withdrawal B or withdrawal C plans."

Having failed to deliver on either of those goals, all Liberman can do now is try to pick up votes on the right ahead of the next elections. He is abusing his authority as defense minister to approve construction for Jews in the heart of the predominantly Palestinian West Bank, dashing any remaining prospects of Israeli-Palestinian agreement. That way, he gains on two fronts: First, he distracts the public from the gap between his tough talk of wiping out Hamas in Gaza and the suffering being endured by residents of Israel’s Gaza border communities at the hands of Hamas. Second, he is pushing Prime Minister Benjamin Netanyahu into a corner and forcing him to choose between two unpleasant options. Either he approves the settlement plan, reinforcing criticism against him about sabotaging peace prospects, or he postpones such plans, prompting criticism from right-wing rival parties for damaging the settlement enterprise.

The government’s Oct. 14 decision to approve the plans prove that Netanyahu is more concerned about early elections than international criticism.

In 2017, on the day the planning committee of the Civil Administration approved the construction in Hebron, right-affiliated Channel 7 reported that Liberman told close associates he was the one who had promoted the project. He was quoted as saying, “Hebron is one of the bedrocks of our existence as a people and a nation, and building there is the realization of the Zionist vision.”

But two weeks earlier, that same outlet reported that the building permit was insufficient to start construction and that Netanyahu’s pledge to approve the Hezekiah project did not include the proper land allocation authorization.

According to the report, at that point two political rivals stepped up to the plate — HaBayit HaYehudi leader Naftali Bennett and ultra-Orthodox Shas chair Arieh Deri. At a meeting of the coalition leaders, Netanyahu promised both ministers that he would approve the construction permit, but they did not know that his approval covered only the construction itself and not the land allocation. Aides to Netanyahu denied that Bennett and Deri had pressured the prime minister over the Hebron project and noted in response to the Channel 7 report, “The prime minister already spoke with the Americans about this construction about a month ago.”

In January 2017, as Trump was preparing to move into the White House, Israeli Justice Minister Ayelet Shaked visited the Israeli settlers in Hebron. “I wish to say from this place that in 10 days, all the excuses will be gone. We must build and build, develop Jerusalem as well as Judea and Samaria since it is our home. This is our right,” she said, in an obvious reference to Trump’s support for the Netanyahu government. Shaked boasted that even as the world was condemning Israel for building in the West Bank, she was leading the drive to turn the Jewish settlement within Hebron into an independent municipal entity. Responding to the Peace Now anti-settlement movement, which reminded Shaked that Hebron was populated by 200,000 Palestinians and a minority of 800 Jews, the minister tweeted, “You are right; 800 Jews in the City of our Forefathers is certainly not enough. We are working to obtain additional housing permits for the Hezekiah Quarter. You’re invited to help.”

The Hebron plan is not just another construction project approved by Israel’s right-wing government in a West Bank settlement. If it materializes, it would be the first Israeli building to go up in Hebron in 15 years.

The heads of Israel’s political right are cozying up to those who consider the Jewish doctor who murdered 29 Muslim worshippers at the Tomb of the Patriarchs in 1994 a saint. The threat of a flare up at the Tomb of the Patriarchs is second only to the explosive situation on Jerusalem’s Temple Mount. The websites of Israeli human rights and peace advocacy organizations such as B’tselem, Yesh Din and Machsom Watch are overflowing with reports of abuse by Hebron’s Jewish settlers against their few remaining Palestinian neighbors who have not fled the city’s old quarter. Testimony by veterans who served in the territories is piling up in the offices of Breaking the Silence, the organization of veterans dedicated to documenting the abuse of Palestinians by Jewish settlers under the auspices of the Israel Defense Forces.

Liberman’s 2016 threat to assassinate Hamas leader Ismail Haniyeh within 48 hours has long since become a bad joke. An all-out war against Hamas as seen from the defense minister’s office is very different from the view from the Knesset opposition benches. However, the threat of being restored to those opposition benches or even failing to pass the Knesset threshold apparently narrow the worldview of certain Israeli politicians.

Yisrael Beitenu’s grim poll results in comparison to the Likud and HaBayit HaYehudi are once again stirring up exaggerated and dangerous militancy on the part of Liberman and other politicians competing for constituents. The affair of the 31 Hebron housing units is additional proof of the self-proclaimed “national camp” bloc's allegiance to radical and nationalist sentiment.

As the prime minister’s office said it had discussed the issue with the Americans, it would be interesting to know whether the US administration signaled to Netanyahu that expanding the Jewish settlement in the heart of an Arab city promotes peace in the same way it thinks moving the US Embassy to Jerusalem does.