As Iraq's security forces have weakened and violence has increased, observers question whether the country could handle a possible resurgence of terrorists. 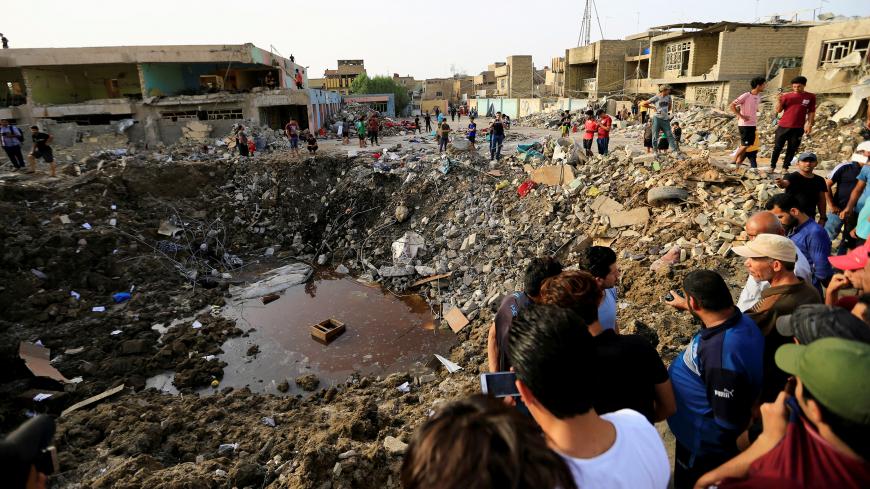 A recent spate of attacks in Iraq killed dozens of civilians and wounded many more as officials fear terrorist groups may be gaining ground once again.

In the latest news, a bomb-laden car exploded Oct. 13 in the center of Kirkuk, wounding eight people. This came on the heels of a week filled with bombings, including ones in Baghdad, Salahuddin and Anbar provinces. Baghdad was dealt the heaviest blow, as a series of bombings targeted the capital Oct. 7. Fallujah faced a terrorist bombing on Oct. 6, after a long period of stability there since Iraqi forces liberated it from the Islamic State (IS) in 2016.

IS posted a propaganda video Oct. 11 called Hasad al-Ajnad (Harvest of Soldiers) in which it claimed it had carried out 55 operations in Iraq since Oct. 4, though the claim hasn't been verified.

Russian Deputy Minister of Foreign Affairs Oleg Syromolotov said Oct. 9 that Moscow has information that some terrorists in Idlib, Syria, are attempting to move into Iraq. Idlib, in northwest Syria, is the last stronghold of opponents of President Bashar al-Assad. Jihadi factions of Hayat Tahrir al-Sham, a group that broke off from al-Qaeda, are active there. IS also has a small presence in the province.

Some believe the recent car bombings are linked to Syria's political situation.

Ali al-Sunaid, leader of the Victory Alliance political party, considers the bombings in several provinces to be political messages designed to pressure Adel Abdul Mahdi, the incoming prime minister. Sunaid said, “The recent bombings aim at foiling the reform project that Mahdi was tasked with, and at pressuring him to choose new ministers based on the quota system.” That controversial system is designed to ensure fair representation among various segments of the population: The presidency, a largely symbolic position, is reserved for a Kurd; the prime minister's post goes to a Shiite Muslim; and a Sunni Muslim assumes the position of parliament speaker.

Sheikh Maitham al-Zaidi, general commander of al-Abbas Combat Division, which is part of the Popular Mobilization Units (PMU), said that the political situation can be affected by foreign powers, which confuses the security situation.

“Iraq is the stage for international intelligence operations and regional desires and agendas that most Iraqi politicians implement. For that reason, the security situation is always shaky," he told Al-Monitor. “The incidents don't necessarily stem from terrorists entering Iraq from Syria. There are terrorist groups in the country that become active every once in a while, depending on the security and political situation.”

Referring to PMU factions that are politically active, such as Asaib Ahl al-Haq, Zaidi called for “separating politics from security and not putting military arms in the hands of politicians, as this would threaten civil peace and stability.” Unlike many Shiite factions close to Iran that are politically active, Zaidi's al-Abbas Combat Division doesn't participate in the political process.

Moreover, the main political parties in the country don't have a clear, unified vision. Muqtada al-Sadr, leader of the Sairoon Alliance in Iraq's parliament, tweeted Oct. 6 that the next prime minister "should handle the ministr[ies] of Interior and Defense and all delicate security positions.”

A Badr Organization member has held the position of interior minister for many years and has long demanded that the security in the cities be handed over to the ministry. Badr reiterated its demand for the post of the Ministry of Interior on Oct. 9

A group of parliamentarians — mostly members of the Fatah Alliance, of which the Badr Organization is a vital component — on Oct. 11 started collecting signatures to allow the Interior Ministry to take charge of security and to eliminate operational commanders. These positions, established in 2006, are affiliated with the general commander of armed forces, who is also the prime minister.

In the absence of a common vision among the ruling parties on how to deal with the complex security situation in Iraq, and with the confusion regarding political and security issues, the likelihood is increasing that terrorist groups will return to control parts of the country.

“Iraq has no immunity against a major security breach that might lead to a new setback," Hisham al-Hashemi, a researcher specializing in armed groups, told Al-Monitor. "There are gaps and weaknesses in the military victory that Iraqi forces achieved, [and those shortcomings] clearly threaten liberated areas."

In addition, according to Hashemi, Iraq's forces require better technology for handling security intelligence and need to improve their overall structure.

In light of the growing violence and needed improvements to its security forces, Iraq's security situation is likely to remain unstable, and might even worsen.