How the Rouhani administration can contain excess liquidity

In the absence of genuine reforms that will allow the adoption of more prudent fiscal, monetary and foreign currency policies, the Iranian economy will remain structurally crisis-ridden. 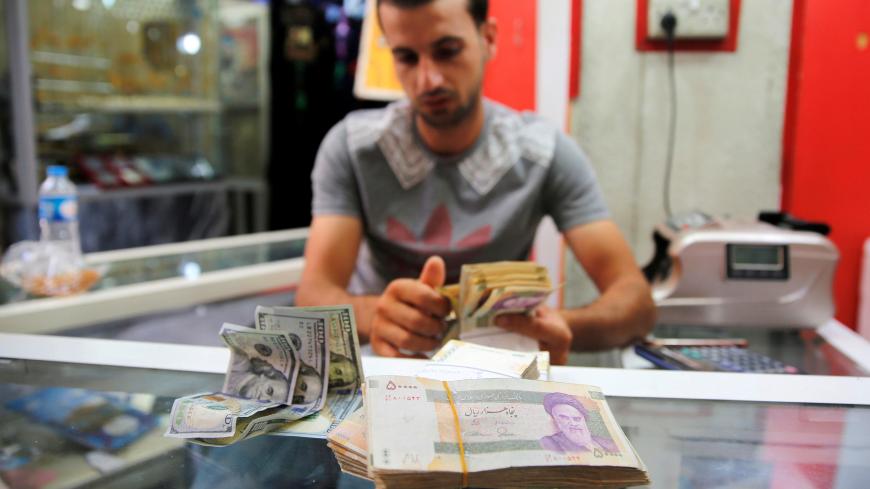 Iranian rials and US dollars are seen at a currency exchange shop in Baghdad, Iraq, Aug. 8, 2018. - REUTERS/Khalid Al-Mousily

Inflation is quickly rising in Iran on the back of a continuous and uncontrollable growth of liquidity. Two basic factors explain the ongoing slump in the economy. One is the ineffectiveness of the government's fiscal policies. The other is the monetary objectives of the Central Bank of Iran (CBI); these are frequently dictated by governments, including that of President Hassan Rouhani. As a result, the Iranian banking system has been consistently used as the main apparatus to finance the budget deficits of state bodies, whether under critical or normal circumstances.

Public finances have been routinely misallocated and squandered due to inefficiencies in fiscal policy and factors such as dysfunctional supportive policies, direct distribution of public resources among citizens and enterprises, subsidies for energy, direct government intervention in price making, low public sector efficiency, large government size and lack of budget transparency.

Indeed, the surge in government expenditures has been the key source of unbalanced budgets and structural budget deficits. The budget’s operating balance gap is alarming. It was more than 750 trillion rials ($17.8 billion) in the Iranian year ending March 20, 2017 and about 390 trillion rials ($9.2 billion) in the first four months of the current Iranian year (beginning March 21, 2018). Last year, the government spent a whopping 45% more than its revenues. Part of this differential was funded through the sale of oil; the rest is slated to be accumulated as the liabilities of the government. The gap between government resources and its expenditures combined with its respective accumulated liabilities is ultimately transmitted directly or indirectly to the country's banking system. This, in turn, accelerates liquidity growth. At present, should US sanctions be applied in this equation and oil exports as a result drop on a large scale, the administration is positioned to witness a serious shortage of resources. This shortfall will ultimately push the central bank to raise the monetary base via printing fiat money and sending the rial down against the greenback.

Troubled credit and financial institutions' attraction of depositors with unconventionally high interest rates has also helped create added liquidity. Over the past five years, due to the problems that the banking system has encountered, the interest rates on deposits rose at a greater percentage than financial institutions’ assets. As a result, many bankers were compelled to record false earnings on their books. Hence, at some point, while the monetary base did not grow much, some unlicensed credit and financial institutions’ interest rates went up rapidly, bringing in deposits and ultimately culminating in the rise in liquidity or narrow money, so to speak. That being said, narrow money increased through two channels: high interest rates paid by banks and extra short-term financing eased by the regulator itself, adding up to the already high money base and ballooning inflation. Nonetheless, the CBI’s lack of independence and the perpetual pressure on it to offset shortfalls in other sectors of the economy have also boosted the growth of this macroeconomic indicator.

Although the autonomy of the CBI is worth debating, it is vital to focus on what is realistic, such as an intermediate stage before the bank becomes independent. This could help determine the answer to the key question of whether Iran's monetary policies can carry weight beyond being mere words on a piece of paper. Then, afterward, it could be rightfully argued whether such policies carry sufficient weight or not. As there is still a large amount of financial dominance by the administration over the central bank, it is a moot point to discuss the existence of independent monetary policies under such circumstances. The CBI functions more as an agency of the central government. For this reason, unless a complete and thorough reform in the government budgeting system is undertaken, it won’t make much sense to speak of an autonomous monetary regulator.

Another issue that challenges the existence of independent monetary policies is currency policies. This is another hurdle that must be overcome, provided that the central bank is assumed to conduct its mandates properly. Of note, the CBI in Iran is not capable of playing its central role of maintaining price stability and inflation. Sadly, its duties are not as well-defined in its conventional form as other central banks in the world.

Financial reforms seem to be the first steps to take in an extra-liquidity environment. Hence, government spending cuts and a revision of ineffective subsidy policies stand to be the starting initiatives. The reform of the energy market and the liberalization of energy prices would reduce the financial burden on the government. This would hinder the loss of public resources and lower budget deficits. Also, it is necessary to replace inefficient support policies such as distribution of monthly cash handouts and guaranteed purchases of agricultural products with targeted and more clever measures.

Another important step is to reform the banking system and exert clear and concise supervision over banks. The fate of troubled banks needs to be decided swiftly and regulatory standards need to be further strengthened. Besides, effective mechanisms should be designed to reduce banks' overutilization of central bank funds. In the case of sanctions, it is important that the government, instead of putting pressure on the central bank's resources, be able to service its costs through increasing the efficiency of its financial policies and reducing its expenditures.

It is also recommended that foreign exchange policies be separated from monetary policies. In other words, oil money should not be handed over to the central bank. For this, a third entity needs to be introduced to hold such revenues. If not, history will repeat itself once again, since whenever the central bank has failed to curb the speed of liquidity growth, it has been obliged to resort to currency suppression measures to expand imports so as to deliver its inflation targets.

Failing monetary and currency policies have long been — and still are — the major causes of the crisis state of the Iranian macroeconomic environment. Consequently, concurrent reform of both budgeting and foreign exchange market management by the Rouhani administration ought to be pursued in order to put an end to the financial worries of Iranians and ultimately help bring about the independence of the central bank.