Iran maneuvers to win back public trust in the rial

While the Iranian rial has jumped 25% over the past week, there are major questions about whether the Central Bank of Iran will be able to sustain the upward momentum. 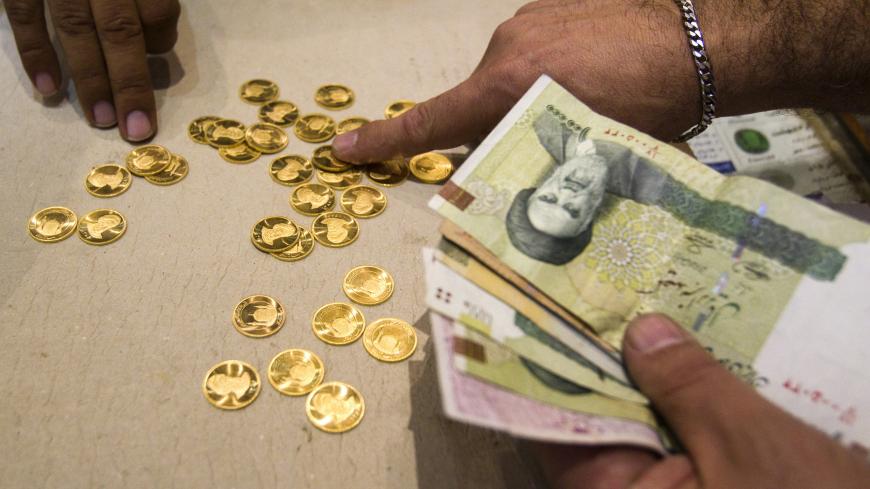 After months of a drastic and ongoing depreciation, the Iranian rial started recouping losses last week, mostly on the back of government intervention. The Central Bank of Iran (CBI) has since been largely successful in maintaining the value of the national currency, which has taken a beating due to structural problems in the economy and psychological factors relating to the US withdrawal from the Joint Comprehensive Plan of Action (JCPOA). But the question now on the minds of Iranian observers and investors alike is how sustainable the monetary regulator's policies will be, especially considering its track record of fanning the currency crisis with poor decision making.

The rial, which has lost approximately 75% of its value this year, hit a record low rate of 190,000 against the US dollar on Sept. 26, shortly after the showdown between Presidents Hassan Rouhani and Donald Trump at the United Nations. Three days later, a top state body comprised of the heads of the executive, legislative and judicial branches gave the CBI the green light to intervene in the foreign exchange market. Of note, only weeks before, recently appointed central bank chief Abdolnaser Hemmati had promised to stay away from such interventions.

Since the green light from the Supreme Council of Economic Coordination immunized the CBI from the hazards that got its top foreign exchange official arrested in early August, the regulator has started pumping serious money into the currency market, and cracked down on black market speculators. Meanwhile, in what seemed to be an orchestrated psychological operation to restore the public’s trust, almost all Iranian media outlets — whether conservative or Reformist — and a number of senior officials, including Rouhani's chief of staff, asserted that the positive trajectory of the rial is here to stay. In parallel, news emerged that the judiciary has sentenced three major economic offenders — including a man branded the "sultan of coins" — to death, sending a stern warning to black market players.

The combined effect of these factors led the rial to gain as much as 25% in two days to reach about 140,000, where it is currently hovering. Indeed, the same herd mentality that had driven people to form long queues in front of exchange shops to buy dollars only days before, prompted scores to gather again across the country, this time to prevent losses by selling hoarded hard currency. But unsurprisingly, the few that were ready to buy hard currency only did so at relatively low rates. Many on social media have accused the government of profiting off the predictable panicked response, something Rouhani has categorically denied. The president also promised that the CBI is ready to maintain for a whole year the same level of market interference it has displayed over the past week.

The central bank's efforts to prop up the rial have gone beyond direct intervention. Indeed, it has moved to allow licensed money changers to sell up to 5,000 euros to each customer at the open market rate — something that was previously banned, with the exception of designated groups of customers — and told banks to buy foreign currency as dealers refused to sell. These measures will further shrink the black market, in turn boosting CBI's supervisory capability. Furthermore, as exchange shops have been told by their own association to purchase US dollars at the 100,000-rial range and banks are buying at slightly lower rates of about 950,000 rials, it is evident at what level the government aims to stabilize the rial — at least in the short term.

Significantly, the CBI has also been given more authority to conduct open market operations and rein in unruly quasi-state firms, many of which are petrochemical exporters that have in recent months intensified the currency crisis, as reported by Al-Monitor. While the prospect of mandatory foreign currency repatriation by exporters will continue to frustrate genuine private sector players who describe it as a historically failed method, the CBI's coffers will be replenished by billions of dollars if quasi-state violators are truly dealt with. This can to a degree calm fears about Iran's reduced oil revenues as the United States ramps up pressure on buyers.

What is more, the regulator wishes to issue foreign currency bonds, an idea that was initially floated in early February but was not executed at the time. Experts believe that the initiative has the potential to thwart panicked dollar purchases and thereby further help support the rial. But that is contingent on the CBI issuing necessary guarantees, as the general public has yet to fully regain its trust in the banking system after banks accepted foreign currency deposits a few years ago only to pay interest in rials calculated at the much lower official rate.

Another factor that has contributed to rising expectations of the rial's comeback is the prospect of Iran joining the UN Terrorist Financing Convention, which has grown more likely with parliament’s Oct. 7 ratification of a bill to counter financing of terrorism, in a major blow to hard-liners' vigorous opposition. The legislation, which is now being reviewed by the Guardian Council, is the last of four highly contested bills pursued by the Rouhani administration in order to comply with the action plan set out by the Financial Action Task Force for the Islamic Republic to exit its black list. Of note, the task force's latest statement signaled that it is Iran's last chance to pass legislation required to comply with anti-money laundering and terror financing guidelines, so the stakes have never been higher. Should Iran fail to adhere to the action plan this month, it is widely believed that its embattled banking system will be even more isolated, further straining trade ties.

Lastly, positive news coming out of Europe has increased the prospects of the rial strengthening. Indeed, the European Union’s apparent effort to operationalize a long-awaited special-purpose vehicle prior to November, when a second round of US sanctions are due to come into effect, has been received as a highly positive development, even as it remains to be seen to what extent it can sustain trade and investment in Iran.

Meanwhile, as CBI head Hemmati has noted, the Nov. 5 implementation of further US sanctions is not expected to massively impact Iran's economy since market actors have already largely prepared themselves for the restrictions.

As such, if the Rouhani administration finally shows the Iranian public that it means businesse and that it has learned from past mistakes — all while maintaining a constructive relationship with the EU and other parties to the JCPOA in order to keep the nuclear deal alive — it still has a fighting chance at establishing a degree of stability to the rial and the economy at large for the foreseeable future.