Will Iran drive its musicians off the streets?

The Iranian authorities are considering to permits for street performers, but musicians say it goes against the very spontaneous nature of their work. 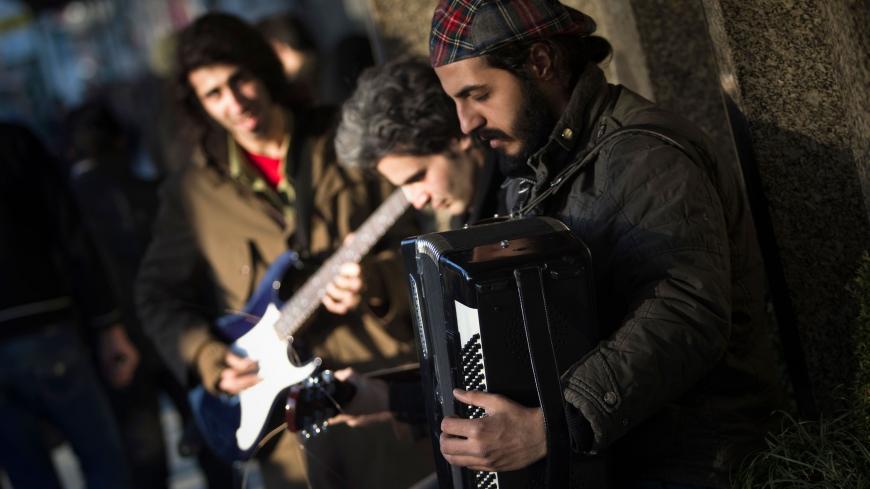 Aso Kohzadi, a violinist with a master’s degree in electronic music from the Netherlands, regularly performs well-known classical tunes and her own compositions in the streets of Tehran.

Kohzadi is often accompanied by her partner Mehrdad Mehdi, who plays the accordion and who was one of the very first street musicians in the Iranian capital. Although Kohzadi has performed in cafes and concert halls, the academically trained classical musician says she loves playing in the streets and “bringing a smile to the faces of passersby,” particularly those who do not usually go to concerts.

Yet her impromptu street performances may have come to an end.

Iranian officials and members of parliament have recently signaled that street musicians may soon be legally required to obtain permits if they wish to perform in public places, or else they would face repercussions. The move has yet to be finalized and its scope remains unclear, but ever since musicians learned about this at the end of summer they fear the worst.

News of such a plan was first publicized by Sadeq Tabatabaei Nejad, a cleric and senior member of the parliamentary Committee on Culture, in early August. He said high-ranking officials at the Ministry of Intelligence, Ministry of Culture and Islamic Guidance, parliament, Tehran municipality and law enforcement have convened to discuss details on how to handle street performances.

Several local papers reported that the meeting was held at the behest of the Ministry of Intelligence that had referred to street music as a cause of "dancing, moves outside the norm and inciting people toward countersecurity behavior.” This has not been the first time that performing music in public places garnered attention in recent months, since only days before a signpost was installed at the entrance of the busy Jamshidieh Park in Tehran, warning visitors not to bring in "musical instruments and animals.” After an immediate public backlash, the sign was taken down in a matter of days.

On Oct. 11, Tehran Police Chief Brig. Gen. Hossein Rahimi said all street musicians must obtain permits from "Ershad,” as the Culture Ministry is known, and "Amaken," a division of the police force supervising public places. Although there have been no reports of new legislation or regulations on street musicians, Rahimi claimed that the police has already started cracking down on offenders.

"In my opinion, musicians shouldn't give in to [possible requests for] getting permits. I am completely against the idea of requiring permits for street performers,” Kohzadi said, expressing concern that this would mean forcing some of the performers off the streets and destroying the variety of music available on the sidewalks.

Unlike Kohzadi who has a music career besides the street performances, many street musicians depend on their performances out in the open and the money given to them by passersby.

"Requiring permits from street musicians will cut off their only source of income," Kohzadi noted.

Particularly for music students who take to the sidewalks to earn their tuition fees or get some public recognition for their work as they try to launch their music careers, it would be extremely unlikely, if not impossible, to get a permit. The process of obtaining a permit from Ershad is lengthy. If musicians also have to deal with Amaken the process could become rather discouraging.

This would hardly be the case for most street performers, such as Arshan Haghi, a 35-year-old saxophonist whose performances are often interrupted by warnings from members of the municipality, Ershad, Amaken and the Basij, a volunteer force of Islamic government loyalists to pack up his things and go elsewhere.

Haghi said the first time he played on the street was outside the iconic Farhang Cinema in Tehran when he was still in high school. But it has been about nine years since he started playing outdoors "to propagate a culture of street performances.”

"Once I was arrested," he said. "It was the first and only time in my life that I was actually handcuffed and detained."

He believes that if implemented, the permit scheme would be a way for the authorities to wield more influence over street music, which is no longer within their control due to its popularity in recent years. Haghi said the money artists would have to pay the authorities for the permits may be another reason for the new measure.

Violinist Pooya Eshghinejad mostly plays on the streets to gain experience. Just like Kohzadi, he performs in licensed shows at the Ministry of Interior Auditorium and other places. He also partly does it for the money, though what he gets is negligible: around 400,000 rials ($10) on average a day.

"Wonderful people from different walks of life come to listen and it is really interesting to see the different types of people in the audience [on the streets]," he told Al-Monitor.

Eshghinejad said that the police have not cracked down on street musicians in particular in the past few months as Tehran's police chief claimed recently, leading him to believe that the announcement of the permits is only a warning call to say "We are watching you.”

He also believes that even if implemented, the initiative would fail since permits and the procedure to obtain them run counter to the very spontaneous nature of street performances.

Both Kohzadi and Eshghinejad believe that musical freedoms have indeed increased in recent years with more musicians present on the streets. But they do not think the concessions by the authorities are necessarily the reason.

"Street music has found its place among the new generation and there is no real reason to combat it," Eshghinejad said. "It has become normal for people as something that is just there.”