Intel: How the US is going after Hezbollah’s finances 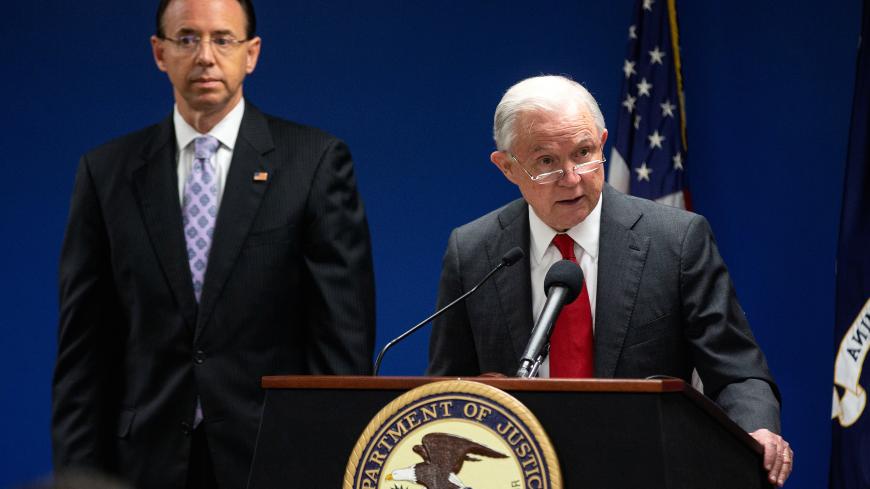 US Attorney General Jeff Sessions speaks alongside Deputy Attorney General Rod Rosenstein during a news conference to announce efforts to reduce transnational crime, at the US District Attorney's office, in Washington, US, Oct. 15, 2018. - REUTERS/Al Drago

Why it matters: Hezbollah may seem like the odd man out in a list of gangs that are predominantly active in Latin America, but the Lebanese organization does its own fair share of trafficking and money laundering throughout South and Central America. The new task force is an effort to tighten the screws on Hezbollah’s foreign funding streams as the Trump administration seeks to ratchet up the pressure on Iran and its proxies.

“The team is composed of experienced international narcotics trafficking, terrorism, organized crime and money laundering prosecutors who are tasked with investigating individuals and networks providing support to Hezbollah,” Sessions said in remarks to federal prosecutors today.

The task force is staffed with members of the Hezbollah Financing and Narcoterrorism Team, which Sessions created earlier this year. Federal prosecutor Ilan Graff, who is currently prosecuting two alleged members of Hezbollah’s External Security Organization, has been chosen to lead the task force.

What’s next: Sessions has given the task force 90 days to craft a strategy to prosecute Hezbollah for its activities abroad. His announcement comes after Congress passed the Hezbollah International Financing Prevention Amendments Act last week to block the assets of anyone the president determines “provides significant financial, material or technological support” to Hezbollah and its affiliates. The bill, which now awaits Trump’s signature, amends a 2015 law requiring the president to outline “procedures for designating Hezbollah as a significant transnational criminal organization.”

Know more: Stay plugged in to Al-Monitor’s Washington Pulse for the latest on the Trump administration’s efforts to crack down on Iran and its proxies. For more insight into the Hezbollah International Financing Prevention Amendments Act, read congressional correspondent Bryant Harris’ granular breakdown of the bill.