Despite attempts by Israel to turn Gazans against Hamas, they appear unwilling to opt for another party or authority to control the Gaza Strip. 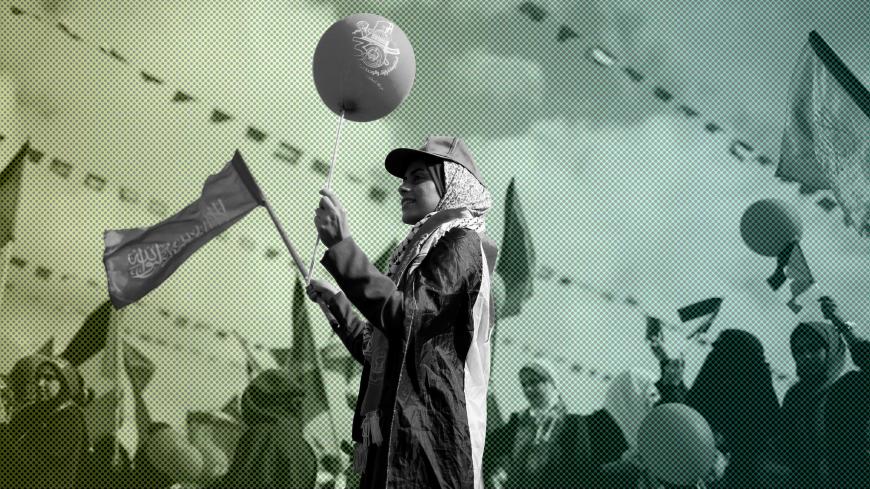 The already poor living conditions in the Gaza Strip have been steadily deteriorating in recent months. Sanctions by the Palestinian Authority (PA), and its failure to achieve reconciliation with Hamas and lift the Israeli siege, have significantly worsened the situation.

According to a World Bank report issued Sept. 25, "The economy in Gaza is collapsing, suffering from a decade-long blockade and a recent drying up of liquidity." It said, "The result is an alarming situation with every second person living in poverty and the unemployment rate for its overwhelmingly young population at over 70 percent." Total unemployment in Gaza stands at 53%.

In recent months, the prices of goods and services in the Gaza Strip increased, wages decreased, purchasing power declined, economic growth shrank and cash flows dropped. This has weakened trade activity, causing a sharp decline in the population's income.

On June 27, the Palestinian Central Bureau of Statistics (PCBS) published its estimates for national accounts for the first quarter of 2018, revealing gross domestic product (GDP) in the Gaza Strip of $813.5 million, a decline of 6% compared with the same period in 2017. GDP per capita for the first quarter of 2018 stood at $425.30, a decrease of 8.9% from the previous quarter.

Israeli Defense Minister Avigdor Liberman has long called on Gazans to protest against Hamas and “create an Arab Spring in the Gaza Strip,” claiming that Gazans no longer support the movement as much as they used to.

Hazem Qassem, Hamas' spokesman in Gaza, told Al-Monitor, “It is clear that Gaza is going through a humanitarian crisis as a result of the Israeli siege and the PA's sanctions. The people are aware of the parties inflicting this crisis on them and this is why they are organizing the [weekly] marches of return. They are expressing unprecedented anger toward Palestinian President Mahmoud Abbas.”

Qassem added, “Meanwhile, Hamas and its cadres are suffering under the same crisis as the residents. Gazans can't protest against Hamas because they are well-aware that it supports them and is enduring just as much. The people realize that Hamas stands beside them against those besieging them and that it is taking to the streets alongside them. The Israeli occupation’s attempts to pressure Palestinians to protest against Hamas are actually furthering their support for the movement.”

Since the beginning of 2018, a series of demonstrations have taken place in the Gaza Strip in protest against the Israeli siege, at the same time demanding that the PA alleviate the suffering and lift sanctions. A march was organized in January in Jabaliya refugee camp for those specific purposes.

On Sept. 4, dozens of Palestinians demonstrated outside the UN headquarters in Gaza City, protesting the US decision to reduce its funding to the United Nations Relief and Works Agency for Palestine Refugees in the Near East.

Other demonstrations protesting the poor state of Palestinians were held in February, March and May. No explicit calls to overthrow Hamas were made during the protests, although Gazans believe all the Palestinian political circles, including Hamas, are responsible for the crisis they are enduring.

A Palestinian official close to Abbas told Al-Monitor on condition of anonymity that “ending Hamas’ control over Gaza and bringing the PA back should never happen with the help of the Israelis."

Fatah doesn't accept that, he said, referring to Abbas' political party in the West Bank and Hamas' rival. "It all depends on the Gazan public's ability to force Hamas out." He believes the Palestinian people must pressure Hamas. "Hamas must feel that there is a popular desire to end its control over Gaza," he added.

On May 13, Jason Greenblatt, the US administration's Middle East envoy, told Israel Hayom news that the tragic situation in Gaza is Hamas’ responsibility, because Israel, the PA and the international community cannot provide the necessary assistance to Gaza as long as Hamas is in control.

It is important to recognize that Israeli and US calls for the Palestinians to protest against Hamas are neither random nor negligible statements. Perhaps they are part of the Israeli government’s approach to demolish Gaza from within without any Israeli losses.

Iyad al-Bozm, spokesman for the Ministry of Interior in Gaza, told Al-Monitor, "The people know which party is imposing a siege and this is why they are organizing the marches of return. We can rest assured that the security situation in Gaza is stable. All Israeli attempts to incite the people have failed. We have not seen any impact on the Palestinian public opinion. We have no problem if the people want to protest and voice their demands, as long as it is without sabotage or security chaos.”

By comparison, Fatah would have received the votes of 30.5% of West Bank respondents and 34.2% of the Gazans polled.

Yet, the latest poll conducted by the Palestinian Center for Policy and Survey Research in Ramallah in September showed that 43% of Palestinians blamed the PA for the poor situation in Gaza, while significantly fewer — 24% — blamed Hamas.

Emad Abu Awad, a Palestinian researcher focusing on Israeli affairs at the Vision Center for Political Development, told Al-Monitor, “Israel prefers to exhaust Hamas in Gaza by widening the gap between the movement and the Palestinian people, before any military confrontation takes place. This is why Israel exerts more pressure on the Palestinians and accuses Hamas of being the cause of all of their suffering. Meanwhile, there are serious Israeli fears of the spillover of any security incidents against Hamas in Gaza on Israel, since the movement holds Israel responsible for the siege.”

Palestinians know that if they take to the streets and protest against Hamas, the movement could impose harsh security measures, fearing that local and regional forces would seize the moment and take what's left of its authority in the Gaza Strip. At the same time, the movement allows popular protests in Gaza against the Israeli siege and the PA's sanctions.

Perhaps another reason why Palestinians aren't so quick to demonstrate against Hamas is because they understand that the alternative might not be better. Gazans do not want the PA to take over, given its tight security control over citizens in the West Bank and how it allows Israel to violate its sovereignty there. Without Hamas, Gazans fear, they would lose all sense of safety. No matter how much they might criticize it, they accept Hamas’ control of the Gaza Strip.