Will Egypt opt for controversial steps to fight tax evasion?

Economists in Egypt are condemning statements by the head of the Egyptian Tax Authority, whereby the Ministry of Finance might be granted access to the bank accounts of some customers and companies in a bid to reduce tax evasion. 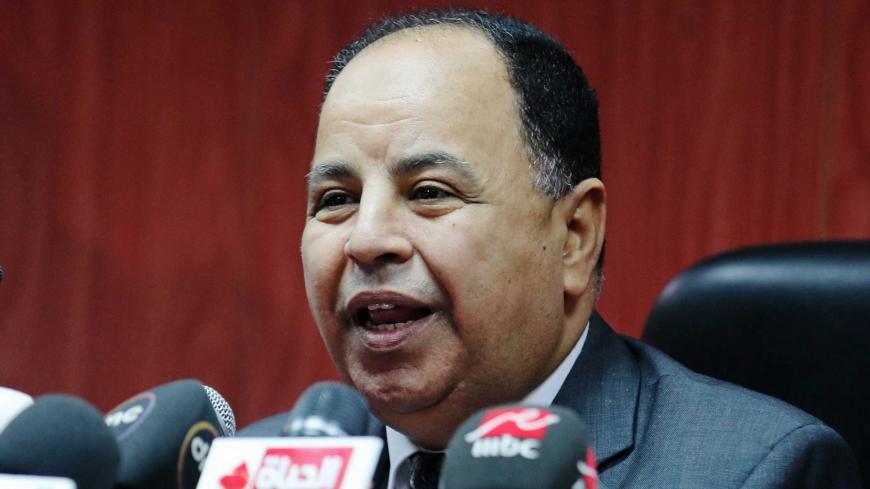 CAIRO — Passant Fahmy, a member of Egypt's parliamentary Committee on Economic Affairs, submitted a briefing request Oct. 3 to parliament Speaker Ali Abdel Aal in order for him to submit it to Finance Minister Mohamed Maait.

The request seeks to inquire about the statements made by Emad Sami, the head of the Egyptian Tax Authority (ETA), regarding the intention to amend the Income Tax Act allowing the Ministry of Finance access to some bank accounts.

Sami had told Reuters Aug. 26, “The ETA has proposed amending Article 99 of the Income Tax Act, allowing the Ministry of Finance to access people’s bank accounts in a way that does not violate the law governing the Central Bank of Egypt [CBE].”

He noted that the goal behind this amendment is to reduce tax evasion. "We will not ask to have access to each and every account there is. We will only ask for access to the accounts of those providing unrealistic data in order to compare such data with their bank accounts," Sami said. He said that the amendment would commit all parties to allow tax officers access to such bank accounts provided they have the approval of the minister of finance.

Tarek Amer, the governor of the CBE, told Youm7 newspaper on the same day that the bank would not allow, under any circumstances, the ETA to access bank accounts belonging to customers who owe taxes to the ETA. Financial privacy is an inherent right of the CBE.

Amer stressed that the CBE will continue to adhere to the Bank Secrecy Law.

As soon as Sami’s statements were published, a crisis broke out within the government, prompting the authorities to declare its respect for financial privacy in a bid to offset potential negative repercussions and prevent customers from withdrawing their bank deposits for fear of additional taxes.

Since the floating of the Egyptian pound on Nov. 3, 2016, the CBE has been keen to attract customers by issuing investment certificates with a yield of up to 20%.

Maait called into the DMC TV channel Aug. 27 denying any changes or amendments that would undermine the bank secrecy. He said that the Income Tax Act deals with cases of tax evasion through well-defined mechanisms.

On July 17, the Ministry of Finance announced that it had started collecting a real estate tax, and that those who did not pay the tax on time would face fines and administrative measures forcing them to pay the taxes. This worried Egyptian citizens as they expected such a measure to affect investments and the real estate market.

Parliament had previously received from several prominent parliamentarians of the Support Egypt coalition, which is the majority coalition in the parliament, requests to grant access to some bank accounts to avoid tax evasion. This further proves the government’s desire to oversee some customers’ bank accounts, savings and deposits. It also shows that the government’s statements regarding its respect for the bank secrecy were only issued to quell public concerns.

Member of parliament Mervat Alexan had said on Oct. 19, 2016, that she would “submit a bill to amend the Bank Secrecy Law because there is a serious problem plaguing the law that prevents tax officers from accessing bank accounts. [An amendment] would contribute to reducing tax evasion.”

Alexan is a member of the Support Egypt coalition, which is a permanent defender of the policies issued by the government and President Abdel Fattah al-Sisi. She stressed that the amendment of the law would not negatively affect investments.

The parliament never discussed her bill due to the decision to float the Egyptian pound and the subsequent laws that were issued, such as the Value-Added Tax Law, among others.

Article 97 of the law governing the CBE and the banking system stipulates, “All bank accounts, deposits, trusts and safes of customers, as well as their related dealings, shall be kept secret. Having access to or giving particulars about these accounts directly or indirectly shall be prohibited, except by written permission from the owner of the account, deposit, trust or safe, any of his/her heirs or any legatee of all or part of these funds, or from the legal representative or the proxy delegated in this regard or on the basis of a judicial ruling or an arbitration award.”

Ashraf al-Arabi, a member of the parliamentary Economic Committee and former head of the ETA, told Al-Monitor that the government is not allowed to access the accounts of customers or companies.

“No law in the world allows the minister of finance to have access to the accounts of bank customers,” he said.

He added, “The timing of this governmental announcement raises many questions, especially considering that there is an ongoing debate about the real estate tax. This alludes to the fact that the government might be trying to impose a tax on capital in order to implement its economic reform plan and reduce the public debt and the budget deficit through increased tax revenues. However, such an orientation would have disastrous implications on the national economy.”

Ever since it floated the Egyptian pound in order to revive the economy, Egypt’s government has been implementing economic reforms. It has upped the energy and drug prices and passed new investment and civil service laws as well as income tax law amendments. It also imposed taxes on cellphones, cigarettes and tobacco, and passed the Value-Added Tax Law.

Haitham al-Hariri, a member of the 25-30 opposition bloc, told Al-Monitor that Sami's statements have negatively affected citizens’ confidence in banks, which is why the CBE governor rushed to attack him. This, he said, reflects confusion within the state organs.

“The points discussed among state institutions should not be announced to the public unless finally agreed upon,” he said. “The bloc refuses to grant the Ministry of Finance the right to have access to certain accounts. If this proposal passes, it would only apply to the middle class and the poor, and not to businessmen and influential people."

Fahmy told Al-Monitor that she will ask the finance minister to dismiss Sami to prove that the government is not looking to monitor bank accounts and subsequently impose a tax on capital.