NASA scientist Serkan Golge, in jail on coup-plot charges, lost an initial appeal to a Turkish court. His wife believes he is a captive in Ankara’s feud with Washington, which has flexed diplomatic and economic muscle to free another jailed American. 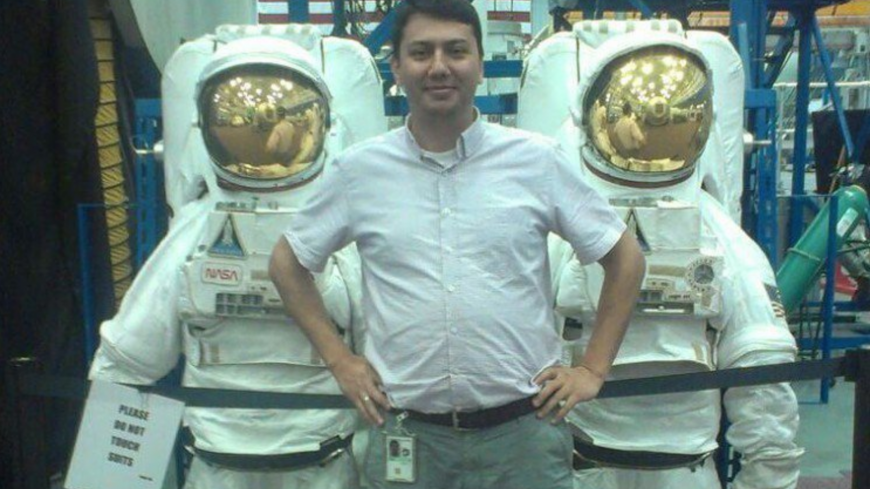 A Turkish court on Wednesday reduced the prison sentence of an American physicist convicted on terrorism charges but refused to free him in a case that has drawn far less attention than that of the jailed American pastor in Turkey.

Serkan Golge, a 38-year-old former NASA scientist, was sentenced in February to 7 1/2 years in prison on charges he belonged to an outlawed group accused of staging a bungled military coup in Turkey in 2016. He appealed the verdict to a provincial court in the southern city of Adana.

The Adana court trimmed his sentence to five years and overturned the conviction for membership in a terrorist organization, ruling instead that Golge had aided the group, his lawyer, Ali Bilgin, told Al-Monitor. Golge rejects both charges and will now appeal to a higher court in a process that could take years.

There was no immediate US response to Wednesday’s ruling against Golge. In February, the State Department said his conviction was “without credible evidence” and it would follow the case closely.

Golge’s case has been overshadowed by the plight of another American prisoner, Andrew Brunson, an evangelical preacher held on coup-related charges for nearly two years. President Donald Trump has threatened Turkey with sanctions if Brunson is not released but has failed to publicly demand that other Americans, like Golge or the two Turkish consular workers who are also in jail, be freed.

“I would expect Trump to at least call for all American citizens to be released,” Golge’s wife, Kubra Golge, said in an interview before the court ruling. “Is it because we received [citizenship] through green cards? Is it because we’re Muslims? Brunson is probably innocent, too, but does one need to be a clergyman to be taken seriously?”

Before winding up in a Turkish prison, Golge was a senior research scientist at NASA’s Johnson Space Center in Houston, probing the effects of space radiation on astronauts for the agency’s first manned mission to Mars.

He had traveled with his wife and two sons to visit family in his southern Turkish hometown when he was detained a week after the coup attempt, ensnared in a massive dragnet that has imprisoned more than 50,000 people. The failed putsch is blamed on followers of Fethullah Gulen, a Muslim preacher in self-imposed exile in Pennsylvania who denies masterminding the plot.

“My husband was arrested because he was American. He is a hostage,” Kubra said. Neither she nor her husband are adherents of the Gulen movement, she said.

An estranged relative by marriage testified against Golge in what Kubra believes was retaliation over an inheritance dispute. The indictment cited Golge’s savings account at a Gulen-affiliated bank and a $1 bill in the house where he was staying as evidence of his guilt. Turkish authorities claim that single dollar bills serve as a kind of calling card among Gulen’s followers.

“We believe it is a mistake not to release Serkan Golge, and the ruling surprised us," Bilgin said. "For someone who does not have a previous criminal [record], who has already spent more than two years in prison, it is unjust to keep him behind bars.”

Golge and Brunson are among a small number of Americans who remain in Turkish custody, although US officials do not provide an exact number. Dozens were detained or deported for alleged connections to the Gulen movement after the coup attempt, and the State Department urges Americans to reconsider visiting Turkey since they can be detained “on scant or secret evidence and grounds that appear to be politically motivated.”

It’s a dramatic example of how US-Turkish relations have soured. A raft of disputes divides the NATO partners, from delays in US weapons shipments to the jailing of a Turkish banking executive in the United States in a scheme to evade sanctions on Iran. But Brunson’s prolonged detention without conviction is the flashpoint.

Trump lashed out at Turkey in July after a court moved Brunson, whom he described as “a great Christian,” to house arrest, rather than freeing him outright. Trump later accused Turkish President Recep Tayyip Erdogan of reneging on a deal to let Brunson go in exchange for his help in persuading Israel to free a Turkish woman accused of smuggling money to Hamas.

Trump’s threat of onerous sanctions sparked panic among investors, already worried that soaring inflation, crushing debt and Erdogan’s unconventional ideas about monetary policy might crash the $800 billion economy. The ensuing sell-off has seen the lira lose more than a quarter of its value, and a severe economic downturn looms. Erdogan has framed the financial crisis as American “economic warfare.”

“When the Trump administration decided to shift to a ‘get tough’ policy, it did so very publicly and in a very personalized way that appeared to be an attack on Erdogan and the very stability of Turkey,” said Howard Eissenstat, a professor at St. Lawrence University and senior nonresident fellow at the Project on Middle East Democracy.

"I shudder every time an administration official talks about Brunson as a ‘good Christian,’ rather than an ‘unjustly detained US citizen.’ It undermines the US strategically and efforts to get all the US citizens and foreign service nationals — including Brunson — released,” he told Al-Monitor. “The US has been a sometimes diffident advocate for dual nationals like Golge.”

Beyond the White House, US officials insist they are focused on all Americans held in Turkey. Secretary of State Mike Pompeo has called for their return, and the Senate has proposed a bill that would restrict loans from international financial institutions to Turkey while US citizens and local consular employees are in custody.

The US Embassy’s charge d'affaires, Jeff Hovenier, who is Washington’s top diplomat in Turkey until a new ambassador is confirmed, attended Golge’s trial on Wednesday.

Kubra said Golge’s work with NASA has helped attract some interest in his predicament. But NASA dismissed Golge soon after his conviction, compelled to replace him on the team researching interplanetary travel, she said. Unable to afford their mortgage, the family sold their house in Houston. Once a month, she and the two sons, aged 8 and 1 1/2 years, travel to the prison to see their father for an open visit.

“It is always melancholic. Sometimes Serkan cries when he sees the children,” she said. “What wounds me most is that trauma will haunt my children. My older son says, ‘Let’s please go to America, where we were happy and my father was with us.'"