Intel: Why Trump is putting OPEC on notice

In a speech at the 73rd session of the UN General Assembly, US President Donald Trump assailed OPEC for "ripping off the rest of the world" — seeking lower oil prices before the crucial 2018 mid-term elections. 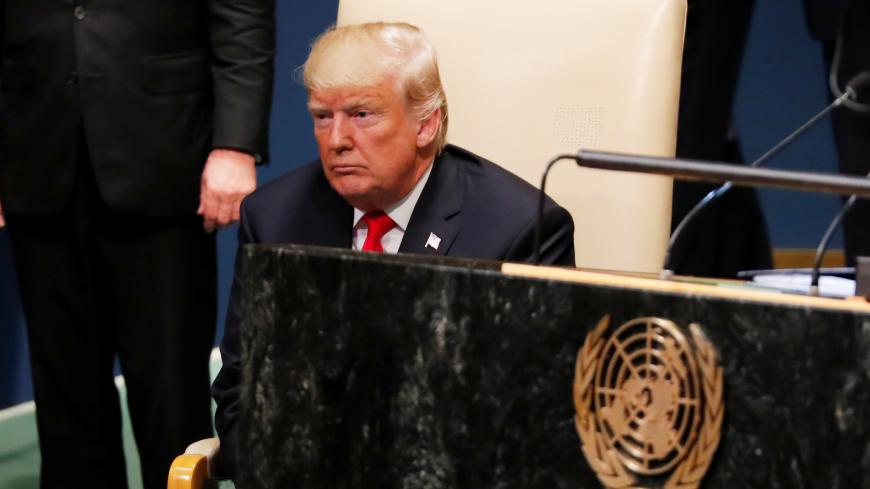 US President Donald Trump is seated after addressing the 73rd session of the United Nations General Assembly at UN headquarters in New York, US, Sept. 25, 2018. - REUTERS/Carlos Barria

In addition to ripping US foes such as Iran and Venezuela, President Donald Trump took direct aim at America's Gulf allies during his speech at the UN General Assembly meeting today. With oil prices hitting a four-year high of $82 per barrel, the US leader slammed the OPEC oil cartel after Saudi Arabia and Russia rejected calls to increase production amid looming US sanctions on Iran's oil exports.

"OPEC — and OPEC nations — are, as usual, ripping off the rest of the world."

Without naming them, Trump went on to demand that the Arab Gulf states pay for US military protection — the same case he's made with Europe and NATO. US support, however, is largely aimed at containing Iran, raising questions about America's leverage.

“We defend many of these nations for nothing. And then they take advantage of us by giving us high oil prices. We want them to stop raising prices, and we want them to start lowering prices. And they must contribute substantially to military protection from now on.”

Why it matters: The increase in oil prices risks hurting the US economy, a bright spot on Trump's record, just ahead of the crucial 2018 mid-term elections. And they're partly a self-inflicted injury: The administration's decision to pull out of the nuclear deal with Iran and reimpose sanctions on the country's oil exports starting in November has caused Iranian oil production to tumble, with follow-on effects on market prices. A long-term price increase could encourage other countries to defy US sanctions while weakening the administration's resolve to go after violators.

It's not just Trump: Congress is weighing legislation to allow lawsuits against OPEC members for manipulating market prices. In a sign of how seriously Saudi Arabia takes the threat, Riyadh has hired Republican super-lawyer Ted Olson, a former solicitor general, to fight the bipartisan bill, as Al-Monitor reported earlier this month.

Chinks in the armor: Iran and the other parties to the nuclear deal are watching closely for any hint of a backlash against the Trump administration's sanctions push. European Union foreign policy chief Federica Mogherini announced last night that the EU has begun work on a financial “special purpose vehicle” to allow European firms to continue to do business with Iran, in accordance with the nuclear deal.

What now: Trump's OPEC attack caused an audible stir in the UN hall. It remains unclear, however, if the US administration and the Gulf states will take Trump seriously or if his comments were simply part of a populist appeal to US sovereignty with little real outcome.