Hamas is promoting a plan to truck UNRWA students to the border with Israel to study in tents in protest of the refugee relief agency's reduced services to Palestinians. 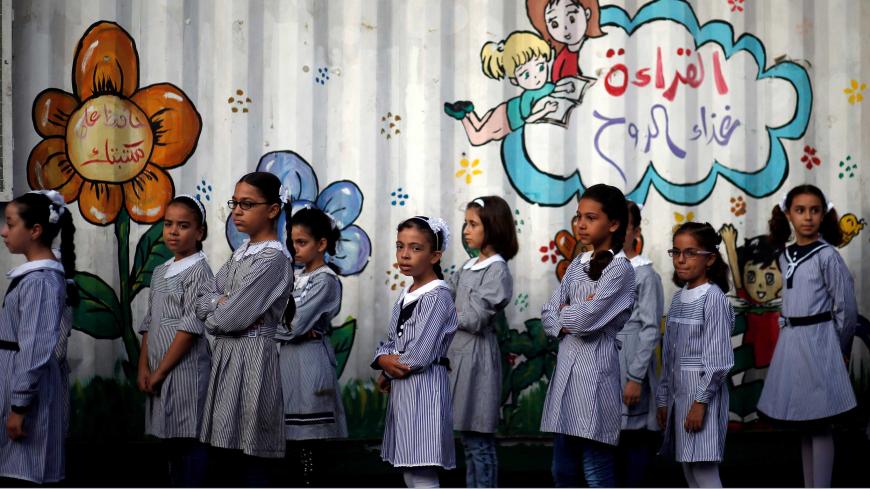 Palestinian schoolgirls queue at an UNRWA-run school on the first day of a new school year, in Gaza City, Gaza, Aug. 29, 2018. - REUTERS/Mohammed Salem

GAZA CITY, Gaza Strip — A wave of criticism has followed the recent remarks of Hamas political bureau member Suhail al-Hindi. Hindi told Felesteen newspaper Sept. 18 that there is a plan to bring the students in UNRWA schools in the Gaza Strip to the eastern border with Israel. Critics say Hamas seeks to achieve political objectives by risking children’s lives. Hindi stated that the goal is to force the UNRWA to halt the decline in the provision of basic services to Palestinians, saying, “The UNRWA administration, the occupation and whoever is besieging Gaza shall be blamed for how the tides turn.”

According to the Euro-Mediterranean Human Rights Monitor, the UNRWA terminated 100 staff members in the health and education sectors, notified 97 engineers that their contacts were downgraded to day labor and sent 105 teachers into forced retirement though their contracts have not expired. It also suspended financial allocations for services and workshops.

Speaking to Al-Monitor, Abdel Rahim Shaldan, a father of two UNRWA students in the central Gaza Strip, noted, “Hamas seems to have failed to achieve the political goal of breaking the siege, six months following the March of Return which resulted in thousands of wounded and martyrs. It has decided to risk the children’s lives.” He believes that Hamas does not have the right to risk the lives and safety of the students.

He went on. “Hindi spoke of the UNRWA schools where education is offered to refugee children from the first to the ninth grades, between six and 14 years old. This would mean that he wants to involve them in a battle they did not choose and have them walk toward bullets and bombs!”

Hindi told Al-Monitor that a national leader whose name and political affiliation he did not give had put forward the idea of taking 250,000 UNRWA students from throughout the Gaza Strip to the eastern border to study outside in the open air. He added that the Higher National Commission of Great March of Return and Breaking of Siege liked the idea.

“There is political objective behind the UNRWA cutting essential services, although made under a financial pretext," he said: force the Palestinians to repudiate the resistance in Gaza and renounce Hamas. "The Israeli occupation that has been besieging the Gaza Strip for 13 years also shares the same goal.” Hindi pointed out that wide participation in the March of Return is a clear signal that Palestinians embrace the resistance, and the students studying at the border could be another.

He said, “All those affected by the UNRWA's reduced services are expected to join. … It comes in protest to the way the UNRWA is managing its financial crisis.”

Hindi went on, “This step will lead the world to pressure the occupation to lift the siege on Gaza, and the UNRWA to halt the reduction in services.”

Um Zein Eddine Ammar, whose children study at the UNRWA schools, welcomed the idea of them attending class in a tent near the Gazan border for the sake of breaking the siege and halting the UNRWA services cuts — provided that the students are protected from the Israeli soldiers’ bullets and bombs, she told Al-Monitor.

“I have never missed a march of return so far, and I am in favor of another type of participation. We have a noble objective,” she pointed out.

Abu Abdallah Harazin of the Higher National Commission of Great March of Return and Breaking of Siege told Al-Monitor that it is too early to speak of the implementation of the plan to move the students to the border, particularly since the UNRWA has not halted its operations in Gaza, despite ongoing cuts. He said that no steps will be taken unless the UNRWA stops operating entirely in Gaza. Harazin explained that raising the issue at this moment is only designed to warn the UNRWA about how dangerous the situation would become if it stopped rendering services to refugees.

He said, “If the UNRWA services halt, the occupation will necessarily have to assume full responsibly for the Gaza Strip, considering itself as an occupier and the Gaza Strip to be occupied and besieged territory.”

Harazin explained that the Palestinian factions represented in the commission have welcomed the idea and are exploring it, and that no measures will be taken unless the participators’ safety in ensured.