Morocco plays Iran card to get US support on Western Sahara

Morocco is alleging ties between Hezbollah and the Polisario Front to secure the Donald Trump administration’s support for its territorial claims on the disputed region. 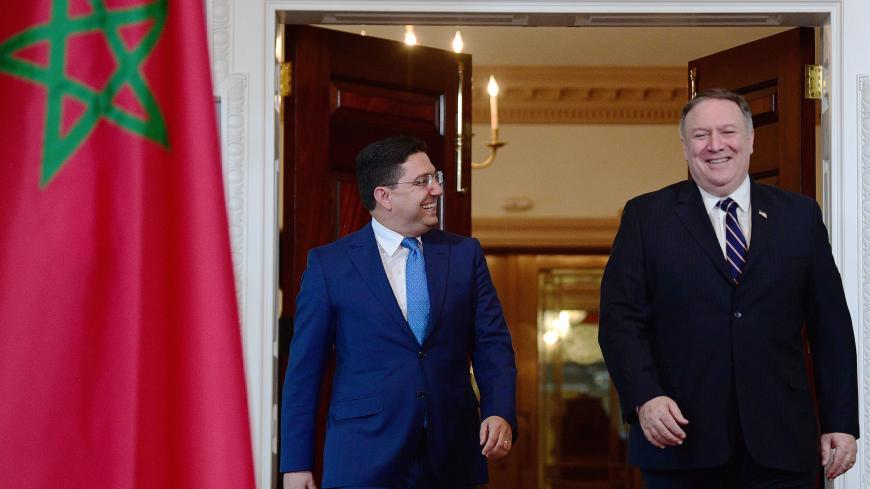 Morocco is taking advantage of the Donald Trump administration's hawkish stance on Iran to press its claims on the disputed Western Sahara.

Ahead of his visit to Washington this week, Foreign Minister Nasser Bourita indicated in a Breitbart News interview that he would bring up allegations of links between Hezbollah and the Sahrawi independence movement. Rabat is hoping to solidify US support for its position on the resource-rich Moroccan-occupied territory.

The Moroccan Embassy in Washington told Al-Monitor that Monday's meeting with Secretary of State Mike Pompeo — Bourita's first since the May diplomatic break with Iran — was a yearly event with no specific asks or deliverables expected. A brief State Department readout of their meeting, however, mentioned “shared efforts to end Iran’s support for terrorism and counter its malign influence in the region” as the only specific agenda item.

Morocco severed diplomatic ties with Iran in May, accusing Tehran and its Lebanese proxy of providing arms and training to the pro-independence Polisario Front. Soon after, Bourita accused Hezbollah of providing the Polisario with advanced surface-to-air missile systems in an interview with Fox News.

Iran, Hezbollah and the Polisario flatly reject the claims. Mouloud Said, the Polisario’s envoy to Washington, said in an interview Monday that Rabat “came up with this fabrication” to benefit from the US withdrawal from the Iran nuclear deal and please its Sunni Gulf allies, including Saudi Arabia.

Bourita also accuses the Lebanese paramilitary group of setting up a solidarity committee with the Polisario in 2016. Neither the State Department’s counterterrorism report for that year, the most recent one available, nor a July report on Western Sahara from the UN Secretary-General mention any ties between the two groups. The State Department directed Al-Monitor to the Moroccan government when asked to corroborate the latest allegations.

The spike in outreach to far-right pro-Israel media favored by Trump and his inner circle, however, suggest a deliberate influence strategy.

In May, Glick penned an article for Breitbart calling on the United States to “support Morocco against Iran” and detailing Moroccan allegations that the cultural attaché at the Iranian Embassy in Algiers directed a Hezbollah delegation for a visit to Polisario training camps in Tindouf, Algeria, in 2016. In her most recent report, she writes that the Moroccans gave her a document purporting to prove the “vast contacts that have ensued between Hezbollah and Polisario Front commanders in Beirut and in Algeria” since then. The Moroccan Embassy did not have the document immediately available and Al-Monitor could not independently review its claims.

The outreach appears to be paying dividends. Shortly after the Rabat first made its claims about Hezbollah-Polisario in May, both the House and Senate requested and received classified intelligence briefings on the issue.

Correction: Because of an editing error, a previous version of this article said Washington supports an independence referendum in the Western Sahara. Since 2007 the United States has supported an autonomy plan put forward by Morocco as a potential avenue for self-determination for the Sahrawi people.