Hamas wants to resume mass demonstrations along Israel's border to attract international attention to Gaza, but doing so threatens to unleash harsh Israeli and Egyptian reprisals. 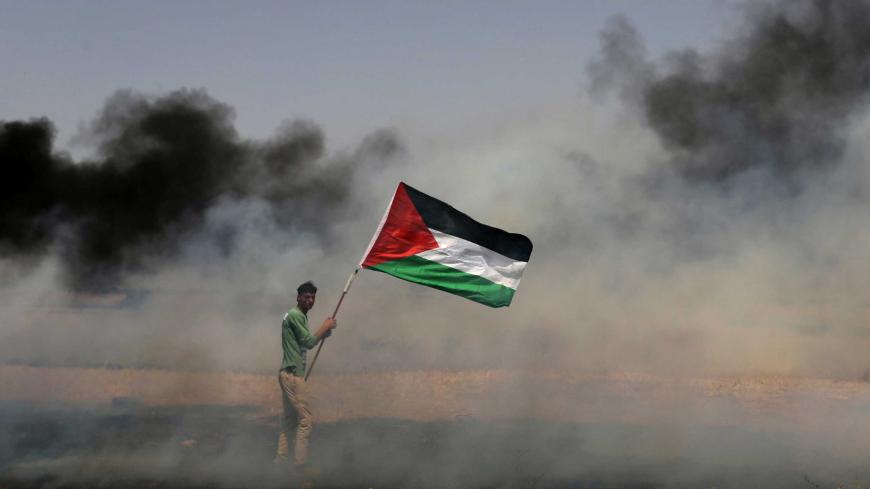 A demonstrator holds a Palestinian flag during clashes with Israeli troops at a protest demanding the Palestinians' right to return to their homeland, at the Israel-Gaza border in Gaza, April 13, 2018. - REUTERS/Ibraheem Abu Mustafa

It has become abundantly clear that an agreement between Hamas and Israel that would ultimately improve the economic and overall situation in Gaza is no longer in the offing, so both sides have begun exploring other options. On Sept. 4, Egypt informed Palestinian President Mahmoud Abbas that the negotiations it was mediating between Hamas and Israel had reached an impasse and would therefore be suspended. Egypt views Abbas as the main culprit in the failure of the talks on the grounds that without Abbas and without a Hamas-Fatah reconciliation, no plan to rehabilitate Gaza is feasible. The Egyptians see Abbas taking control of Gaza as the key for an international plan to save Gaza, but he has not managed to reconcile with Hamas. Still, Egyptian intelligence chiefs directed a warning at Hamas: Egypt would be forced to act if the organization takes actions that rekindle clashes along Gaza's border with Israel.

The warning followed reports that Hamas was planning to resume the mass protests along the Israeli border that it had launched in March. Hamas believes that the demonstrations, which often resulted in violence, were successful in raising international awareness of Gaza’s plight and forcing Israel to consider a deal on lifting or easing its 11-year siege against the territory.

Speaking to reporters on Sept. 4, Yahya Sinwar, Hamas' leader in Gaza, declared that the so-called Great Return March would resume despite a cease-fire agreed to in mid-August with Israel, because they are the only way for the organization and the Palestinian people to express their opposition to Israel and to the push by the United States to strip millions of Palestinians of refugee status and halt funding to them, thus “wiping out” the refugee problem.

On Sept. 7, some 7,000 Palestinian demonstrators massed at the Gaza-Israel border under the slogan “Returning to Palestine – Trump Be Damned.” Unlike in preceding weeks, when small marches and rallies were held to maintain some momentum for activities deemed an effective deterrent against Israel, this time activists urged the crowds to clash with Israeli soldiers and damage Israeli border installations. One Palestinian was killed in the ensuing violence, and dozens were wounded, according to the Gaza Ministry of Health. The 17-year-old demonstrator shot dead by Israeli snipers became the 173rd fatality of the Gaza-Israel clashes since March.

With prospects of a deal with Israel fading, Hamas is planning an even bigger demonstration on Sept. 14 to revive the momentum that petered out in recent weeks as a deal appeared to be coming together, hoping to keep the issue on the international agenda. This is where Egypt comes in.

An Israeli security source told Al-Monitor that Israel had conveyed a stern warning to Hamas through Egypt in recent days, threatening that the organization would pay a heavy price if the border protests resumed in full force. Israel had previously warned Hamas that unless it puts a stop to what the Palestinians describe as popular protests, Israel would consider renewing its assassination campaign against the movement’s leaders.

Mutual interests dictate the coordinated Israeli-Egyptian positions. Both sides, each for its own reasons, would like to see calm restored in Gaza and the humanitarian crisis there defused.

“The blowback of the explosions in Gaza is felt in Egypt,” the Israeli security source explained, speaking on the condition of anonymity. He noted that every war in Gaza generates protests in Egypt and around the Arab world, which in turn strengthen leaders that Egypt would rather see weakened, such as Turkish President Tayyip Recep Erdogan. Clashes with Gaza also boost Iran’s influence on the Palestinian issue in general and on Gaza in particular.

Egyptian President Abdel Fattah al-Sisi and his point man on Gaza, Intelligence chief Abbas Kamel, “would like to rid themselves of the Gaza problem,” said the Israeli source. “That is why they are investing huge efforts in trying to achieve reconciliation between Hamas and Fatah and mediating between Israel and Hamas.”

The source pointed to addition Egyptian considerations. “As long as there is unrest in Gaza, the Egyptian army has a hard time rooting out the Islamic Jihad cells in Sinai,” he said. Noting Cairo's broader concerns, he said, “Egypt would not like Gaza to overshadow ties within the Arab world, of which Egypt sees itself as the leader.”

Al-Monitor has learned from an Israeli defense source that the Egyptian officials who conveyed the Israeli threats and warnings to Hamas delivered a caveat of their own via Moussa Abu Marzouk, a senior Hamas official known to have good ties with Egyptian intelligence: If Hamas fails to adhere to the new rules of the game that Egypt has worked to establish — in other words, if Hamas resumes the violent clashes with Israel — Egypt will close the Rafah crossing, the only passage from besieged Gaza into Egypt.

Cairo's opening of the crossing for regular operations in June — after having opened it in mid-May for the month of Ramadan and the Eid al-Fitr holiday — appeared at the time to herald a partial lifting of the Gaza siege. Closure of the crossing would transform into a failure the achievements Hamas has boasted about in recent months.

The crossing's re-opening in June was done to create a climate conducive to Hamas-Israel negotiations. Typically Egypt would only open the crossing occasionally in gestures of good will for several days or even only a few hours, to ease pressure in the teeming enclave and to allow Palestinian departures for medical treatment. The crossing operating on a normal basis is the realization of Hamas leaders’ dreams. Its being closed again would constitute a heavy blow further eroding what are already horrific conditions in Gaza.

Egypt’s warnings have put Hamas in a bind. If its leaders block the protest marches, the international interest they have generated over Gaza’s fate will wane. It would leave them bound by a cease-fire with Israel but without Israel lifting its siege — in other words, a failure. If they urge Gaza residents to turn up at the border fence en masse to confront Israeli troops, they risk painful Israeli retaliation and possibly renewed assassinations of its leaders, as well as problems with Egypt, which would take them back to where they started.

So, what next? Presumably, Hamas will seek a compromise, as it always does. Its leaders will urge residents to confront Israeli troops — but will not pull out all the stops with public announcements of the protests, so as to control the number of protesters — just as long as the smoke does not reach the Rafah crossing and lead Egypt to carry out its threat.