The Popular Mobilization Units are expanding their presence in the strategic city of Basra by forming a Voluntary Reserves force, similar to the Iranian Basij forces. 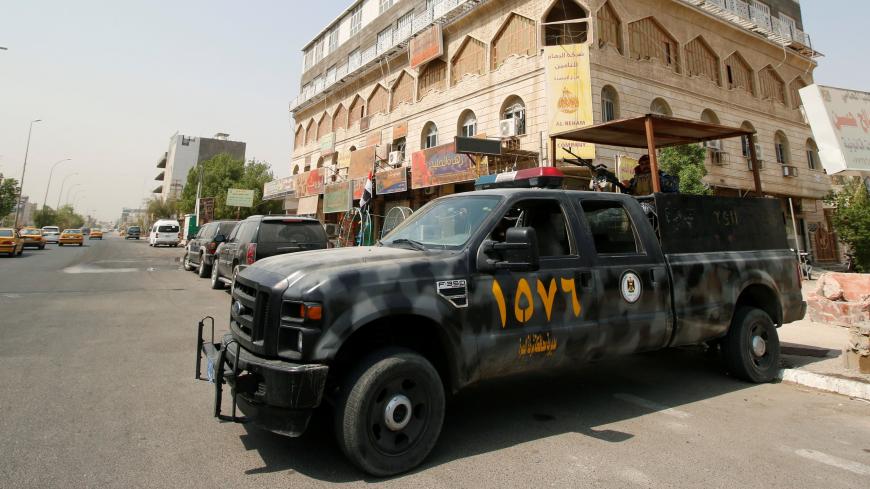 A military vehicle guards the street after a week of violent protests in Basra, Iraq, Sept. 9, 2018. - REUTERS/Essam al-Sudani

In an action suggesting the intent of the Popular Mobilization Units (PMU) to expand their presence and increase the number of their cadres in Iraq, the PMU’s Basra office announced Sept. 12 the formation of the Voluntary Reserves.

However, this expansion is facing considerable objections from various parties in the Iraqi arena.

According to a statement issued by the PMU, the force consists of 10 brigades.

The Voluntary Reserves were formed in response to the demonstrations that took place in Basra at the beginning of September, in which the demonstrators burned several offices belonging to pro-Iran PMU parties, in addition to the Iranian Consulate in the city.

The statement stressed that this move is due to the fact that “troublemakers, supported by foreign parties, had taken advantage of the demonstrators’ demands. They started burning and destroying public property and trying to infringe on the PMU. The Voluntary Reserves aim at confronting potential dangers within neighborhoods.”

The Voluntary Reserves have been involved in cultural activities for some time, including the establishment of cultural camps, in which pictures of Iranian Supreme Leader Ali Khamenei and the Hezbollah Secretary-General Sayyed Hassan Nasrallah are plastered all around.

After the destruction of public property around the city, the PMU in Basra put its forces on high alert. “The apparent security chaos in Basra has made it imperative for us to go down to the streets to establish control,” Ammar Fares, head of the PMU in Basra, said Sept. 8. Later, on Sept. 15, a march in support of the PMU took place.

The fact that the PMU is playing a security role in the southern Iraqi cities, especially in Basra, and the news about the formation of its Voluntary Reserves have brought about a negative reaction by civil society activists who have opposed an Iranian presence in the city for some time.

One of the aspects that angered them the most is the name: The word “Tabia” chosen for the “PMU’s Voluntary Reserves” is equivalent to Basij in Persian. The Basij is a paramilitary organization affiliated with Iran's Islamic Revolutionary Guard Corps (IRGC). The Basij was formed in 1979 and plays several roles, even in culture and services in addition to its security role. It is the IRGC's watchful eye in all governmental and semi-governmental organizations and institutions in the Islamic Republic.

Civil society activists have expressed resistance to the expansion of Iran's influence in this strategic city. The Basra Facebook page, in which millions interact weekly, opposes what it believes is a stripping of Basra's Iraqi identity and the spreading of the ideology of the Islamic Republic of Iran.

Civil activist Nael al-Zamil said Sept. 17 that the creation of the PMU’s Voluntary Reserves is “an attempt to expand the PMU and insert it into organizations within various areas. It is an attempt to militarize society and a tool of domination and spying on citizens, as was the case with the partisan organizations when the Baath Party ruled.”

Murtada Ali, a civilian activist who participated in the demonstrations in Basra, concurs with Zamil. “We believe the PMU’s presence in the street and the formation of the Voluntary Reserves are a means of intimidation against the demonstrators,” he told Al-monitor.

“We are concerned about these forces serving as a tool to suppress the protest against the ruling parties, whose military wings are represented by the PMU factions. We fear the Voluntary Reserves will be as loyal to those parties that the people of Basra are protesting against,” Ali added.

Iranian state institutions seem to be aware of the role these activists play in resisting Iranian influence. For this reason, a media campaign against them was launched.

Iran’s Mehr News Agency took an unprecedented move Sept. 13 and published an article in both Persian and Arabic, accusing three young activists from Basra of working for the United States and playing “a major role in mobilizing the street in Basra and promoting rioting among protesters” by coordinating with the US Consulate in the city.

The Mehr News Agency, affiliated with the Organization for Islamic Communications, which is very close to the Iranian regime, said the aim is to “undermine Iran's position in the region … and create division in the Middle East, especially in Iraq.”

On Sept. 9, PMU Adjutant Abu Mahdi al-Mohandes accused the US Consulate of giving the order to burn the PMU’s headquarters.

Mehr’s article, which puts the lives of these activists at risk, does not provide any evidence of its serious allegations, except that they participated in training courses conducted by the US Consulate in Basra. Al-Monitor contacted some of these activists, but they all refused to speak out, fearing for their security.

It seems that there are concerns about southern Iraq turning into a region similar to southern Lebanon. This is especially true in Basra, which is Iraq’s economic hub given how it contains the largest oil and gas wells in the country, as well as Iraq’s only seaport.

However, the Iranian expansion in Basra and in Iraq in general, through parties and paramilitary factions, is not just opposed by activists in Iraq. For instance, Muqtada al-Sadr, the leader of the Sairoon Alliance, which won the largest number of seats in the May parliamentary elections, has tried to distance his movement from Iran.

For his part, the supreme religious authority in Iraq, Ali al-Sistani, suggests a governance model that is completely different from the Iranian religious rule known as velayat-e faqih. Sistani supports the establishment of a civil state, a secular system of government that respects the religious beliefs of the people.

On the other hand, not all PMU factions are affiliated with Iran; some major factions such as Al-Abbas combat division, which is close to Sistani, do not have any kind of relations with the Iranians.

It seems that after the Islamic State was eliminated from Iraqi cities, political conflict began to intensify between those close to Iran — which is striving to increase its influence in Iraq, especially in strategic areas such as Basra — and others, be they Shiite or civil parties, that do not want Iraq to be bound in Iran's orbit.