How will Basra be affected by the closure of US consulate?

Officials and experts in the city of Basra warn of the massive negative effects on the city following the US State Department's decision to close its consulate there. 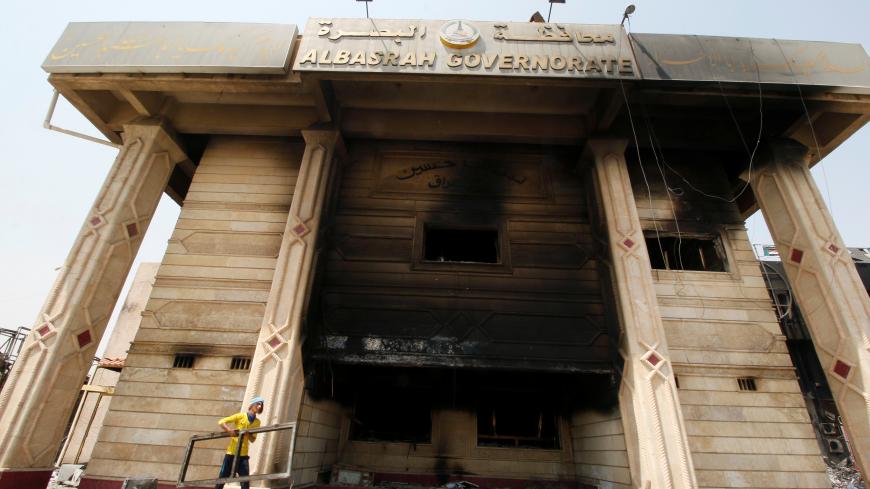 A man cleans the building of Basra governorate after demonstrations during which protesters torched the building, Basra, Iraq, Sept. 9, 2018. - REUTERS/Essam al-Sudani

The oil-rich port city of Basra is feeling the heat of the intensifying conflict between the United States and Iran. Pro-Iranian armed groups that threaten the United States from time to time are active in the city. The US-Iran tension is expected to affect the economic situation in Iraq in general, and in Basra in particular.

The US State Department announced Sept. 28 its intention to close its consulate in Basra and pull out its diplomats. This comes after three mortar shells targeted the US Consulate there.

On Sept. 29, US Secretary of State Mike Pompeo accused the Quds Force — a special force unit of the Islamic Revolutionary Guard Corps — and its commander Qasem Soleimani of being behind the threats. The United States “will respond promptly and appropriately to any such attacks,” he said.

The recent escalation got Iraq worried. The governor of Basra, Asaad al-Eidani, warned of the negative repercussions of the intensification of the Iranian-US conflict in Iraq in general, and Basra in particular. He pointed out on Sept. 29 that the closure of the US Consulate in Basra is the result of regional conflicts, stressing the bad repercussions of this closure on Basra.

Hakim al-Zamili, a leading member of Shiite cleric Muqtada al-Sadr's political movement, expressed concern Sept. 30 about the effects of the US-Iran escalation of tensions on Iraq. “The heated and tense statements exchanged between Iran and the United States will certainly be felt in Iraq,” he said. “The closure of the US Consulate at this time is intended to fan the flames of the escalating US-Iranian conflict. We are afraid of the repercussions of this escalation on the Iraqi situation.”

It is well-known that the Sadrist movement has a hostile attitude toward the United States, but at the same time it is distancing itself from the Iranian axis in Iraq.

On Sept. 27, just one day before the US Consulate closed its doors, US Ambassador to Iraq Douglas Silliman announced that the United States will partner with UNICEF to increase access to clean water for 750,000 people in Basra. He noted that his country will help organize a water conference to be sponsored by Iraq's General Secretariat of the Council of Ministers “to identify and prioritize quick action projects.”

The drinking water crisis was the spark that ignited massive protests early September.

“The presence of the US Consulate is a sign of safety in Basra,” said Kazem al-Waeli, a former adviser to the US-led coalition fighting the self-proclaimed Islamic State. He told Al-Monitor that the US-Iranian conflict would surely affect Basra’s economic situation, pointing out that the closure of the US Consulate would shake the city’s stability leading to an increase in the prices of insurance policies taken out by the largest companies in the oil sector.

He added, “This will increase the cost of oil production in Iraq. Basra has many oil fields, some of the largest in the world, operated by the largest international oil companies.”

It seems difficult, and even very unlikely now, that the United States sends any aid to the city after the closure of its consulate. Silliman had promised to help improve the living conditions of Basra residents, most notably by easing the drinking water crisis.

“Around $200 million have been allocated to the city of Basra by the US Agency for International Development for water projects and the construction of hospitals and schools in the city. These funds will not be disbursed and will be transferred back to the US Treasury,” Waeli said.

In a sign of escalation between the United States and factions close to Iran, the United States issued a new warning to its citizens on Sept. 28. “US citizens in Iraq are at high risk for violence and kidnapping,” the warning said.

Meanwhile, Iraqi armed factions close to Iran denied responsibility for the attacks against the United States, considering the decision to close the consulate as an escalation against them.

On the same day, the secretary-general of Kata'ib Sayyid al-Shuhada (Masters of the Martyrs Brigade), Abu Ala al-Wa'eli, had confirmed that the closure of the US Consulate was an American attempt to avoid being confronted with the fact raised by the brigades about “the US involvement in burning state institutions in Basra.”

Several figures from the Popular Mobilization Units (PMU) close to Iran, most notably deputy commander of the PMU Committee Abu Mahdi al-Muhandis, had accused the US Consulate of setting fire to the headquarters of the PMU factions and the Iranian Consulate in Basra in early September.

With the possibility of the United States freezing its development efforts and activities in Basra, the PMU, an ally of Iran, stepped up its service activities in the city in an attempt to win the support of the residents. The PMU deployed to Basra dozens of its high-level engineering officials and sent necessary equipment in an effort to alleviate the services crisis in the city that caused the outbreak of protests.

“We decided to exploit engineering efforts to solve acute problems,” said Muhandis who visited Basra Oct. 3 and met with the PMU’s military engineering executive staff in the city. “We also decided to stay at least for a year. We will exert great efforts."

However, if global engineering companies decide to leave Basra, it seems unlikely that the PMU can fill the ensuing vacuum.

As the conflict between the United States and Iran intensifies in the region, the city of Basra, known as the economic capital of Iraq, could become a conflict and war center rather than a center for economic development and prosperity. This would further exacerbate its already ailing economic situation.