US defense bill could impact arms exports to Middle East

This year’s US defense authorization bill calls for reforming America’s high-tech exports even as weapons sales to the region boom. 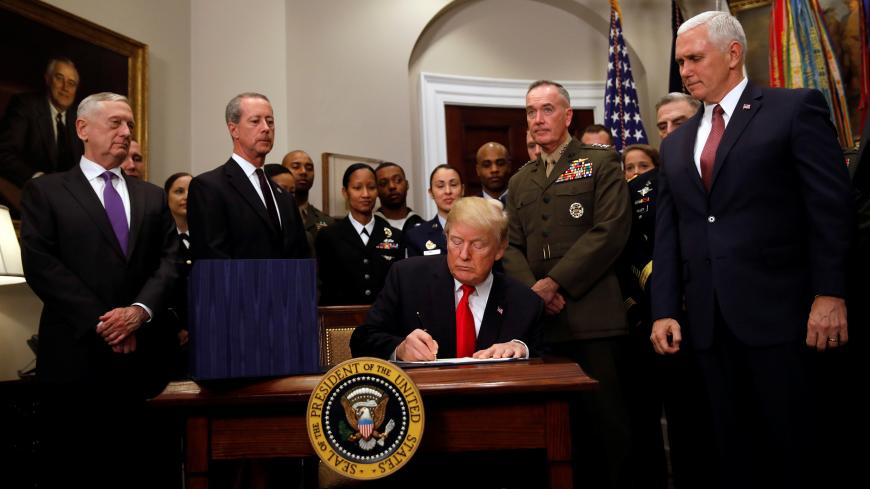 The annual US defense authorization bill heading to the White House after a final Senate vote this week pits President Donald Trump’s goal of protecting American technology against his desire to boost weapons sales to the Middle East and other regions.

The commander in chief has consistently advocated for US arms exports, promising a $110 billion weapons package to Saudi Arabia last year. The White House also announced reforms in April that would loosen export rules for fighter jets, drones, warships and artillery, while putting American diplomats in a frontline position to push for new sales.

But a provision in this year’s $717 billion National Defense Authorization Act, which sets Pentagon policy for the fiscal year that starts Oct. 1, could put a damper on those efforts. New language championed by the House Foreign Affairs Committee chairman, Rep. Ed Royce, R-Calif., pushes the administration to more closely regulate “dual-use” civilian technologies or equipment with sensitive US capabilities.

Fear of US technology benefiting American foes has been amplified on Capitol Hill by Google’s decision not to renew its contract for Project Maven, which provided artificial intelligence-driven analysis of Pentagon drone footage, even as the Silicon Valley giant continues to build a center for machine intelligence in China.

“In recent years, the government in Beijing has increasingly forced US companies to hand over sensitive technologies as a cost of doing business in China,” Royce said in a February statement when he introduced his bill. He said his legislation would modernize the US regulatory control system and “make clear the US will not tolerate this behavior.”

A Royce aide told Al-Monitor that the export controls are primarily for commercial and industrial items regulated by the Commerce Department that could have military use. Most arms sales, by contrast, are governed by the State Department.

Experts who watch the arms trade industry say the Royce bill is a good step toward tightening US control over its high-tech secrets. Some worry, however, that hollowed-out federal agencies could lack adequate staffing to enforce the rules.

“The whole point of export control reform is to build higher fences around the riskier things, the crown jewels,” Colby Goodman, director of the Security Assistance Monitor, told Al-Monitor. “They’re looking at how we protect our technology.”

The issue has become more contentious as the US defense industry faces greater competition for Middle East clients from a resurgent Russia and a rising China, which has led to a consolidation of arms makers. US foreign military sales totaled $42 billion last fiscal year, according to the Pentagon’s Defense Security Cooperation Agency, a $10 billion increase over 2016 driven largely by a surge in Middle East purchases fueled by tensions with Iran and intra-Gulf squabbling.

Russia, for instance, has shopped its S-400 missile defense system to major buyers of American equipment in the past year, such as Saudi Arabia and Qatar. NATO nations agreed to divest themselves of Russian arms during the alliance’s 2016 Warsaw summit, contributing to the clash between Washington and Ankara after President Recep Tayyip Erdogan inked a $1.5 billion deal for the S-400 last year.

Until Trump’s rule change earlier this year, the United States had avoided exporting armed drones to Middle Eastern countries, including the United Arab Emirates and Jordan, which formally requested MQ-9 Reaper drones during the Barack Obama administration. China in particular has benefited from the US restrictions, pushing variants of its so-called Phantom drone. More recently, a French sale of Rafale fighter jets to Egypt has been stalled by Washington’s withholding of American-made components for the plane’s cruise missiles.

Royce’s provision calls for an upgraded export control regime from Cold War-era rules adopted in 1979 and expands the definition of “dual-use” technologies to include terrorism and weapons of mass destruction. It does not specify which technologies it would seek to regulate, however. The United States is a party to a handful of arms control agreements, such as the Wassenaar Arrangement and the Missile Technology Control Regime, that seek to limit US exports of dual-use technology — from computer viruses to lasers — but none are legally binding.

“In light of growing global concerns over how to strike the right balance between foreign direct investment and national security interests, the Act seeks to bolster the US export control architecture itself,” the Chicago-based international law firm Kirkland & Ellis warned in April, saying the bill could force “prospective foreign investors in US technology companies to face greater regulatory headwinds.”