Turkey fumes over US sanctions, vows to retaliate

The US sanctions may make the release of American pastor Andrew Brunson, who is at the heart of the current US-Turkey crisis, much harder for Ankara. 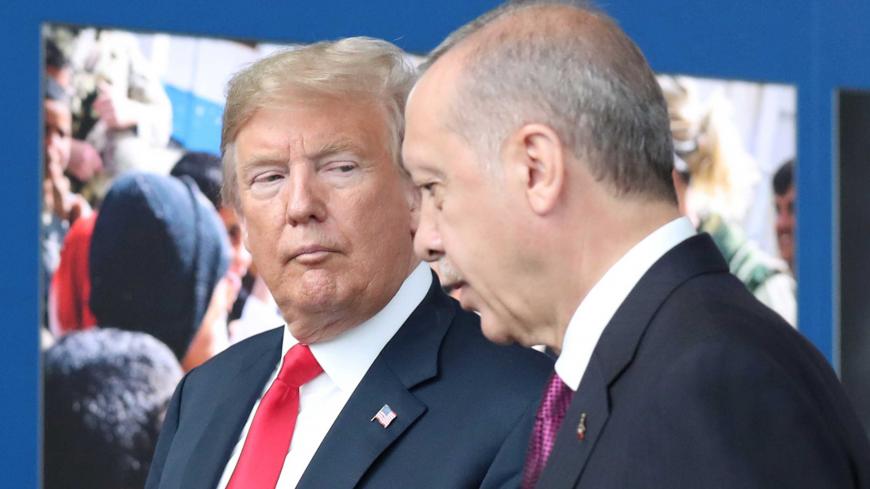 US sanctions against Turkey’s Justice Minister Abdulhamit Gul and Interior Minister Suleyman Soylu over the continued detention of American pastor Andrew Brunson have been met with fury and defiance in Ankara. President Recep Tayyip Erdogan’s government is vowing with new determination not cave to pressure from Washington and says commensurate sanctions against the United States are on the way.

The US Treasury Department accused the two ministers of “being responsible for the arrest and detention of pastor Andrew Brunson” as well as “implementing Turkey’s serious human rights abuses.” The Treasury decision follows the threats by President Donald Trump and Vice President Mike Pence of serious sanctions if Brunson is not released immediately and all charges against him dropped.

Turkey’s effort to relieve some of the pressure from Washington last week by transferring Brunson from his prison cell, where he has been since 2016, to house arrest in Izmir appears to have merely fed the anger in Washington.

Brunson is accused of complicity in the failed coup attempt against President Recep Tayyip Erdogan in 2016 that Ankara says was masterminded by Fethullah Gulen, the Turkish preacher residing in self-imposed exile in the United States. Turkey has failed so far to have Gulen extradited. Washington has refused to do so on the grounds of insufficient evidence and concerns that Gulen would not get a fair trial in Turkey.

Washington says both charges are baseless and claims Brunson is being held “hostage” by Turkey, presumably to secure Gulen’s extradition.

Invoking the Magnitsky Act, the Treasury said any property of the two Turkish ministers in the United States would be frozen and American citizens would be prohibited from engaging in transactions with them.

Ankara’s angry reaction to the Treasury’s announcement was immediate, after having been forewarned in a phone call earlier in the day from US Secretary of State Mike Pompeo to his Turkish counterpart Mevlut Cavusoglu.

The Ministry of Foreign Affairs' press release “strongly protested” the sanctions, “which target two of our honorable ministers.” It said the move “neither complies with state seriousness, nor is it explicable within the terms of law and justice.”

It went on, “There is no doubt that the decision, which disrespectfully intervenes with our judicial system, stands in contrast to the essence of our relations and will seriously damage the constructive efforts made in order to resolve problems between the two countries.”

It called on Washington to rescind this “wrong decision” and warned that "an equivalent response to this aggressive attitude will be given without delay.”

Cavusoglu tweeted, “We will be unable to solve our problems unless the US administration understands that it cannot have its unlawful demands met in this way.”

Gul and Soylu were also defiant. Gul said in a statement released over Twitter that his “only dream was to live and die in these lands” and indicated that he had no property in the United States or dealings with US citizens. “The only property we have in the US is FETO, and we will not leave him there; we will take him back,” Soylu said. He was referring to Gulen and his so-called terror network.

The two sides have managed to weather many storms over the past five decades, including a US arms embargo in 1974 over Turkey’s intervention in Cyprus. Nevertheless, relations have never come to the brink of the kind of total collapse we are facing today. It is difficult to envision an improvement anytime soon, given Turkey's determination to hold and try Brunson.

The US Senate's approval of a defense bill that prohibits the sale of F-35 jets to Turkey until the Pentagon prepares a report on the state of Turkish-US relations is set to exacerbate the situation further. The Senate vote came on the same day that the Treasury announced its sanctions on Gul and Soylu.

Unsurprisingly, the pro-government media in Turkey is overflowing with high voltage defiance and rife with calls on Ankara not to submit to pressure from Washington.

Ibrahim Karagul, the editor-in-chief of pro-Islamist and fervently anti-American Yeni Safak, summed up the general sentiment in a hastily penned article after Washington announced its sanctions.

Accusing the United States of being behind the abortive coup in 2016 and an attempt to assassinate Erdogan during that time, among other things, Karagul asserted that the strategic partnership with America was over now that the country “had become the greatest threat to Turkey.”

Karagul also called on the strategic Incirlik air base in southeastern Turkey, where forces have been deployed for decades — and from which they conduct operations in Syria today — to be immediately closed to US forces.

The pro-government Daily Sabah argued that Washington’s sanctions were part of a US plan to force the Turkish economy to collapse. As proof, it pointed to the dramatic recent drop in the Turkish lira’s value against the dollar. Sabah’s editorial asserted, “Those who have been unable to force Turkey to its knees politically are trying to do this with ugly economic attacks and the threat of sanctions.”

The lira continued its dramatic downward spiral after the sanctions were announced.

Turkey’s business community is clearly concerned over the latest developments.

Mehmet Ali Yalcindag, the chairman of the Turkish-US Business Council, issued a written statement in response to Washington’s sanctions against Ankara. Referring to the decision as a “heavy political intervention both in terms of Turkish-US relations and … of a legal process in Turkey,” Yalcindag characterized it as “unacceptable” as the countries are NATO allies.

Stressing that Turkey and the United States had managed to overcome such difficulties in the past, Yalcindag said it's crucial to ensure that this crisis does not last long and is resolved before it does lasting damage to ties. He wrote, “Let’s not forget that we are the start of the 21st century undergoing a period when alliances are disintegrating and being established anew. Lasting friendships are very important. Everyone needs each other.”

Yalcindag ended his statement by expressing his belief that Trump and Erdogan “have the ability to listen to reason and to their consciences, and will concentrate on solving this problem speedily.”

Asli Aydintasbas, a senior policy fellow at the European Council on Foreign Relations, believes that the US Treasury’s sanctions are essentially symbolic because she doesn’t think Gul and Soylu have any assets in America. She argued in her column in Cumhuriyet, “The object is to send Turkey a message that we are serious.”

Pointing out, nevertheless, that Turkey is now a country that faces sanctions, Aydintasbas said that while negotiations between Ankara and Washington were continuing to try to solve the issue, the matter has become much more complicated.

“As of yesterday morning, Turkey was prepared to hand Brunson over but wanted to spread this process over time. Now, however, it is politically hard for it to return Brunson to the United States quickly,” she wrote.

“It seems Turkey made a serious miscalculation,” Aydintasbas argued.