After her father's death by Israeli shelling, a teenager from Gaza decided to realize his dream — having an international swimmer in the family. 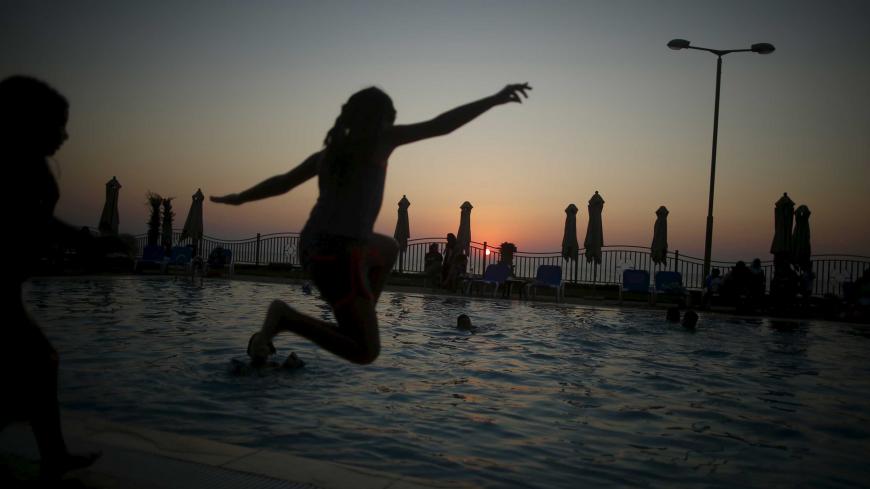 A Palestinian girl jumps into a swimming pool in the northern Gaza Strip, July 30, 2015. - REUTERS/Mohammed Salem

Fatima began swimming 2015, following the death of her father, Jalil, in 2014; he was killed during the shelling of Beit Lahia by Israeli tanks. Her father was hit by a shell right in front of their house.

“I had to find a way to work out my emotional strain after the death of my father. I found relief in swimming. My father used to take me to the sea, hoping that one day our family would have a professional swimmer,” Fatima told Al-Monitor, explaining that she felt closer to her father’s memory when she swam.

Her first goal is to make the Palestinian national swimming team and go to Tokyo for the 2020 Summer Olympics.

The 13-year-old has mastered the freestyle swimming technique. The club offers her basic swimming equipment required for international swimmers — otherwise, she would have no goggles or even a swim cap, as these are hard to find in markets in the Gaza Strip.

Traditionally, there have been few female competitive swimmers in the Gaza Strip, but their number has increased in recent years. There are currently 11 swimming clubs in the Strip, with approximately 100 swimmers in each.

Fatima's mother, Lila Abu Shedeq, is proud of her daughter. “It was strange to see Fatima interested in swimming, as in our culture it is a men’s sport. But we did not stand against her, her oldest brother and her uncles have always encouraged her to reach her goal of participation in the Tokyo Olympics in 2020,” the mother told Al-Monitor.

“Fatima is not paid for participating in local tournaments or for her training, but swimming has transformed her life and eased the pain of having lost her father and better cope with stress,” the mother added.

Fatima returns from school and heads straight to the club to complete her swimming training. She participated in the short-distance championship for girls and boys at the end of July against 50 other female swimmers under 14. She ranked first in freestyle swimming.

Mahmoud Shamaa, deputy president of the Palestinian Swimming Federation and Aquatic Sports, told Al-Monitor, “The federation began focusing on girls, especially those with good swimming techniques, through the clubs across Gaza. We aim to form a team of female swimmers who can compete in Arab and international contests.”

“Until quite recently, families did not allow their daughters to swim, so this sport was limited to boys, with a few exceptions in some families. Today, however, parents are increasingly encouraging their daughters to learn swimming and to swim,” he said.

But economics makes it difficult for both sexes to train all year round. The electricity cuts in Gaza made it impossible for aspiring swimmers to practice throughout winter. “Swimmers are required to train all year long. But in the winter of 2017, we could not heat the indoor pools. Some of the swimmers fell sick as a result and we had to suspend training during winter and resume in the spring,” Shamaa said.

Palestinian athletes, especially swimmers, face many obstacles, most importantly Israel’s movement restrictions that can prevent swimmers from traveling back and forth between the Gaza Strip and the West Bank to participate in Arab or international competitions or training camps.

The swimming federation, however, is seeking to finalize forming a swimming team to represent Palestine in the international arena. “Every couple of years, we select new swimmers. We are looking forward for the Palestinian swimming team's participation in the Tokyo 2020 Olympics,” Shamaa said.

Fatima, along with other under-14 champions Malek Abu Dayer and May Abu Odeh, continue to train vigorously. It remains to be seen whether Fatima will be able to carry out her father’s dream of having an international swimmer in the family, but she has certainly become a pioneer among Palestine’s female swimmers.