All athletes struggle and sacrifice to reach the Olympics, but Syrian athletes have faced more than the usual trials. 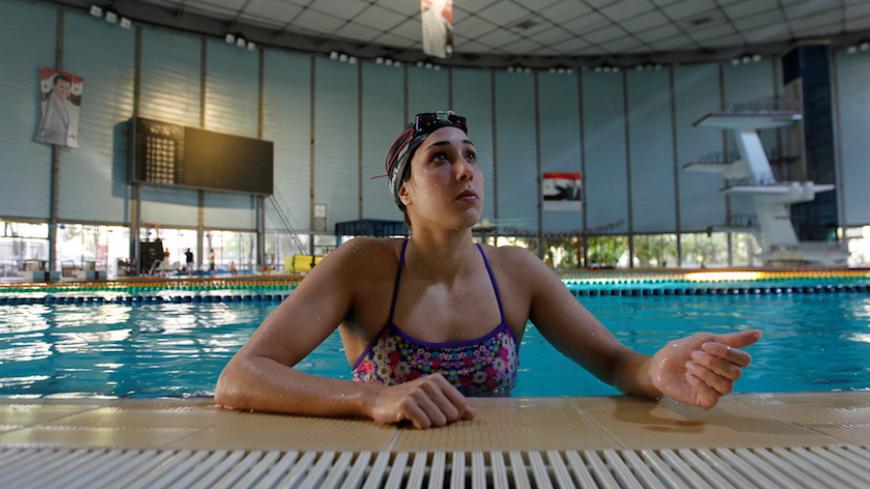 Syria’s Olympic athletes have faced incredible challenges preparing for the international competition during wartime, yet the obstacles have had a positive effect on their morale and psychological well-being, at least according to one prominent sports official.

The hardships of the war and the risks the athletes have taken just to access training facilities have increased their determination and commitment to Olympic achievement, according to Muwaffaq Jomaa, the president of the General Sports Federation of Syria (GSFS).

In an interview with Al-Monitor, Jomaa noted the seven members of Syria’s Olympic team will compete in five events: track and field, swimming, weightlifting, judo and table tennis. In addition, 11 athletes will compete in the Paralympic Games in September.

Two young swimmers who fled Syria will be participating as part of the Refugee Olympic Team. Syria’s five-year-long civil war has had a huge impact on many countries in the Middle East, as Syrian refugees fled to Jordan, Lebanon, Turkey and European Union countries, making it a global issue. The crisis has not only led to external and internal displacement of millions of people and physical devastation of the country, but also has weakened Syrian arts and culture as well as the Syrian Olympic movement.

As the war continues, athletes will compete under the Olympic motto "Citius, Altius, Fortius" (Latin for "Faster, Higher, Stronger"); they will represent the main message of the games, which is peace for all people regardless of their gender, race, beliefs and ideology. The Olympic flame will be lit Aug. 5 at the Rio de Janeiro Olympic Stadium, despite political conflicts in the Middle East and international terrorism that show no indication of being ameliorated in the near future.

In addition to difficult and sometimes dangerous training conditions, Syrian athletes had difficulty obtaining visas to participate in foreign leagues in some European countries, Ibrahim Abu Zayd, the head of the Syrian Olympic delegation, told Al-Monitor.

Some European countries did allow for preseason training, but “nonetheless, it was not enough — even though we have skillful athletes, which is proved by official invitations” received from the International Olympic Committee, Zayn said.

He said that Ghufran Almohammad, Mohamad Kasem and Heba Allejji will compete in the 400-meter hurdles, judo and table tennis, respectively. Kasem is very determined. “I will give my best efforts, in line with Syria’s reputation in judo, despite the existence of tough and well-trained rivals,” he told Al-Monitor.

Syrian high jumper Majd Eddin Ghazal, who achieved the best jump at the International Association of Athletics Federations World Challenge in Beijing in May, will be Syria’s Olympic flag bearer in Rio.

In an interview with Al-Monitor, Ghazal also highlighted problems in obtaining visas to European countries for training and competitions. He said, “We had to avoid these obstacles as much as we could and instead we focused on training inside the country” most of the time. He added that he was recently able to attend a series of training sessions in Schengen countries, including Spain, Monaco and Hungary.

“I will carry the flag of the Syrian Arab Republic on behalf of my country; it is a matter of pride for me to present my appreciation to the leadership of the GSFS, which nominated me to this task. But I do not want to turn the subject into political rivalry with any other party, because I am an athlete before anything else,” he said.

Swimmer Baean Jouma, who will compete in the 50-meter freestyle event, also emphasized that she is proud to represent her country in the Olympics, which she noted is the dream of any athlete in the world. Despite the challenges of training during the war, she believes she is relatively well-prepared. She was able to attend a four-month training camp in Russia, where she competed in a Russian swimming championship. She told Al-Monitor, “It is truly difficult to promise that I will get a medal, as new scores appear every now and then — but I will do my best by all means.”

Syrian weightlifter Man Asaad, who has qualified to be ranked among the top 10 weightlifters at the Rio Olympics, said in an interview with Al-Monitor that he will give his best effort to compete despite the complexities of representing Syria because of the ongoing political conflict.

The Syrian athletes know that, depsite the setbacks, it is important for them to represent their country at the biggest sports event in the world. In the coming weeks, we will see whether they can add at least one more medal to Syria’s all-time tally, which currently stands at three — one each in bronze, silver and gold.