The appearance of a Hamas-affiliated political analyst on Israeli i24News channel unleashed charges of "media normalization" with Israel. 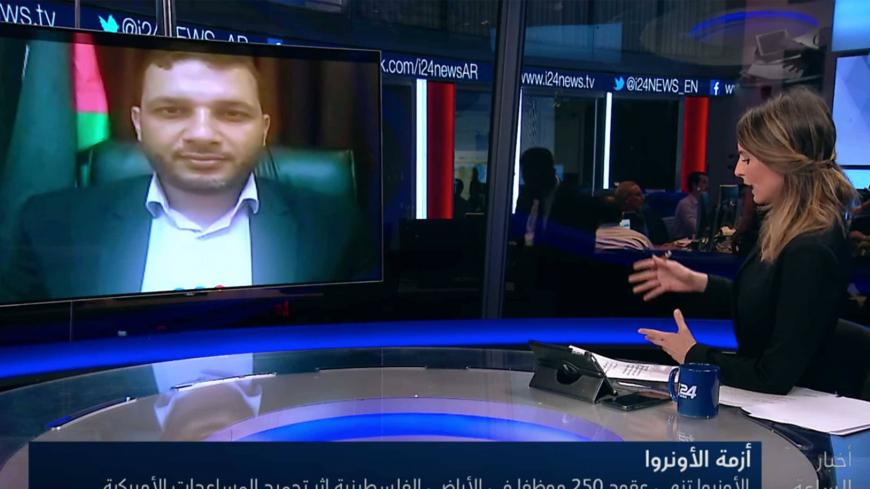 GAZA CITY, Gaza Strip — On July 25, Ibrahim al-Madhoun, a political analyst and director of the Youth Media Center, Hamas’ media wing, appeared on Israeli i24 News in a Skype interview for the 6 o’clock news. His appearance elicited a wave of negative reactions among activists on social media who saw it as media normalization, that is, establishing a dialogue between Palestinians and Israelis through the media. Prevailing opinion in Palestinian society rejects such a relationship.

Madhoun spoke about the negative repercussions on Palestinian refugees of the escalating financial crisis of the United Nations Relief and Works Agency following the Jan. 5 US decision to freeze $125 million in annual aid to the organization. The actual content of the discussion was not enough to shield Madhoun from criticism.

i24News, which began operating in 2013, broadcasts in Arabic, English and French. Arab48, a website focusing on Israeli media, published an article in July 2014 claiming that i24News goal is to improve Israel's image, especially among Arabs.

On July 26, Hadi al-Ijla, a Palestinian political researcher at the Institute for Middle East Studies in Canada, used Facebook to criticize Madhoun’s appearance, stressing that refusing to engage with Israeli media is part of Palestinian resistance against the occupation. The next day, Mohammed Jaser, an independent journalist, wrote on Facebook, “Your appearance on an Israeli channel will not change the conviction of the Israeli settlers. You are just a terrorist to them even if you are peaceful!”

Meanwhile, Madhoun had himself taken to Facebook the day after his interview to make his case and to apologize. “I have recently been criticized by dear friends for appearing on an Arabic-speaking Israeli channel,” he wrote. “I only wanted to introduce Israeli society to a Palestinian narrative and a message of resistance from the streets to influence Israeli viewers, alter their convictions and shake their domestic front.” He added, “I formally apologize to Palestine’s youth, media and every citizen for my misjudgment of the situation.”

The majority of the people who commented on Madhoun's post accepted his apology. Madhoun told Al-Monitor, “Now that I have apologized, I will not appear on an Israeli channel. i24News contacted me for another appearance, but I declined. I have decided to give the Palestinian audience what they want.”

Madhoun's appearance violated a Dec. 25, 2012, decision by Hamas' government in Gaza prohibiting journalists and other media professionals from dealing with or working with Israeli media outlets, considering the outlets hostile to the Palestinian people.

“The government decision to ban working with Israeli media is still in force,” Salameh Maarouf, head of the Hamas government's media office in Gaza City, told Al-Monitor. “Madhoun's appearance could be regarded as a misplaced personal move. This does not mean Hamas took a decision allowing it.”

Maarouf further remarked, “We do not impose any sanctions against those who violate this decision. We do, however, summon them to discuss their motives. We also reiterate the need to abide by the decision and ask them to make a written or oral assertion not to violate it again, and this is what happened with Madhoun. Should a violation be repeated, those responsible will be declared supporters of normalization with Israel and thus be shunned by Palestinian society. Palestinian media would no longer host them. We believe this decision protects Palestinian society from Israeli propaganda.”

Maarouf also said Hamas still believes there is no point in having a dialogue with the Israeli public or dealing with its media. In addition, the movement sees media normalization as recognition of the legitimacy of the Israeli occupation of Palestinian territories.

In addition to Madhoun's interview, the same i24News broadcast included a discussion of Palestinian reconciliation with two other Gaza Palestinians — Zulfiqar Swairjo, a member of the Popular Front for the Liberation of Palestine's Central Committee and Fatah spokesman Atef Abu Seif. Their appearances were not, however, met with public anger.

Swairjo claimed to Al-Monitor that he did not know the channel that was interviewing him. “The correspondent spoke Arabic and identified himself as a reporter for an Arab channel called Lualua TV, so it did not cross my mind that it could be an Israeli channel. Had I known I was giving a statement to i24News, I would have refused, because media normalization with Israel is unacceptable.”

Abu Seif also denied that he knowingly spoke to i24News channel, telling Al-Monitor, “I do not accept interviews with Israeli media.” On the broadcast, both men were shown being interviewed in Gaza using a microphone without a channel logo.

Maarouf stressed that i24News had not been granted permits to work in Gaza. He therefore believes that there are Palestinian correspondents for the channel working under the guise of fake media outlets to make money.

Nashat al-Aqtash, a professor of journalism and public relations at Birzeit University in Ramallah, told Al-Monitor that leaving the decision about whether to talk to Israeli media to individual Palestinians is unacceptable normalization with Israel. At the same time, Aqtash believes that no harm can come from Palestinian media experts talking to Israeli media outlets.