Without the support of Palestinian President Mahmoud Abbas, Israel and Hamas will have to make do with a small-scale truce agreement. 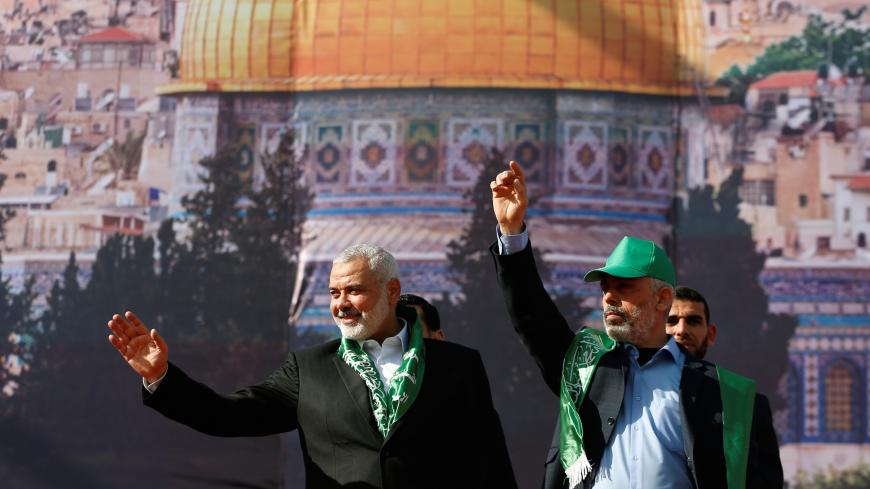 Hamas sent a delegation from Gaza to Cairo on Aug. 14 for another round of discussions on the outline of the arrangement that is taking shape with Israel under Egyptian mediation and with UN cooperation. A Hamas source told Al-Monitor that the sides are nearing the finish line. The biggest question is whether the Palestinian Authority will be part of the arrangement.

In order to realize a “large program” Israel-Hamas arrangement, the Ramallah Palestinian leadership must be handed civil responsibility over the Strip. According to Hamas, this program would lead to an almost complete removal of the blockade on Gaza. But should Ramallah refuse, Hamas would have to settle for a “small program” of significant easements on the transfer of raw materials and food supplies from Israel and Egypt, as well as the expansion of economic initiatives and infrastructure development.

As of now, it seems that all the efforts to harness Palestinian President Mahmoud Abbas to be part of the “large program” have been in vain.

A Fatah delegation headed by head of Fatah's Central Committee Azzam al-Ahmad was sent to Cairo about two weeks ago to find a compromise in the main disagreement between the PA and Hamas: control over the security apparatus in the Strip. It became clear very quickly that the delegation was not empowered to not offer enough.

According to a Hamas source who spoke to Al-Monitor, Abbas’ opposition is psychological and has little to do with the actual facts on the ground. According to the source, Abbas does not want to be a fig leaf in a deal with two entities he hates. The proposals submitted to him by Egypt were not appealing, to say the least. For example, they offered to give him civil responsibility over Gaza and a promise that control over Hamas’ security apparatus would be transferred to him gradually. But a gradual process was too slow. And many Palestinian seniors in Ramallah believe that without significant control over the security forces and enforcement rights, civil governance in Gaza is doomed to failure.

Abbas’ refusal to be part of the arrangement only emphasizes the gaps between Israel and Hamas on critical issues, for which solutions will probably not be found. One example is the development of economic projects and control over raw materials that Israel will transfer to Gaza via the Kerem Shalom border crossing. Who will control the border crossings? Will it be possible to ensure that Hamas will not siphon resources like cement, iron and construction materials for military needs? Hamas leaders are not willing to allow international bodies to supervise the crossings, a prospect it considers humiliating.

Thus, the discussions are now on the “small program,” as there is no other choice. This small-scale plan is supposed to be carried out in four stages. Here, too, are many unknown variables.

The first stage in the outline that is taking shape is about what Israel calls “Hamas’ provocations.” It means an absolute halt of border demonstrations and incendiary kites and balloons. Hamas seems to be adhering to this condition.

Defense Minister Avigdor Liberman announced on Aug. 14 that the Kerem Shalom crossing, which was closed three weeks ago, would be reopened Aug. 15 on the condition that quiet prevail on the Gaza-Israel border, in his words. And the crossing did, indeed, open on Wednesday at nine a.m. Liberman did not volunteer information to the Israeli public and did not say whether the quiet is part of the arrangement that Israel, Hamas and Egypt are discussing. This is also the reason that Israel denied last week that a cease-fire had been achieved with Hamas meant to protect the understandings that had already been achieved with Egyptian mediation.

In the second stage, Israel and Egypt commit themselves to a joint effort to boost the electricity supply to the Strip from the Israel Electric Corporation’s lines and from a power station to be built in Sinai.

It seems that in this section of the arrangement that is being hammered out, there are no obstacles that cannot be overcome. So far, so good. However, the problematic parts are next: a deal for Hamas’ return of the bodies of Israeli soldiers Oron Shaul and Hadar Goldin (killed in 2014) and of Israeli civilians, and the establishment of large economic projects that are supposed to involve the removal of most of the blockade restrictions on Gaza.

According to the proposed outline, the first step is the return of the bodies and civilians. Only after that will the next and crucial stage begin: the large economic projects including an airport in El Arish and a naval port in Ismaila. UN emissary Nickolay Mladenov promised to put all his weight behind efforts to recruit hundreds of millions of dollars from the Gulf states.

However, the arrangement carries the seeds of its own destruction in the early stages. Hamas’ military wing will not easily give up its bargaining chips even if Israel frees the Shalit Deal prisoners that were re-arrested in June 2014 just prior to Operation Protective Edge. The heads of the military wing, who have promised the families of the prisoners in the Gaza Strip that hundreds of prisoners would be released from Israeli prisons, will try to extort more assets from Israel. This is the reason that Hamas insists on separating the agreement into two tracks.

Regarding the economic stage, which is supposed to create employment for tens of thousands of Palestinians in Gaza, there can be no guarantees so long as Abbas continues to refuse to take civil responsibility over the Strip. Egypt is inflicting heavy pressure on him, but Abbas is not budging an inch. He feels that in any case, he could be the one to lose the most in such a deal.

If Abbas would agree to send his people to Gaza and the arrangement subsequently fails, Israel and Hamas would engage in another armed conflict, and Abbas would find himself in the middle of a war that is not his. If the arrangement succeeds, Abbas would be viewed as someone who helped Israel to turn his opponent Hamas into the leading political movement of the Palestinians.

Thus, we are left with the default option: A small and very brittle arrangement.