By holding indirect talks with Hamas about a long-term cease-fire, Israel is indicating that it views and accepts the Islamist movement as the political sovereign of Gaza, a shift that could have significant repercussions. 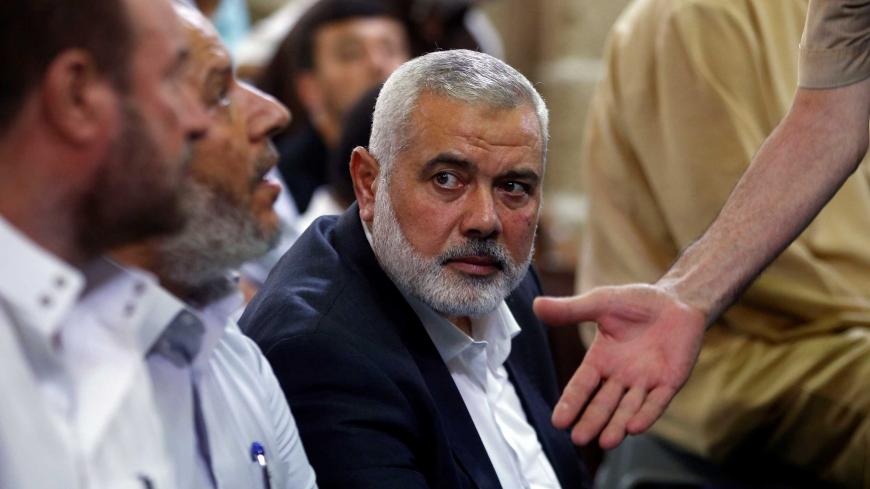 Hamas chief Ismail Haniyeh looks on as he attends the funeral of Palestinian Hamas militants who were killed in Israeli tank fire, at a mosque in Gaza City, Gaza, July 26, 2018. - REUTERS/Mohammed Salem

Israel’s Security Cabinet on Aug. 5 discussed once again the developing agreement with Hamas. Most details of the deal remain under wraps to avoid a leak that could possibly torpedo it. Egypt and UN envoy Nickolay Mladenov are involved in the negotiations along with the two parties.

A source from Hamas' pragmatist camp told Al-Monitor that a deal lifting Israel’s 11-year siege of Gaza would be a victory for the popular struggle conducted by residents of the enclave in recent months. The multi-stage understandings that Egypt and Mladenov are promoting are nearing the final phase, with the Hamas leadership awaiting decisions by Israel.

While Hamas would like to present such an agreement to Palestinians in Gaza as the successful culmination of an armed and popular struggle, Israel is seeking to blur the fact that it is conducting negotiations with a movement it has long excoriated as a terror organization. Instead of saying that these are the first talks in 11 years on lifting the blockade of Gaza, Israeli officials speak of “regulation” of Gaza. Israel has used similar euphemisms in the past to describe deals with the Palestinians. The 2005 withdrawal of Israeli troops and settlements from Gaza was called “disengagement.” At the end of the 1990s, the term “pulse” was used to describe Israel’s phased withdrawal from parts of the West Bank under the terms of the Oslo Accords. Either way, the latest Security Cabinet session dealt with removing the economic pressure on Gaza and lifting most of the restrictions that Israel has claimed for years were critical in its fight against Hamas.

This state of affairs is reminiscent of the arguments Israel made against a pullout from Lebanon until it withdrew in May 2000. At the time, the prevailing political and public narrative said that withdrawing from Israel's self-declared “security zone” in southern Lebanon was unacceptable because the risks would far outweigh the price Israel had paid to remain there for almost two decades. Israel had invaded Lebanon in a campaign it dubbed Operation Peace for Galilee on June 6, 1982, and eventually it would see 670 Israeli soldiers and other security personnel killed; four were declared missing. The military pullout ordered by the government of Prime Minister Ehud Barak proved that the so-called “security zone” did not contribute to safeguarding Israel’s security, certainly not in any way that would justify such extensive loss of life in those years.

Has the siege of Gaza, now under discussion by the top government echelons, made any significant contribution to the safety of the communities in southern Israel in recent years? A definitive answer is difficult at this point, but the same decision-makers who have been at the helm of government for the past 11 years and have repeatedly claimed that lifting the siege would encourage Hamas to arm itself and escalate its struggle against Israel are now debating an agreement with that very same Hamas. None is warning of an impending catastrophe.

Israel is openly discussing a long-term “regulation” agreement that would result in a gradual lifting of the Gaza siege. At the crux of the agreement is an issue of principle. Israel is coming to accept Hamas’ rule of Gaza, recognizing Hamas as the sovereign there and discussing a deal with its leadership.

Following the Security Cabinet meeting, a senior Israeli official told reporters that the contacts currently underway focus on one goal: a cease-fire. After all, it is not easy for the government to concede that Israel is conducting negotiations with a terror organization. Clearly, the talks are not only about a truce. They are about an arrangement that would naturally include a Hamas commitment to desist from all violence against Israel.

For years, Israel upheld the principle of refusing to negotiate with terrorists, a principle identified primarily with Prime Minister Benjamin Netanyahu. The recent developments on this issue could have diplomatic repercussions. Israel will no longer be able to reprimand any country or international officials over meetings or contacts with Hamas representatives. The agreement, if approved, will be a clear, undeniable declaration that Israel views Hamas as a political entity representing the residents of Gaza and being responsible and committed to their welfare.

In the past, Israel declared that it would not negotiate with Hamas until the organization fulfilled three parameters issued by the Quartet (the European Union, United Nations, United States and Russia): that Hamas recognize Israel, renounce violence and accept existing peace accords, namely Oslo. Hamas leader Ismail Haniyeh consistently used Arabic terms of negation to emphasize that he would never recognize the existence of the State of Israel.

For now, most Western countries still view Hamas as a terrorist organization. They might change their tune if Israel gives the movement its seal of approval. Will the Foreign Ministry in Jerusalem be able to condemn the invitation of Hamas representatives to an international forum?

The emerging agreement also affects Israel’s relationship with the Palestinian Authority. Netanyahu and Defense Minister Avigdor Liberman have long been dismissive of Palestinian President Mahmoud Abbas. Netanyahu has claimed for years that Abbas is not a partner for peace, whereas Liberman often calls him an impediment to peace and urges his removal. Even as they eschew negotiations with Abbas, who has espoused nonviolence throughout his time in office and has continued coordination between his security forces and Israel’s, they are coming to understandings with Hamas, which openly favors the path of terrorism against Israel.

A top Fatah official in the West Bank speaking to Al-Monitor on the condition of anonymity said that Israel continues to prove that “it only understands force.” Just as the 2005 withdrawal from Gaza was considered a blow to Abbas’ conciliatory line and a victory for Hamas' rejectionism, Israel, with its emerging deal to lift the siege against Gaza, is showing the Palestinians that the Hamas way is more effective.