Iranian Sunni Muslim activists have reported that Sunni worshipers were blocked from entering their prayer hall in eastern Tehran on the occasion of Eid al-Adha. 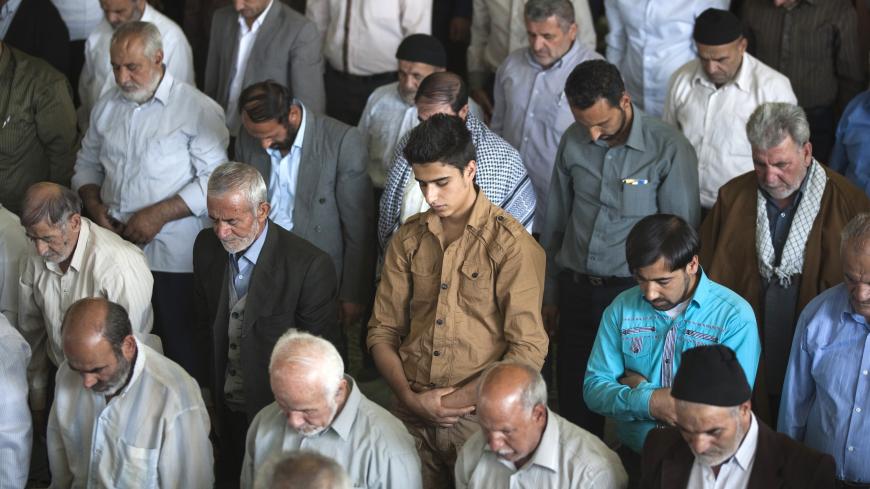 News reports are saying that Sunni worshipers who had gathered outside a prayer hall in Tehran's eastern Resalat neighborhood were dispersed by the police and barred from entering the venue to hold communal prayers on the occasion of Eid al-Adha, the Feast of Sacrifice, commemorating Abraham's willingness to sacrifice his son as God had commanded. Sources affiliated with Sunni activists say an official permit for the gathering had been obtained from Interior Ministry officials and the Tehran governorate's political deputy.

Eyewitnesses who had planned to participate confirmed the accuracy of the reports to Al-Monitor, adding that there had been no use of force by the security forces and that the crowd had left the area peacefully. Iran, including the capital, is predominantly Shiite, and the Sunni minority has long complained of marginalization and state control.

The Sunni residents of the capital, mainly from the border provinces of Sistan-Baluchistan, Kurdistan and Golestan, say they have struggled for years to be able to conduct prayers in their own mosques. According to state media, there are at least nine "mosques" used by Tehran's Sunni population, but Sunni activists say that they are not allowed to build houses of worship incorporating conventional Islamic architecture featuring two minarets and a dome.

The lack of official permits has, therefore, left them with no option but prayer halls, usually spacious apartments, parking lots and other large spaces. Worshippers gather there for communal Friday prayers as well as for Islamic holidays, such as Eid al-Fitr and Eid al-Adha.

In one controversial case, one such venue was raided and partially demolished three years ago. Municipal officials cited the lack of authorization for "construction expansion." Reports on state media claimed that the footage of the incident "broadcast" on "hostile Wahhabi" outlets was really video of Israeli forces razing a Palestinian mosque in 1991.

Whether the nine Sunni venues are actually mosques is disputed even among Sunnis, but one thing certain is their unfulfilled demand for a grand mosque in Tehran. In the Sunni Islamic tradition, grand mosques differ from local mosques. In the former, residents from all the neighborhoods of a city gather for Friday prayers and prayers on important religious occasions.

Some extremist Shiite activists insist that even small Sunni prayer halls should be prohibited in the capital, claiming that they could become hotbeds for nurturing terrorism, Wahhabism and Saudi and Emirati influence. Yet, the leaders of the Sunni mosques say they are in close contact with Iranian authorities and have never pursued any goal beyond practicing their religion.

Molawi Abdulhamid, a popular Sunni cleric from Sistan-Blauchistan, has long campaigned to obtain a permit for the construction of a Sunni grand mosque in Tehran. In past presidential elections, Abdolhamid and other Sunni leaders have endorsed pro-reform candidates, pinning their hopes on promises of more space and Sunni integration. In the 2013 presidential election, the Sunni-majority provinces recorded the highest percentage of votes in favor of the moderate candidate, and the ultimate victor, Hassan Rouhani.

At a recent function hosted by Rouhani, however, Abdulhamid openly stated that he was there to complain about the "serious discrimination" against his fellow Sunnis that still lingers 40 years after the Islamic Revolution. He urged the president, as well as the supreme leader, Ayatollah Ali Khamenei, to personally address Sunni grievances, taking the matter into their own hands for the sake of national unity.