Tehran's Sunnis still waiting for their own mosque

The campaign pushing for Iranian authorities to allow the construction of a purpose-built Sunni mosque in Tehran is gaining steam. 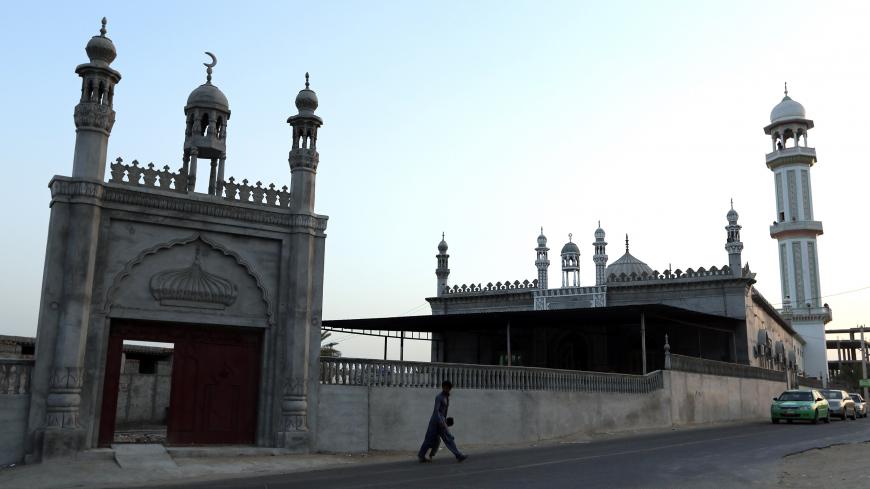 An Iranian Sunni mosque in the Teis district of the southern coastal city of Chabahar, Iran, May 11, 2015. - ATTA KENARE/AFP/Getty Images

"Mr. Rouhani! No need to give them positions in your administration — just allow them to have a mosque to perform the Eid al-Adha prayer."

Reformist parliamentarian Mahmoud Sadeghi addressed these words to Iranian President Hassan Rouhani in a Twitter post from Sept. 1, while communal prayers marking the major Islamic holiday of Eid al-Adha were being performed all over the country. Sadeghi attached an image to the Twitter post showing Sunni worshipers standing in a long line on a street in Tehran's Sadeghiyeh district. A few days later, Hojjat Nazari, a newly-elected member of Tehran's City Council, said in a speech, "Certainly, Sunni citizens are also entitled to their own places of worship in Tehran. The city management is asked to follow up on this issue."

The issue of building a mosque for the Sunni residents of Tehran has long been a topic of discussion among Sunni elites, members of parliament and civil rights activists. However, the Iranian government insists that Tehran already has Sunni mosques. On Aug. 5, 2015, the website of the Mosques Affairs Regulating Authority reported that Tehran has nine Sunni mosques. According to prominent Sunni figures, however, these are merely prayer rooms.

In an interview with Al-Monitor, former Sunni parliamentarian Jalal Jalalizadeh noted that Tehran's Sunni residents do not have a place that can be called a mosque and that the prayer spaces available to Sunnis are "rented houses," meaning that the property owners can evict them "at any given moment." He added, "Mosques, on the other hand, have a particular identity and a set location. One cannot refer to a private house that does not have [a relevant] identity as a mosque. When we don't have the right to broadcast a call to prayer or have a sign, then we have a prayer room and not a mosque."

Even these prayer rooms have faced restrictions and limitations in recent years, especially during Eid al-Adha and Eid al-Fitr. On Jan. 9, 2015, while the International Islamic Unity Conference was taking place in Tehran, Saham News reported that law enforcement officers had prevented Sunni communal Friday prayers from being held in Tehran. The prayers were scheduled to be led in the Sunni prayer room in the western district of Pounak, under the leadership of Abdul Hamid Ismail Zahi — a famous Sunni figure in Iran who is better known as Molavi Abdul Hamid.

After this incident, the prayer room in Pounak was closed down temporarily by law enforcement officers. On Jan. 18, 2015,ars News Agency, which has close ties to the Islamic Revolutionary Guard Corps, reported that the "real reason" the Pounak site was closed down was that it was both illegal and also used as "a means of recruiting foreign citizens."

On Jan. 29, 2015, the Tehran municipality demolished the Pounak prayer room with the backing of law enforcement. Sunni Online, a website dedicated to the affairs of Iran's Sunni community, reported, "Security forces went to the prayer room in Pounak and, after confiscating the cellphone of the Friday prayer leader of this prayer room, Abdullah Musazadeh, and inspecting his private residence, dozens of municipality employees started to demolish the building."

Aside from parliamentarians and Sunni prayer leaders who condemned the demolition, the Forum for Proximity of Islamic Schools of Thought also issued a statement denouncing it, saying, "The catastrophic incident of demolishing the prayer room of our Sunni brothers in Pounak district of Tehran has broken the hearts of all those who are concerned about the unity of the Islamic ummah, regardless of their own religious tendencies, and requires much reflection."

Government officials did not react to these objections, and only a few Principlist media outlets close to the Iranian state reported on the issue. For example, on Aug. 6, 2015, Mashregh, which is linked to the Islamic Revolutionary Guard Corps, reported that certain parts of the building housing the Pounak prayer room were demolished because violations and change in usage were happening in the structure: "The management of this prayer room had built stairs going from the underground to the ground floor to make the building look like a mosque. … This means that a ‘housing unit’ had been converted to a 'communal mosque.'"

Jalalizadeh, the former Sunni parliamentarian, told Al-Monitor that, in recent years, the right to build a structural, purpose-built mosque in Tehran has become one of the main demands of Iran's Sunni community. Nonetheless, he believes that "there is no intention of allowing the Sunni community to build mosques." He added, "Ordinary people have no problem with Sunnis and Sunnis building their own mosques. Only the government, and in fact only certain factions of it, are opposed to this."

In response to the Pounak site being demolished, Abdul Hamid wrote two separate letters — one addressed to Supreme Leader Ayatollah Ali Khamenei and the other to President Rouhani. In his letter addressed to the supreme leader, Abdul Hamid noted that Sunni residents of Tehran are not allowed to have a mosque of their own and remarked, "At a time like this, when extremism, excommunication, violence and division are becoming widespread and the Islamic world requires tranquility and tolerance, Sunni brothers and sisters did not expect such a treatment."

Abdul Hamid's letters went unanswered at the time. In an interview with BBC Persian on Oct. 30, 2016, he mentioned this and said, "They do not answer [the letters] since there is no convincing answer. According to the constitution [of Iran], people enjoy certain rights, but then there is a narrow-mindedness that prevents people from enjoying their full rights."

On Aug. 6, 2017, however, Iranian media outlets published an image of Abdul Hamid’s most recent letter to the supreme leader and Khamenei's answer. In his Aug. 2 letter, Abdul Hamid had emphasized "the importance of greater religious freedom and especially the freedom to conduct daily prayers and Friday prayers in major cities such as Tehran" for members of the Sunni community.

Khamenei's answer, written by his chief of staff, Mohammad Mohammadi Golpayegani, on Aug. 12, read: "All elements of the Islamic Republic are required, in accordance with the religious teachings and the constitution, to refrain from allowing any discrimination and inequality among Iranians regardless of their religion, ethnicity or race."

Jalalizadeh hopes that the Islamic Republic will change its behavior toward Iranian Sunnis, not only when it comes to building mosques, but in all dimensions of citizens' rights. He told Al-Monitor, "Why should citizens of a country be deprived of building a place of worship in the capital city of that country? Even in Sunni-dominated areas where the Shiite residents number less than a hundred families, there are still Shiite mosques and hosseiniyehs [Shiite worship halls]. Having a place of worship, be it a temple, mosque or church, is the right of every citizen, and it is against the law and human rights to take this right away. The only person who can solve this problem is Ayatollah Khamenei." He added, "Nothing is impossible. I believe that there will come a time when Sunnis can have their own mosques in Tehran."