The eight-year war between Iraq and Iran ended on Aug. 20, 1988, but its negative impacts linger on both sides. 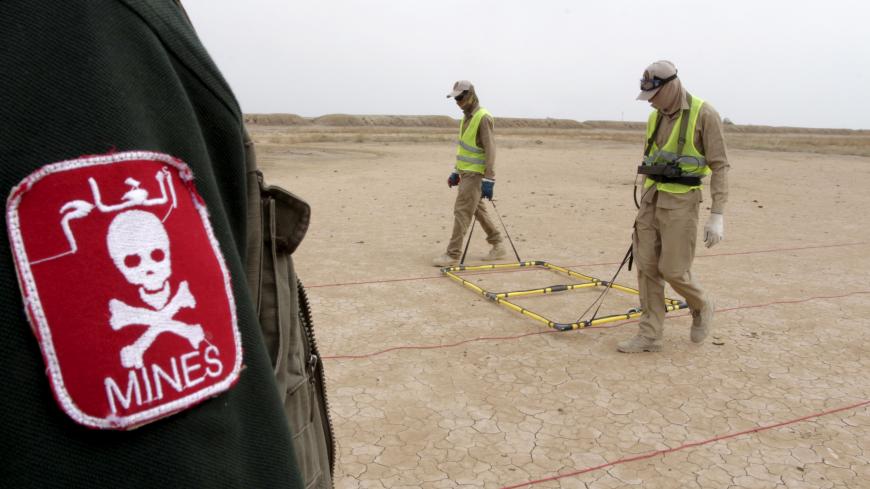 BASRA, Iraq — The area surrounding the long border between Iraq and Iran conceals much of the tragedy of the eight-year war the two countries fought from 1980 to 1988. Beneath the ground where tens of thousands of people cross in both directions lie more than 20 million landmines, most of them in Iraq. They pose a serious threat to the lives of those who survived the war and those born after it.

Ammar, who recently celebrated his 10th birthday, lost the sight in one of his eyes, while his brother Hasan suffered an even worse fate near their house near Shalamja.

“The boys wanted to go play after coming home from school,” Said Ali, their older brother, told Al-Monitor. “They walked a few meters, and something went off.” They had no idea there were mines and cluster bombs in the vicinity.

“We were later told by authorities that they were from the Iraq-Iran War,” Said Ali stated. “Ammar lost one eye, and Hasan, who’s older, lost both. We tried to treat them here in Iraq, but it wasn’t possible. We had to take them to India, but we didn’t continue the treatment, because we didn’t have enough money.”

Indeed, money is a big problem for the people of Basra.

“We see the flames coming out of the oil fields since forever,” said Mustafa, an unemployed man from the city who has taken part in the demonstrations that erupted in July to protest the lack of jobs and services. “The only thing we get from the flames is heat. The money goes to Iran and America.”

According to Mustafa, Iran has power over oil prices.

“Iran doesn’t want us to progress,” he claimed. “It’s the revenge of the war in the eighties. We are not allowed to have factories so that they sell their products here. They work behind the scenes with the US to share our wealth.”

The bitterness of the Iran-Iraq War remains alive in Mustafa, who had been 20 when the conflict ended. “I went to the army when I was 18 and was lucky enough not to be killed in the war,” he said. “Many of my friends lost their lives to keep Iran [at bay]. It was an absurd war. Saddam is gone, and Iran is now in Iraq.”

According to Amin, a young man in his twenties, Mustafa’s negative sentiments toward Iran are common here in Basra, but some regard Iran as a savior.

“The older generation still lives in the shadows of the war,” he said. “They can’t forget what happened, but for us, we only know about the US invasion and later the Islamic State war. The only side we saw helping us was Iran. We know that they have interests in Iraq, but who doesn’t? At least they are helping!”

The Iran-Iraq War ended on Aug. 20, 1988, with a cease-fire and both countries’ forces withdrawing to their original positions. In their wake, they left behind some 1 million people dead and more than 350,000 injured or disabled.

According to the International Committee of the Red Cross, tens of thousands of soldiers remain missing. The fate of tens of people was discovered in 2018, when their corpses were found along the border and repatriated. The body of Hadi Abd Ali’s father wasn’t among them, or so Abd Ali says.

Abd Ali was three years old when his father disappeared while fighting Iran. Al-Monitor heard from one of his family members that his body had been recovered, returned to the family and buried, despite not being able to recognize him from his face.

“There were no DNA tests at that time,” Abd Ali remarked. “It wasn’t his body. My mother always said it was another person, but my grandfather was forced to sign the papers and take the body to close the file.”

Abd Ali’s story isn’t rare. Many families believe the body of their lost loved one is still missing, creating a sense of uncertainty in their lives.

“I know my father was just another soldier,” Abd Ali said. “He was not going to change anything in the course of the war, but we have the right to get his body and bury it instead of the false body we have.”

The war to an orphan like Abd Ali, and likely others, wasn’t worth the numbers who died. “Saddam wanted to fight Iran,” Abd Ali observed. “Saddam fell, and Iran is in Iraq. People today can see pictures of Iranian leaders in some Iraqi cities, while Saddam’s picture can’t be hung inside a house in Iraq. Who do you think won the war?”

Thirty years after the war's conclusion, some issues between Iran and Iraq are yet to be settled. Following the Aug. 7 statement by Iraqi Prime Minister Haidar al-Abadi that Iraq would comply with US sanctions imposed on Iran, members among Tehran’s political elite called on Baghdad to compensate Iran for the war with $1.1 billion. Among them was Heshmatollah Falahat Pisheh, head of the parliament’s Foreign Relations and National Security Committee, who said, “Iraq can afford to pay war reparations to Iran. So, we expect this to be done according to Article 10 of UN Security Council Resolution 598.”

The issue of compensation is controversial, with some Iranians demanding it, but Iraqis believing that their country has no such obligation under UN resolutions. Iran has never officially sought compensation from Iraq.