The new leader of the opposition council in western Aleppo plans to implement projects to benefit women and develop their potential. 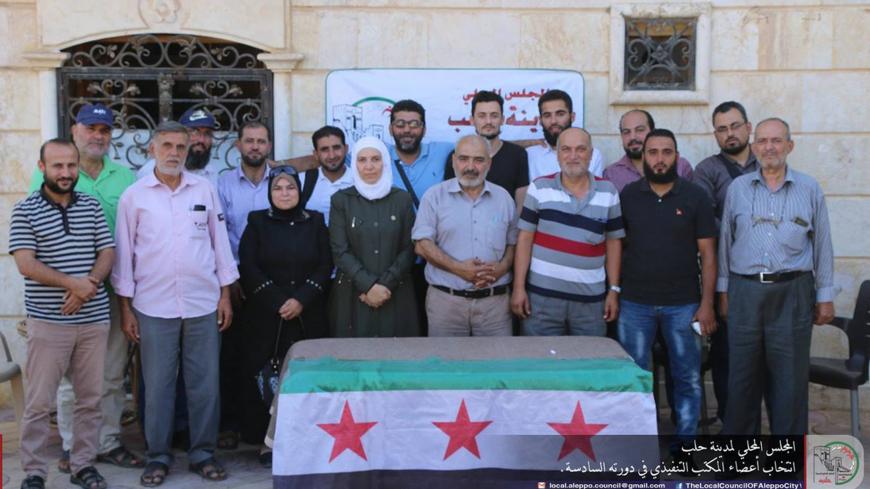 Iman Hashem (4th from left) is a schoolteacher who leads the Syrian opposition’s local council in the western area of Aleppo city. Posted July 11, 2018. - Twitter/SyriaDirect

ALEPPO, Syria — A woman is taking the reins of the Syrian opposition’s local council in western Aleppo for the first time in the organization’s six years.

“I am very happy to be elected head of the local council,” Hashem told Al-Monitor. “I consider myself a representative of the opposition women in Aleppo. I dedicate my victory to all of these women. Although I was running this election in a conservative society, I have not encountered difficulties for being a woman. The people around me are very supportive, especially my family and my husband.”

The council manages the six districts in the city’s western suburbs still controlled by the opposition Free Syrian Army (FSA). In December 2016, President Bashar al-Assad’s forces captured the city except for those districts.

Hashem said that after she was displaced by Assad’s forces from the eastern districts of Aleppo city, she worked in education and opened a school called Sanoud (“We will be back”) in the city’s western countryside.

She was head of the local council’s Social and Educational Affairs Office in 2015. Hashem also opened the council’s office for women, supervised several centers for empowering women in Aleppo and was a council member for two terms. She was a member of the executive office for the 2015-2016 term.

Following the outbreak of the revolution in 2011, Assad legalized "local administrative bodies" as part of a reform package meant to decentralize power in an effort to quell protests. The opposition Syrian Interim Government later borrowed language from these reform decrees to use as legal justification for its own councils.

Hashem said she has many projects she plans to implement during her one-year term leading the council.

“I have in mind projects aimed to provide more health and education services, and other services for the displaced from the eastern districts of Aleppo. The council will keep carrying out its routine works, which will focus on meeting the needs of the six districts.”

Cleaning and water services also will be secured, she added, and she plans to follow up on the situation of women whose husbands were killed while fighting the regime.

“The council will also cooperate with local and international associations and organizations that are still supporting the work of the local council,” she added.

Hashem said she will pay particular attention to awareness campaigns and educational and training courses for empowering women, who are now assuming a lot of responsibilities under the current circumstances.

She said the work of local councils in opposition-controlled regions of Syria shows the opposition can manage its areas in an institutionalized and democratic manner and is capable of producing a conscientious, transparent and healthy leadership far removed from injustice and favoritism.

Ahmed Aziza, media office director for the Aleppo opposition council, told Al-Monitor, “These are residential quarters housing tens of thousands of displaced from the eastern districts and other local [areas].”

“This support continued despite the FSA's loss in the eastern districts. … In addition to managing the western suburbs of Aleppo, the local council provides assistance to thousands of displaced people from Aleppo living in different areas in Idlib [about 40 miles southwest] and the northern Aleppo countryside, and other areas,” he said.

The western area of Aleppo city also has a Revolutionary General Assembly, which includes many opposition figures who had worked in eastern district councils when those areas were still controlled by the FSA. The assembly also includes independent figures overseeing and assessing the work of the local council and submitting proposals on elections and others matters.

The choice of a woman to lead the council in western Aleppo is expected to set a precedent for the opposition. Hashem seeks to improve the status of women by focusing on projects that develop their capabilities. This will depend, however, on how much support the council continues to receive from international donors as well as from the Syrian Interim Government.