Televangelist Adnan Oktar, who sparked both imaginations and outrage with his unconventional blend of sexuality with Islamic doctrine over decades, is accused of organized crime, espionage, sexual assault and more. 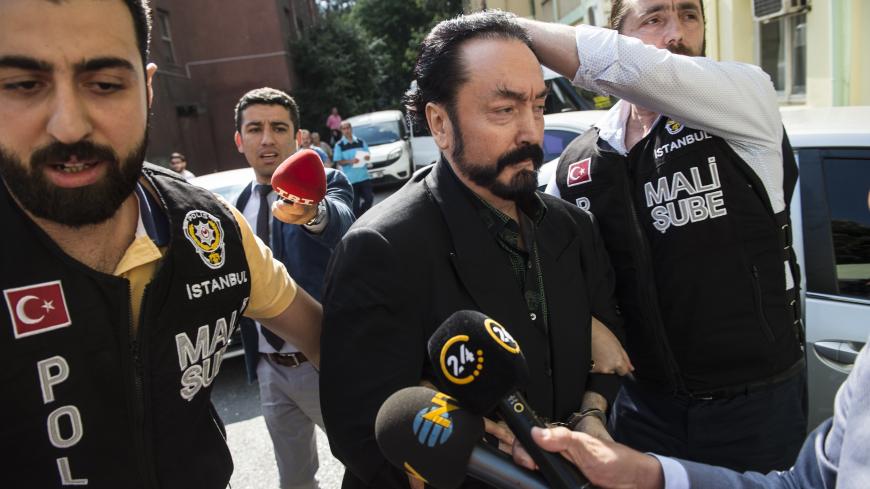 Turkish police officers escort televangelist and leader of a sect, Adnan Oktar (C) on July 11, 2018, in Istanbul, as he is arrested on fraud charges. - AFP/Getty Images

Turkish police detained an eccentric religious leader and hundreds of his devotees on Wednesday on charges ranging from spying to sex abuse, thrilling one ex-disciple who described the group as a cult that imprisons its followers.

Adnan Oktar, a 62-year-old televangelist whose adherents include buxom beauties and young men in tailored suits, was detained in a pre-dawn raid at his Istanbul home, part of operations conducted in five provinces across the country to apprehend 235 suspects, reported the state-run Anadolu news agency. All 235 suspects have had their assets seized and the state has appointed administrators to run affiliated companies.

A statement from Istanbul police listed a litany of charges against Oktar and his group, including organized crime, child sexual abuse, kidnapping, blackmail and espionage. Oktar told reporters his arrest was part of a plot by the British.

A senior member of the group denied the charges, saying in a Facebook post that "dark centers" had misled authorities. "We believe in our state. With God's permission, this conspiracy will
prove inconclusive, just as previous ones have, and that the truth will emerge within the framework of the law and rights," the statement said.

Ceylan Ozgul, 36, who fled the group last year and filed a complaint with the authorities, said, “Today is a splendid day. The streets of Turkey have been cleaned of a filth.” She told Al-Monitor that her testimony and others from former followers had helped build the case against Oktar.

“Thousands of people have been harmed by this man, but they were all afraid of him. That’s why he has been able to evade justice until now,” she said.

Numerous religious sects are tolerated in Turkey, despite a wider clampdown on other parts of civil society following a failed 2016 military coup that has allowed President Recep Tayyip Erdogan to consolidate power. On Monday, he was sworn in as a vastly empowered president, following changes to the constitution he designed and won approval for in a 2017 referendum.

Oktar heaped praise on Erdogan, expressing support for the expansion of executive powers and echoing the president’s claims that foreign powers were seeking to undermine him.

But Oktar’s intriguing blend of sexuality with Islamic doctrine had faced official censure in recent months, including a war of words with the country’s top imam. For years, he has been dogged by allegations of wrongdoing, including the use of sex, drugs and blackmail to lure young followers.

With a taste for designer suits, the charismatic, rotund Oktar became active in the 1980s and is said to now lead about 300 followers. On television programs, he spent hours expounding on Islam and politics to a studio audience of adoring men and women.

“Kittens,” as he called his statuesque, surgically enhanced female disciples, danced on air for their “hoca,” or master. Oktar argued that the Quran did not require women to cover and that he was countering a negative image of radical Islamists who subjugated women.

Outside of Turkey, Oktar drew attention with more than 300 books about religion and science, written under the pen name Harun Yahya and translated into dozens of languages. He retracted his earlier anti-Semitic writings and said he wanted to improve relations between Muslims and Jews, deploying envoys to meet Israeli Prime Minister Benjamin Netanyahu and members of the Knesset.

He undertook an anti-evolution campaign that included an 800-page glossy tome, “Atlas of Creation,” published in 2006 to promote a Muslim version of creationism. He distributed thousands of copies of the book to schools and researchers in the United States and Europe, prompting accusations from the Council of Europe that he was spreading extremism.

In 2008, he was convicted of forming an illegal organization for his own personal gain, accused of entrapping the children of well-to-do families with cocaine or by filming them engaged in sexual acts to use for blackmail. The conviction was overturned two years later.

Oktar had been able to dodge prosecution more recently in part because “he bent over backwards to demonstrate his loyalty to Erdogan,” said Howard Eissenstat, a Turkey researcher at St. Lawrence University and a senior non-resident fellow at the Project on Middle East Democracy.

The most prominent Turkish sect to fall from grace is the movement behind Fethullah Gulen, a Muslim cleric in self-imposed exile in Pennsylvania. His followers spent decades moving up in Turkish bureaucracy and security forces and building business empires worth billions of dollars. The movement was a key ally to Erdogan in the first half of his rule, helping him tame an interventionist army with a series of mass trials of military officers.

But Gulen and Erdogan began to turn on each other in 2010, and the preacher is accused of masterminding the 2016 coup attempt, which he denies. Tens of thousands of suspected Gulenists have been jailed or sacked from their state jobs in what the United Nations has said is a process rife with abuse.

“Oktar’s arrest may demonstrate a demand for a rough religious orthodoxy,” said Eissenstat. “The room for religious dissent in Turkey — never strong — is becoming increasingly narrow. I am certain that Erdogan, whose vision of Islam is very much that of the working-class suburbs, found the miniskirted ‘kittens’ morally repugnant and un-Islamic, beyond any possible political threat the group must have posed,” he said.

Earlier this year, Turkey’s broadcasting watchdog suspended Oktar’s television program on a channel he owns, ruling it undermined gender equality and encouraged abuse of women. It found the program objectified women and sought to “degenerate the moral values of society,” including efforts to “normalize revealing clothing.”

Oktar frequently railed against Great Britain, saying it harbors a deep state that is bent on destroying the world order, prompting droll responses from Britain’s former ambassador to Ankara.

Engaging in such absurdities was actually a tactic to distract from the group’s dark side, said Ozgul, explaining, “They created this showcase with the ‘kittens’ so that no one would take them seriously, concealing their crimes.”

Ozgul said she first tried to leave the group in 2013 but was caught and held prisoner at Oktar’s estate. She escaped last year after she was moved to a less restrictive compound.

“There was no prince on a white horse to save me. I have worked to rebuild my life from scratch,” she said. “There are deviant evangelical cults all over the world, and my message to women everywhere is that you can start over.”